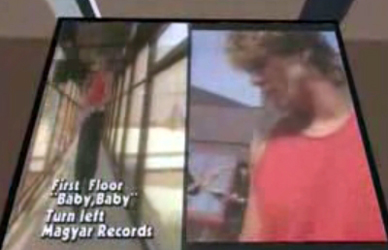 These days, if Americans fancy a thought of First Floor at all, they remember us getting slagged by The Dire Straits in their "Money for Nothing" cartoon. They lifted our video for "Baby Baby," and their singer - speaking in character as an appliance-toting ruffian, I might clarify - says of me "that little faggot got his own jet aeroplane/that little faggot, he's a millionaire." No worries, because frankly, I did look like a bit of a poof back then, and we did have rather the riches. But fortune hasn't always smiled on First Floor in recent years: For example, I had to sell our aeroplane long ago. Oh, I'm getting ahead of myself. Stay a spell as I go through the First Floor photo album! 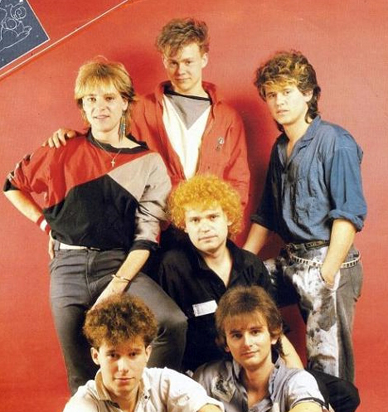 My, we were radiant back then! That's our drummer Terence with the tangerine curls, which caused a spot of controversy. Seems he had them coloured through a process that involved capturing a particular type of lizard, placing the wriggling buggers in a blender, and applying the resultant fluorescent essence directly to the scalp. The little beasts are rather extinct now, but that's hardly Terence's doing, at least not exclusively. The chap with the dangly earrings, dainty wrists and ladylike tresses is Kisszabo, our bassist. He comes from a culture with a different understanding of gender roles. Our keytar player Sparks has his hand on Kisszabo's shoulder - it was years before we finally told that scrappy runt that the object of his infatuation was a man. That was an awkward flight. 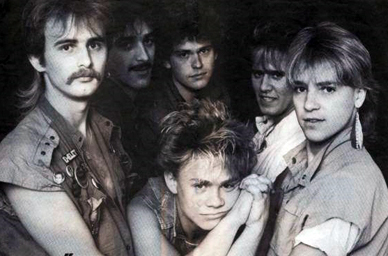 The strapping gent on the left is our bongo player Bill. I dare say The Dire Straits might have never called one of us "faggot" if we all looked like Bill, because there's nothing manlier than a burly moustache! Sparks is still mooning over Kisszabo. A hideous apparition lurks behind that star-crossed pair, a spectre that began appearing in our photographs right around this time. I must stress that this monstrosity, which we dubbed Bugly, was never an official First Floor member, but it haunted our promotional images as well as our dreams. We attempted to conjure and exorcise it without success. I sheepishly admit that I pleaded with the ghastly visage to visit The Dire Straits instead. 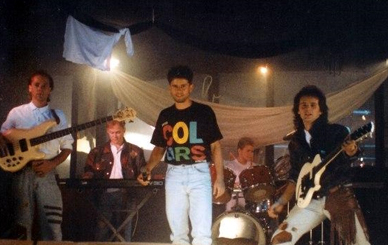 More than anything in the world, I love colours! I wore this shirt every day during 1985, and the letters faded until they became a mockery of the very message they spelled! How I missed colours throughout the '90s, when I was too destitute to afford an exotic palette. Gray was my face, gray was the gruel on which I subsided, gray were the grimy rags in which I swaddled myself, gray was my wretched soul! It's worth noting that our guitarist Roger has girded his loins with a freshly skinned cow. Among '80s new-wave acts, we ranked near the top when it came to decadent animal slaughter! It was a pricey pursuit, which is why we practiced in the laundry cellar instead of a proper rehearsal space. 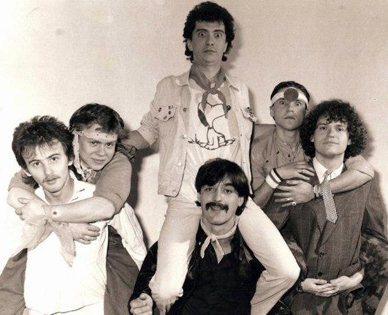 Oh, dear, let me straighten out the bedlam. I'm sitting astride Bill, who is taking me on one of his famous "animal rides." He once knocked me silly on a low-hanging overpass while under the guise of a giraffe! Sparks still stokes his heart fires for Kisszabo, even though his beloved has started to look stridently laddish. The bloke to my right is Saito, who only lasted a fortnight. He immediately became fiercely protective of Terence, to the extent that he clung to him in this desperate fashion even while Terence tried to drum. Perhaps you shan't believe me, but I swear the hands around Terence's waist also belong to Saito! We believed his four-armed endowment would pay instrumental dividends, but unfortunately his lunatic possessiveness prevented him from even touching the timpani. 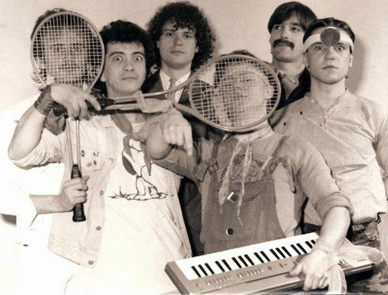 We were always a sporting bunch, at least when it came to gentleman's pursuits such as tennis. As you can see, even during times of leisure, Saito remained dangerously intense. Granted, we wouldn't let him play, but you can hardly fault us for discriminating against him thusly, given the ludicrous advantage presented by his freakish appendage surplus. "But Kiko," readers might volunteer, "you, too, look every bit the bug-eyed maniac!" I attribute my deranged expression to Bugly, who was favouring me with a sickening grin. 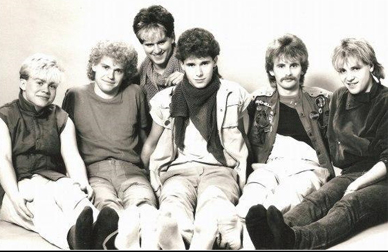 Bugly always hovered around my head, a floating grotesquerie. Why was I singled out for its torturous attentions? For that matter, why was I the "faggot" in The Dire Straits' farce, even though I believe myself to be, objectively speaking, at least the third least faggoty member of First Floor? I came to understand that the front-man of a group assumes certain burdens, which can mean enduring solicitations from unsightly ghosts, weathering good-natured yet inadvertently career-crippling abuse from other musicians, and absorbing a four-fisted pummeling from a mutant your bandmates voted to dismiss.