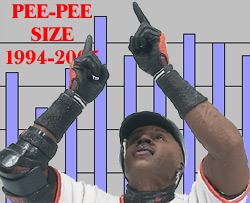 By the end of the year, Barry Bonds will mostly be made of plastic.Since I played baseball in high school up until the time I quit to spend more time on my BBS playing multiplayer Doom 2, I pretty much know everything there is about our National Pastime. I'm certainly more qualified to predict the results of the upcoming baseball season far better than any "expert" at ESPN or Sports Illustrated can. So here's your real, 100% accurate 2005 MLB preview:

Now that Barry Bonds is unable to keep himself alive with illegal drugs that have ominous names like "The Clear" and "The Doomsday Solution," his body implodes upon itself before he's able to break Hank Aaron's all-time home run record.

During his tearful retirement speech, a taped-together Barry blames the media and Redd Foxx for forcing him to take steroids. Next, Bonds brings his infant son up to the stage and screams at the child for 10 minutes until he bursts into tears. Barry then turns to the assembled reporters and asks, "are you happy now? You made my son cry!"

Finally, Bonds hooks his laptop up to a projector and launches into a two-hour PowerPoint presentation entitled "My Pee-Pee is No Wee-Wee," in which Barry explains in excruciating detail how using steroids has not affected the size of his penis at all. Tragically, just as he's about ready to wrap things up, his left leg suddenly disintegrates in a violent puff of smoke and Bonds falls backwards into an active volcano to his fiery, violent death.

Lots of people hate the New York Yankees because the team has an unfair advantage over all the others: they can spend the most amount of money on players. Oh, and they also hate the Yankees because Steinbrenner is kind of a dick. 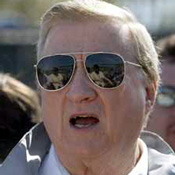 The most flattering pic of Steinbrenner I could find.

But getting back to the payroll thing: to put things into perspective, the Yankees enter 2005 with a payroll exceeding $200 million. The Yankees are in the same division as the Tampa Bay Devil Rays, and their payroll is $32 million. It's the sporting equivalent of pitting a featherweight boxer against a fully-manned M1 Abrams Battle Tank.

I grew up a Yankee fan and I'm proud to say I was a fan when the team completely sucked. Back when they had jerks like Wade Taylor, Matt Nokes, Jesse Barfield, Danny Tartabull, Hensley "Bam-Bam" Meulens, Alvaro Espinoza, and Kevin Maas. So yeah, I enjoyed the three straight World Championships and all that, but enough is enough: the Yankees need to stop making the playoffs and go back to being a complete and utter disaster.

And all signs point to this being the year the Yankee gravy train derails, flips over, and careens into an overcrowded orphanage. The Yankees are now literally the oldest team in the league, with an average player age of 32. 32.Guys that age should be worrying about how to discreetly ask their doctor for extra shots of Rogaine and more free samples of Viagra. They shouldn't be playing professional sports.

And at this point Joe Torre has got to be pretty sick of working for the world's worst boss. By mid-season, he's going to have Steinbrenner calling him up at 4am screaming, "I GAVE YOU TWO STARTING PITCHERS OVER THE AGE OF 40 AND YOU'RE ONLY 3 GAMES OVER .500?! WHAT IS WRONG WITH YOU!!!"

After the Yankees miss the playoffs, Torre is gone and the Yankees can return to the mediocrity they so richly deserve. It'll be like the recent collapse of the LA Lakers, just with less rape. 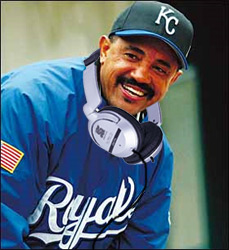 DJ Tony Pena can serve up both block rocking beats and 6-game losing streaks with ease.

DJ Tony Pena Spins the Kansas City Royals to a Near .400 Winning Percentage

When Tony Pena took over as manager for the Royals, he immediately uttered this little gem:

"I am the new DJ, I play the music and you have to dance. If you don't know how to dance, get off the dance floor."

This totally confused all the Royals players. "Wait a minute... so baseballs... are records?" one asked. "No, I think the baseball bats are CD players," another guessed. Surprisingly, the confusion spawned by this terrible analogy led the team to accidentally posting a winning record in 2003. But last year things returned to normal and they're all just a bunch of losers again.

This year, Tony Pena has plans to boost the wattage of his speakers, implement samba in his bullpen, and teach the foxtrot to the middle infielders. The results? They'll waltz to the bottom of the AL Central in style.

A lot of experts think the Royals will be the worst team in the league, but I'm going to boldly predict they'll only be the 2nd or 3rd worst and may even have a chance of getting close to .400. Great job, DJ TonyP!

Bud Selig Remains Commissioner Despite the Fact he Really Sucks 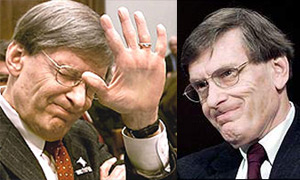 You'd think a guy named "Bud" would be amazingly attractive, but with Mr. Selig that's just not the case!

But even if you put aside his poor personality, horrible public relations skills, and camera unfriendly exterior... he still really, really sucks. I guess this shouldn't be a shock; who in the hell thought, "gee whiz, this guy is doing such a wondeful job running the Brewers that we should promote him to be in charge of all of baseball!"

If you want to know what it's like to run Major League Baseball yourself, play this old (and very realistic) Flash game entitled "Baseball Ballyhoo." Some of the references are painfully dated now (remember contraction?), but it's not like you're paying for this garbage or anything.

Baseball Continues to Alienate Fans and Decline in Popularity

I think this prediction is pretty safe.