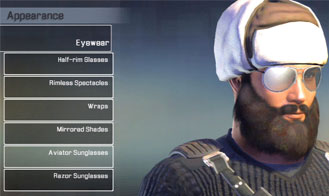 Alpha Protocol is an upcoming spy RPG from some of the people who brought you Star Wars: Knights Of The Old Republic 2, Vampire: The Masquerade - Bloodlines, Lionheart: Legacy Of The Crusader, and even some games that were mostly finished when they went on sale.

Choice is the central theme, driving everything from your character type (Bond, Jason Bourne, Cody Banks, Jack Bauer, etc.), to conversations, to your progression through any given level, to the central storyline. To give you a better idea of how deeply these decisions will be, let's look at a few choices from the game's first few hours.

You're playing high stakes poker in a fancy hotel. People are wearing suits and everything. A mysterious Russian beauty brushes her ankle against yours and asks you to light her cigarette, which is not gross because it's in one of those long thin holders.

- Light her cigarette with a lighter.

- Light her cigarette with a match.

- Tell her that smoking can be dangerous to her health, then blow smoke in her face even though you're not smoking.

- Light the cigarette by rubbing your thighs together enthusiastically for nearly a three minutes, totally turning her on in the process.

You manage to capture a high-ranking terrorist. He knows about an imminent train bombing in the United States, but won't talk until you stop holding his hat behind your back and making him guess which hand it's in without any intention of giving it back.

- Give the hat back to the terrorist.

- Tie him to a chair, then dangle the hat from a chain just inches over his head.

- Shoot the terrorist, ship the hat to a secret location for questioning.

- Call the terrorist's bluff by denying the existence of trains in America, but secretly blow them all up yourself so he can't get to them.

- Rub your legs together enthusiastically and see what happens.

- Crawl in through the air vents, hack the security system, override the closed circuit cameras, dangle from a wire to avoid movement-detecting lasers, then just live down there rent free until someone notices you in a few months.

- Go the guns blazing route. Shoot everyone you see. Punch everyone you don't. Set fire to everyone that runs. Once you're out of your hotel, ditch the guns then make your way to the embassy and ask politely for permission to come inside.

Alan Wake
More like Max Payne than the revolutionary mystery-adventure everyone was expecting thanks to vague PR and marketing, but hey, Max Payne's pretty awesome. 9/10

Skate 3
Remember when Skate was the thing that made Neversoft look silly for churning out the Tony Hawk games without significant improvements? 6/10

Nier
Deeply flawed but unique enough to make up for its shortcomings if you're the forgiving sort, this is pretty much the Southland Tales of video games. 6/10

Lost Planet 2
When it was revealed that the Gears Of War characters would be making an appearance, everyone who lived through the Soul Calibur/Star Wars incident should have had flashbacks and immediately hid under a desk. 4/10

Iron Man 2
This is the game you make for people without souls. 1/10

3D Dot Game Heroes
Most of the charm of this shameless Legend Of Zelda clone lies in the character customization and graphical style, and the game's style is way less creative than it thinks it is. 5/10