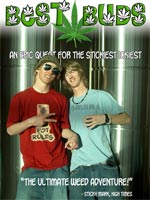 Tagline: An epic quest for the stickiest ickiest.

Dookie Dank: Holy boners! He's made out of weed smoke!

Chet Dank: Hey bonerfaces!
Jamie Kind: Hey, Chet.
Dookie Dank: God Chet, don't you have somewhere else to be, we've got this ghost mystery to unravel.
Chet Dank: Uhhh, okay bromos, you gay yourself back to that, me and your girl will trade spit in the bedroom!

Jenny Sensimilla: Hey! Get your hands off of me!
Dookie Dank: That's it! I am so mad! Chet I will kick you in the face if you don't back off!

FBI Agent Harsher: Don't worry. We'll be waiting for them at the smoke festival. They'll never get out.
Hootie Bowls: Good. I'll give you everything you need to put those juvenile delinquents away for life and you get me the location of the lost bud acres of Pancho Villa.
FBI Agent Harsher: I still don't think they're real.
Hootie Bowls: Oh they're real. If they're not real my name isn't Hootie Bowls.
(Heather Blaze is wearing a bikini and watering her weed car.)
Dookie Dank: Ho-lee boners! Are you seeing what I'm seeing?
(Jamie lowers his shades on his nose)
Jamie Kind: Motherboner, that is the hottest babe I have ever seen. Do you think she likes weed?
Dookie Dank: Bro, I think she likes weed (points to weed car).
Jamie Kind: Dude. Dude! I'm gonna marry her.
Hootie Bowls: Nooo! You don't understand! This is their weed!
Cop: Tell it to the judge.

Jamie Kind: Bro, it hurts to see that weed going to waste.
Dookie Dank: It is so worth it. We have a thousand boners full of Pancho Villa's finest weed just waiting for us.
(Heather Blaze and Jenny Sensimilla stick their heads out of the hotel room)
Jenny Sensimilla: Boys, I think you have something else you promised to take care of first!
Heather Blaze: I want an orgasm.
Jamie Kind: Oh my boners! We are so gonna score!

this is NBY FAR the funniest weed move of all time. When Jamie gets stuck in the revolving door and has to smoke his way out LMAO every time they yell BONERS! it's the best I also think this movie doesn't get neough credit for plot or special effects either. That ghost is spooky and hilarious too! It's pretty mucht he single movie that legatiamized pot smoking movies. Without this there would be no other pot movies after 2000. Vote yes on Issue 15! Or should I say VOTE BONRES!