The World of the Future According to the Past

Everyone's tried to predict the future in one capacity or another at some point. Maybe you've bet on sporting events or tried to guess the exact moment during the Emeril series premiere NBC executives decided to cancel it. Whatever the case, chances are your horribly inaccurate guesses probably weren't printed for the entire world to laugh about long after you're dead! It's 2006, and as far as anyone trapped in the past is concerned we're living in the future. Did anyone get it right? Were they even close at all? I spent yesterday at the library skimming through old books and magazines and copying down every blurb about the present I could find, so have a look for yourself. I predict you'll read at least some of them!

"[In the future,] the lady of the home won't be a lady at all, but a highly advanced android. She'll have all of the capabilities of the modern woman and more. Need your shoes shined in a jiffy? She'll have it done in seconds flat. Is your good china dirty? Say not another word. Fancy a beating? By all means! She cannot be bruised. Android technology will change the world for the better."
-- Ronald Brady, SCIENCES OF THE FUTURE, 1933

"Teachers of the future will need to be more alert, as their students will be much more crafty when it comes to covert communication. Where students today pass paper notes across classrooms, tomorrow's children may shine laser beams into each other's eyes using a form of Morse code -- a method certain to be undetectable by anyone but each other."
-- Jarin U., BEYOND TODAY AND TOMORROW AND THE DAY AFTER AND THE DAY AFTER THAT, 1979

"All of your grocery shopping will be done by machinery, as well as the preparation of food and the rearing of children. In fact, the only thing the adult human will have to do is sit still and not die."
-- Nancy Farmer, THE FUTURE IS NOT NOW... BUT SOON!, 1921 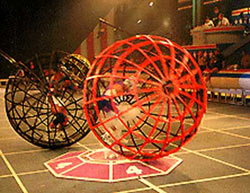 "Slender women will find themselves at a disadvantage in both fashion and social matters. Large, muscular women will easily defeat them in a futuristic battle arena for the right to mate with me, Ted Megaverse."
-- Ted Megaverse, MUSCLEFITNESS WEEKLY, 1984

"After the atomic wars, you may find yourself in need of nutrient pellets. If bargaining with local motor-cycle gangs isn't fruitful, you may be forced to trade your much sought-after skin for creditbucks at your local flesh bank. Dark-skinned folk will need not apply."
-- Geoff Wyman, HYPERFUTURE... MEGAPERFECT, 1951

"With the advent of global communications technology, language will evolve so quickly that this article may be unreadable by the year 2020. Ungrateful little shits."
-- Oscar Harris, TECHNOLOGY JOURNAL FOR HONOURABLE LADIES AND GENTS, 1920

"After war and famine have been stricken from our world, our species will give itself a purpose: To build an incredibly massive space craft that bends the laws of physics, enabling our species to travel faster than the speed of light. We will visit alien worlds, catalogue their life-forms, and catch up to our old television broadcasts. By firing our intergalactic engines at just the right moments, it may also be possible to pause and rewind live TV."
-- Scott Smago, FUTUREBOOK 2000, 1958

"The future man's drive home from work will be much faster and efficient than those we're used to. Everyone will have a personal rocket that launches them to the moon, using its gravitational power to slingshot them back to Earth and directly into their highly muscular wife's waiting arms."
-- George R. Megaverse, MUSCLEFITNESS WEEKLY, 1960

"As our societal intellect develops the human sense of humor will have greater needs than those provided today. Comedy of the future will require fart amplification devices to keep up."
-- C. Cardigan, FOR YOU, A DOCUMENT: I KNOW THE FUTURE, 1938

"Someone ... likely a decrepit man ... will find himself [confused] at the lake. He will try to steal my boat. Thinks he'll be able to get away with it because he's old."
-- Robert Catt, BASELESS ELDERLY PARANOIA DIGEST, 1988

"The most efficient language possible has already been developed, it's the CB radio ten-code system. 10-98, good buddy... What? Oh, sorry that was a mistake. There's no prison riot, I meant 10-99, as in 'mission complete, go home.' Yeah, those two are right next to each other."
-- Rocco Atun, interviewed 3 days before being killed in a prison riot, CB MEGASTAR MAGAZINE, 1978

Who knows. The future's not over yet, maybe it's we who are the fools for laughing at what is yet to come. Keep your eyes open because for all we know all of these are going to be correct sooner or later, and then boy, will our faces be red. Personally, I'd hate to have to explain the reason for all that to my muscular wife. They probably get mad really easily.