Year of the Dragon Shirt 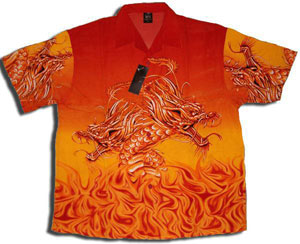 There comes a point in life when a friend or acquaintance approaches you wearing a garish silk shirt with a dragon design on it. This friend will then attempt to draw attention to said shirt, even though your attention is no doubt focused squarely on it already, and brag that he just bought it for $50 with the kind of naive pride that makes your skin crawl off your body and slither under a nearby rock to die. It is as if he expects his shirt to give you a massive fire-shooting dragon boner right then and there. In these dark moments you will undoubtedly be unable to feign enthusiasm, yet too cowardly to tell him how stupid the shirt looks. "Wow" or "that's an expensive shirt" are common diplomatic responses.

Should you actually be the unfortunate person wearing the dragon shirt, I have only mild pity for you and a desire to tear your skull open with blunt instruments and study your brain under a microscope. Even then, I do not think I would gain any deeper insight, and would probably just end up putting your brain in my fridge for a couple weeks until the smell gets to be too much, at which point I will clean it out and maybe get some more juice. If there is a sale, I might get a couple cartons just to stock up for awhile.

I have never wanted to own a shirt with dragon on it, let alone a button down silk shirt with a dragon on it that costs $50. Yet somehow these shirts appeal to certain types of human beings, seducing them like sirens of the sea into spending money on looking ridiculous. In this update, we will explore this controversial subject and attempt to gain a deeper understanding as to its roots and origins.

A Brief History of Dragon Shirts

Dragon shirts depict dragons, which are mythological beasts prevalent in the histories of a multitude of cultures. Dragons are more famous in Asian cultures, but let us not forget their role in European culture as well. Myths of brave knights slaying dragon still echo through time, causing feedback in the great sound system of history. Naturally these gigantic beasts were often brought to life in a variety of artistic mediums, because, well, actual physical proof of their existence is quite vacant. Dragons are not to be confused with dinosaurs, which are animatronic robots designed to entertain children at birthday parties. 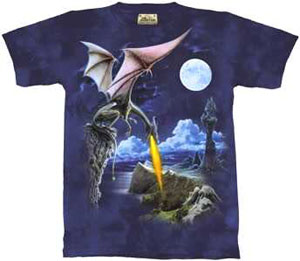 Not surprisingly, dragons were regarded as formidable. Ancient maps often sported illustrations of dragons in unexplored areas. In most cases, dragons did not actually occupy these areas, as none were ever found by subsequent explorers. It is possible they migrated, however.

A thousand or so years later some jerk got the idea to put pictures of dragons on shirts, thus concluding our brief history of dragon shirts and bringing us to the contemporary era.

Today, overweight males with bad haircuts are the primary wearers of dragon shirts. Simple research into the field of dragon shirt sales will show you that these shirts are often sold in sizes XL, XXL, XXXL, and MCMXCVIII. There is also a disturbingly high correlation between dragon shirt ownership and novelty katana ownership. Whether there is a valid relationship has yet to be proven.

Thomas Kinkade will only paint lighthouses while wearing a dragon shirt. Conversely, he wears leather chaps while painting cottages.

Ike Eisenhower had an entire room of the White House dedicated to storing his dragon shirts, which he would wear during official government functions.

Stephen Hawking does not like dragon shirts but sometimes he is dressed in them against his will.

Neil Armstrong was wearing a dragon shirt underneath his space suit when he first walked on the moon. Currently, that dragon shirt is on display in National Air and Space Museum next to a vending machine.

Captain Lou Albino mostly wears Hawaiian shirts, but when those are all dirty he sometimes wears a dragon shirt.

William F. Buckley Jr. will not debate without his trusty silk button down shirt depicting an Asian dragon breathing fire on a scantly clad barbarian woman.

J.D. Salinger owns over 457 different dragon shirts and his collection is still growing. He keeps them sealed in the same room as the catcher's mitt that inspired "Catcher in the Rye."

The reasons as to why some people wear dragon shirts have been elusive to most researchers, however two broad characteristics define dragon shirt wearers: A complete lack of self-esteem, or a lethal abundance of self-esteem. In either case wearing dragon shirts only furthers the problem without coming close to helping it.

In some enthusiast circles, it is believed that collecting a dragon shirt of each color will give you supernatural strength and the power of the dragons themselves, however that was disproved in 1987 by a team of Oxford researchers.

In summary, there is no known logical reason for anyone to wear a shirt with a dragon on it. 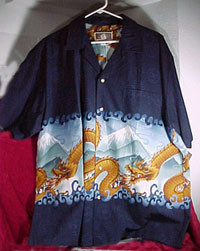 In 2000 the United States Census Bureau began asking residents questions about dragon shirt ownership. This is what they learned:

65% of dragon shirt wearers have ponytails.

67% have been to an anime convention.

67% reported experiencing true happiness for the first time at an anime convention.

26% believe that they actually are a dragon on the inside.

100% of dragon shirt wearers are lame.

I hope this update has been informative and enlightening, perhaps making it easier for you to cope with a friend or loved one foolishly donning a dragon shirt. If you are wearing a dragon shirt while reading this, I plead with you to take it off and discard it immediately. I also plead with you to immediately put on another shirt, because chances are your bare chest is unpleasant to look at.