Earlier this week, I brought you the tragic tale of the 250 billion dollars that the United States has squandered on the Iraq war and just a few of the totally awesome things that money could have purchased. At the end of my article I encouraged readers to email me their own ideas about better ways in which that staggering sum of money could have been spent. Sometimes I forget that a lot of people actually do read Something Awful and I was quite surprised to find more than 200 emails with various suggestions on the topic.

I had not planned on doing a follow-up to the original piece, but since my challenge prompted such an overwhelming (and often amusing) response, I have decided to showcase a number of the best ideas. There are dozens of ideas that I won't be including. Nearly forty people sent me varying numbers of "awesome gaming computers" that 250 billion dollars could purchase. A lot of people also sent me emails that looked something like Andrew's:

I know these aren't exactly awesome things to purchase, but I believe they are practical. With 250 billion dollars we could quintuple the projected american education budget for 2007. Fund all kinds of cancer/AIDS/ research. Fund alternative fuel resource development, since I don't particularly like the idea of my atmosphere being superheated by excessive CO2 production. Purchase 45,000,000,000 Oak trees and have enough BLAH BLAH BLAH BLAH

Thanks for your time,
Andrew Kade

Yeah, right, like cancer or AIDS research are way awesome. Man, forget buying 150 million drag racers, I can't wait to plant 45 billion trees! Andrew was the most concise of the Professor Borings who wrote in with their health care plans and their houses for the homeless projects. One guy wrote at least 1,000 words and had an attached graph that I think he probably made in whatever version of Excel manifests in midair when you do about ten hits of bad acid.

Others were a bit displeased with the subject matter for my update and couldn't see that I was attempting to make jokes through their thin-skinned bonerfacedness. Yes, bonerfacedness. 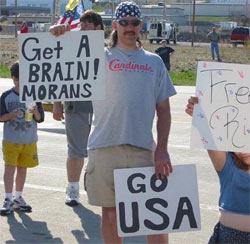 Thanks a lot. Now the one place I go every day to escape from politics has been fucking invaded by Real Life.

Everyone's got an opinion, but I go to somethingawful.com to escape from these ramblings. I want to read about how cool Indian movie posters are, or about Yellowjacket Greenapple, not some stupid shit about what is going wrong with the war. I could just watch the news for that. You build up your site as an escape from reality and a dose of well-needed humor. When did you start writing political opinion ads? shit.

Get a grip, or lose it again, or whatever. Go back to the way somethingawful used to be; irreverent and irrelevant.

Oh man, I am so totally sorry, Your Highness. At least "SurrealMind" had the decency to keep things short and sweet.

What is this, MoveOn.org? I'm not exactly a huge fan of the Iraq war myself, but I go to Something Awful to get some humor, not to get preached at. Consider this complaint *filed*, bitches.

Let's leave these Negative Nancy types in the dust and hear what way-rad purchases are budgeted for the next war's fiscal follies. Perhaps the most popular approach, next to gaming computers, was to spend all the money on some colossal amount of food.

$250 billion would buy approximately 2,272,727,272 Turduckens. And that's shipped next day. We could supply 1/3 of the world with three different kinds of tasty bird all stuffed gruesomely into each other all at once!

Boom! I can practically hear their agonized quacks and squawks!

Australian reader "infinitum" not only calculated the largest possible burger size, he did it after converting his crazy moon money to real red-blooded American dollars!

My brother works at McDonalds. So in order to help support their obviously floundering business, and thus ensure his continued employment, I eat there often. My pick is the Double Quarter Pounder, which rings up at around $4.95 in this hemisphere. One night I was driving him and his dumb buddies around while they had a higher alcohol concentration than Robert Downey Jr's sweat, and we stopped in at the Golden Arches. Within minutes, he returned to the car with what he dubbed the Double Pounder. Eight 1/4-pound patties, eight slices of cheese. It cost him about $16.50 - and his dignity.

With some quick extrapolation, we can ascertain the cost of the base burger setup (bun, sauce, raw onions - no meat/cheese), subtract that from our kitty, and then determine how many 1/4-pound patties and slices of cheese the Iraqi war chest would have bought us.

Zack, my dear friend, that figure stands at 181,814,546,493 of each. The American government should have bought me a 45.4 Billion Pounder. I would even have sprung for my own Coke.

Yeah, that's great and all, but how much more to add some mega bacon and put it on the world's biggest Krispy Kreme donut? No, wait, don't tell me, for no price would be too great for such exquisite gluttony!

Daniel D likes to feed his face, but only if it's for a good cause.

For 250 billion dollars every American the in the United States, including banner-waving illegal aliens, could recieve 212 boxes of Thin Mint Girl Scout Cookies. On one hand, obesity will skyrocket. But on the other, we'll be supporting breast cancer awareness.

Danny D, I don't think we want to hand that kind of money over to the Chinese. With that sort of capital they could develop a macro powerful enough to kill God.

Grant and AJ put their heads together to offer up one of the most evocative uses for 250 billion dollars. "Evocative" means "makes you want to throw up," right? 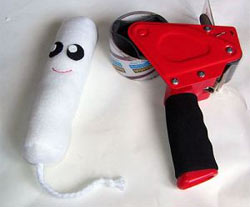 Thus, with the money we have spent on this war, we could have instead absorbed 63 Olympic Sized pools of "fluid." (A feat that man has dreamed of fulfilling for centuries)

I think the important thing to know is that we could have bought over two trillion tampons, which would come in handy in these daunting years to come.

TheRandyRhoads isn't big on grammar, but he or she is big on ideas!

Is this place your mom's bedroom? Ohhhhhhh! I totally went there!

Kris wants to enhance a large segment of the population with that 250 billion.

Roughly 150 million females. If you take out the old people, fat girls, and children, I think that would be about right. We could have stelllar, bouncing D-cups as far as the eye could see. Fuck the amber waves of grain, this is America the Beautiful.

Hey, let's clone the biggest dinosaur ever and then use some sort of totally awesome stem cell super collider type of shit to make it even bigger. Then we can use all of the money left over to make one huge breast implant and implant it onto the dinosaur. It wouldn't really be useful in any way, unless the boobasaur goes berserk and kills a bunch of people. Then it can be a cautionary tale about hubris. Or lust. Or maybe just a warning for the ages about how dangerous dinosaurs can get with a tit on them.

Mr. Barky has a proposal for that 250 billion, but I don't know if the world is ready to receive it:

Though I hate the movie I wouldn't have minded paying a million for an "Indecent Proposal" to early 90's Demi Moore. Not because she's hot, there are plenty of hot chicks willing to take 10 grand for one nights service, but because it would make Woody Harrelson livid. You try resisting that.

So basically I could get 250,000 nights at 1 mill a pop with Demi Moore* That is over 685 years of nightly Woody Harrelson frustration and anger that no amount of hemp or highly oxygenated air could quiet.

Now I'm sure nobody is willing to give me that so I think we'd have to have a lottery open to all interested Americans except Woody Harrelson and Robert Redford. That's 250,000 happy Men, Lesbians or Bisexual Women over the next half millennium.

*or something equivalent-you're gonna want that after Bruce Willis gets done with her. Thank You,
Mr. Barky

No, Thank You, Mr. Barky. Not to bring you down, but I think we'd have to conduct some sort of scientific study first just to ensure that this would actually make Harrelson angrier than the Iraq War. If it turns out the Iraq War wins then I take back everything bad I ever said about G-Dubs.

Several people were interested in the volume of a certain light-themed sex toy that 250 billion could cover. Unfortunately, one of them was a vile imposter named Zack.

Sorry, Zack, but I think the amount of stress relieved by orgasming into a flashlight with a vagina would be immediately counteracted by the burden of shame suddenly weighing down on 3 billion men. War nearly eliminated; suicide rate skyrockets.

Men weren't the only readers thinking about sexual gratification, as evidenced by unrepentant pervert "Ruth."

David Bowie is worth an estimated $800 million dollars. Even with his artistic dignity and superior intelligence, I suppose I could get him to give me a lap-dance for an hour for his net worth. Supposing it takes the first billion to get him to agree to it and then 800 million after that for each hour, I could enjoy twelve days of solid, non-stop lap dance from David Bowie with enough left over to convince Iggy Pop to finger me outside of Blockbuster Video.

Huh, David Bowie and Iggy Pop. Guess we won't be seeing Ruth cruising for dudes at any Weightwatchers clinics. Lucky for her I'm pretty sure after Iggy Pop retired on his "Lust for Life" money he just set up a tent outside a Blockbuster in Orange County. Step inside and he'll slide three in the crease, no questions asked.

Speaking of creepy celebrities, James is hoping to be the next Chloe Sevigny.

I would buy 250,000 weekends with Vincent Gallo. At $100,000 a pop it's a real deal because I would get to see Vincent Gallo every weekend for 4807.6 years. And according to his website he is both "unusually thick and large." and "You may be surprised just how much you can handle and how good it feels." So right there makes it completely worth it as well. There's nothing quite like big ole' Vincent Gallo dick all up in your face.

That probably works better as a threat. Gallo can extort the free world for 100 large every weekend so that nobody has to deal with any part of him - thick or large - in their face. 4807.6 years of peace and quiet.

Finally, what litany of wasteful expenditures would be complete without a mention of the Church of Scientology? Not this one, definitely!

Assuming that prices haven't fluctuated that much (not likely), you could get approximately one million people to OT level nine in Scientology. That's not really that many people compared to, say, your full-ride college example, or likely as enlightening. But then again, such are the prices for SUPER PSYCHIC POWERS AND THE SECRETS OF THE UNIVERSE.

I would rather throw 250 billion dollars into a volcano to trap an evil alien mastermind.

Thanks to everyone who wrote in to offer their ideas for how to best use the 250 billion dollars the government has shit down the big, swirling, exploding Iraqi toilet. For those of you who get mad whenever they see "Iraq" or also possibly "toilet", well, I still love you.