What You Should Be Watching on the WWE Network

Now that the WWE Network has launched, every pay per view show from the company's history is available to stream. That's great. It's also overwhelming. What's the difference between all these events? Which ones are worth your time?

Thirty men enter the ring. Each and every one must don a crown and take a seat in a throne. Enormous hydraulics begin to gently rumble the ring. The shaking intensifies until the entire structure is tilting side to side like a Star Trek bridge under attack. The last man sitting in his throne with a crown on his head wins this prestigious event.

Must-see moment: The 1998 Royal Rumble, in which Stone Cold Steve Austin's genteel efforts to sip from a beer can are continually stymied by the foam splashing in his face.

Six men are entombed in the Chamber of Inner Reflections. There they must face their true selves. What they see inside can only be known to them. From our place outside the granite structure, we can only hear their tortured screams and glance at one another nervously. Will any of these poor souls make it out before the 60 minute timer expires and the Chamber is sealed with holy magics?

Must-see moment: The 2014 Elimination Chamber, featuring five men that not only disappear forever, but also become unmade as if they had never lived at all. The sixth man, Dean Ambrose, casually struts out then does a breakdance move while lecherously mugging to the camera.

The world's entire reserve of fireworks is detonated. Kid Rock performs eighty songs while garbed in an American flag. A man wrestles another man to see who is the better man.

Must-see moment: Wrestlemania III, in which Andre the Giant stands in the center of the ring and eats an ice cream cone while laughing.

The titular match has so many rules that it's downright extreme. No whistling. Taking more than five steps without touching a rope is a foul. Nipples can only be used defensively. There is a ball and no one can go near it. 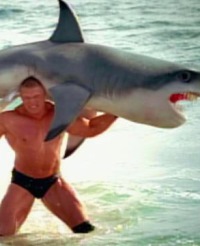 Extreme Rules 2009, where Batista was ejected for being too large and muscular.

One man attacks another in the name of retribution. Vengeance. Justice. Payback. The cycle of violence is perpetuated. We observe and contemplate our own limitations.

Must-see moment: A victorious Daniel Bryan dropping to his knees and moaning "Why do I feel so empty? What have I done?" in Payback 2013.

Money In The Bank

Suspended over the ring is a briefcase. Inside, a contract that allows the holder to challenge any title holder for their belt at any time. The catch? You can only reach the briefcase by standing on your tiptoes or slightly jumping.

Must-see moment: The 2005 Money in the Bank, featuring the only appearance of The Undertaker's "Kiss The Chef" wrestling attire.

Three thrilling hours of wrestlers cautiously wading into the ocean, then turning back around and fleeing when a wave comes their way.

Must-see moment: Rowdy Roddy Piper cutting a legendary promo on algae in the first Summerslam in 1988.

Must-see moment: The 2010 Night of Champions, in which John Cena admits to being a fan named Chad Hipley who forged a championship belt and wandered into a WWE locker room years ago to see how far he could take the bluff.

Forty men enter the ring. Only one can leave at a time. Hey, wait your turn. Try it again and I'll send you to the back of the line, buddy.

Must-see moment: Antonio Cesaro draws a portrait of a horse in the 2013 edition of Battleground. The picture is so impressive that Vince McMahon comes into the ring and holds it up for the camera while patting Cesaro on the back.

Special guest host Jeff Probst berates the WWE roster as they compete in legendary challenges from the tv series Survivor. Swim out to a bag containing puzzle pieces, solve the puzzle, throw a beanbag through a hoop, whatever.

Must-see moment: Survivor Series 2010, where CM Punk declares that he is not there to make friends.

Several tables, ladders, and chairs are placed in the ring. Each competitor must identify which objects are tables, which are ladders, and which are chairs. The referee determines who had the most correct answers. In the event of a tie, everyone goes home feeling disappointed.

Must-see moment: The 2008 TLC event, in which Chris Jericho is disqualified for putting a chair in his signature Walls of Jericho submission move.