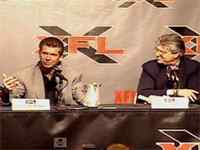 Anyway, back to the XFL! In yesterday's update, which I'd link to if it wasn't on the same damn page as this update, I made a rather convincing argument explaining how the XFL is just about the most wonderful thing in the history of mankind since "Critters 2." My argument, like many of the articles and content featured on this website, consisted solely of sweeping generalizations and poorly researched material that was the result of drinking too much Mexican beer. I see no problem in continuing that tradition with today's update.

Upon a deeper examination of the XFL's website, one cannot help but stumble upon the section labeled "The X-Zone", because it's a well-known fact that the letter "X" is just terribly hip and draws more attention than a plane crash full of clowns and nuns. Well, at least that's the effect it had back in the mid-90's, and there's no logical reasoning that would force me to think that the public has changed at all since the 1990's. Hell, we haven't really changed since the 1980's, have we? I've noticed that parachute pants and Hawaiian shirts are back in fashion, so for all I know the phrase "gag me with a spoon" could be flowing across grade schools faster than an Ipecac Slurpee through Calista Flockhart's digestive tract.

The "X-Zone" features award winning commentary from an award winning commentator, Lucas Swineford. Please note that when I write "award winning", I don't mean to imply he has actually won any awards. Instead, I feel this man has the strong potential to eventually win awards, such as "Cleanest Cellblock" or "Most Reformed Inmate." Swineford, who has obviously accepted large contributions from the XFL to write such horribly inane columns, has provided six wonderfully informative pieces of content to keep us hardcore fans happy until the XFL players have earned enough vacation days to leave Denny's and practice for a full weekend. Lucas seems very intent on spreading the good word of the XFL, and his column helps point out all the reasons we should be foaming at the mouth for the start of a new season of professional minor-league professional football.

But on a more important level, the XFL going to Memphis is great for the city because it deserves another chance at football. ItÕs a city that some feel has been given the shaft by the NFL. As evidenced by the fact that they consistently drew 25,000 - 30,000 to the Liberty Bowl for USFL and World Football League games Ð thereÕs a loyal football fan base in Memphis.

Aside from giving the XFL a much-needed presence in one of the countryÕs most important football markets, placing a team in Chicago also offers the league a solid blueprint for the future.

Vegas is a great city for two immediate reasons. First off, no one ever really provided a tremendous effort to establishing a major league football presence in Las Vegas. Sure, the city had teams in the Arena League and the Canadian Football League, but they were never given much of chance, seeing as they played for a combined three seasons between them.

Do you see a pattern here? According to Lucas Swineford, nearly EVERY CITY IN THE ENTIRE WORLD is a "perfect" choice for the XFL! If East Saint Louis were to suddenly pop up with a team of their own, Swineford would undoubtedly herald the overwhelming positives of having a team there, ranging from "great exercise potential when running from the stadium to your car, praying not to be raped" to "easy access to crack cocaine insures every game to be a visually exciting event!" Now while I have nothing but the highest respect for media whores, who have the uncanny ability to spew whatever idiotic tripe their parent company forces them to say day in and day out, I think Swineford pushes it a BIT too far. I can only assume that poor ol' Lucas has been the victim of a complete brainwashing session courtesy of Vince McMahon and goons. Take a look at the guy's face and tell me I'm wrong, I dare you:

Those vacant, soulless eyes. That wide, heartless grin. The Godawful 1960's shirt and matching hairstyle. I think it's fairly obvious that the XFL is incorporating the same technology which allowed Josef Stalin to create the army of socialist zombies that various "historic" comic books portrayed so well. Come on, try to convince me that somebody could write the following paragraph without the aid of gigantic metal machines shooting evil psychic beams into their head:

ÒOh theyÕve been doing that for a while now. But they only talk to them before or after the half. You know, I canÕt wait until they start interrupting the coaches in the middle of the game to ask things like, Why didnÕt you go for that fourth down coachÉdonÕt you have confidence in your running game?Ó

Did you see that? If you look over that quote again and pay attention to the fine details, you will discover a disturbing pattern that may shock and terrify you: HE'S TALKING IN SECRET RUSSIAN SOCIALIST ZOMBIE CODE! What else could the seemingly random sprinkling of symbols "Ò", "Õ", and "É" mean? Sure, some people could write it off as a poor text conversion from a Macintosh word processing program, but that's just ludicrous. To believe that theory, one would have to first accept the notion that the XFL isn't just the most professional company to exist since since Philip Morris or Firestone Tires. Tell me, could a nonprofessional company come up with a logo as wonderful as this?

You might claim that any grade school dropout could create a drawing like this for the "Orlando Rage" XFL team. After all, how hard is it to scribble down a picture of a red-faced Frankenstein chewing glass shards and having bolts of electricity flying into / away from his neck? Well, not that difficult, but here's the clincher: the artist knows how to use the paint bucket tool to fill areas with colors of their choice. I DARE you to try and convince me that this isn't the mark of a grizzled industry veteran.

So, in summary, I have completely forgotten why I got so initially worked up over the XFL a couple days ago. I assume it has something to do with the medication I'm currently taking, the medication I decided to suddenly stop taking, or the fact that I'm scared shitless at the prospect of Vince McMahon beating a metal chair over my head. Regardless, I now know that I can turn to Lucas Swineford to give me reasons to look forward to the start of the XFL. Undeniable, irrefutable, concrete reasons that could win over even the most non-comatose of failed experimental surgery patients.

MUST... DESTROY... CAPITALISM... AND DO THE ICKEY SHUFFLE.

You've asked for it, and you've got it: the glorious return of "Ask Jeff K.", which includes such touching moments as the following ICQ transcript:

The amount of email asking me - er Jeff K. - to bring back the column combined with the fact that he got hundreds of flame messages for his review of Command and Conquer: Red Alert 2, warranted an update to this column. Check it out!

Cranky Steve's Haunted Whorehouse, which is updated more frequently than mentions of "lubing up the mansteak" on Voodoo Extreme, has dug up and thoroughly reamed another horrible Quake 2 map. Get ready for "Gloom 1":

This is also one of the most horrendously lit maps I can remember. No thought to designing lighting effects was given; the author merely plugged them into the map editor here and there to seemingly show off how lousy he was at aligning brushes (or his complete absence of taste when selecting textures to adorn his crooked brushes). To top all of this off, I could not how to figure out how to exit the two additional maps and get back to the first to "finish" the unit (assuming that would be the point). I tried three times and the result was the same: one runs out of things to kill and then you sort of wander around until the power to your computer is unexpectedly interrupted. What fun!

If you're looking for a quality Quake 2 single player experience, you've come to the wrong site. However, if you're interested in something awful, dig right in, Jethro!

Taco the Wonder Dog, in addition to making his website 100% unreadable and eye-scorchingly painful, has updated with a Halloween Special Flash movie and something else which I can't read. I would tell you to go over there and see for yourself, but after witnessing the new color scheme, I wouldn't wish that fate upon anybody.

I have changed the left nav back to HTML, because I got sick of being lectured to by smarmy people from the "pure HTML" school of design.