Are You Ready for Some Analogieeeees!? 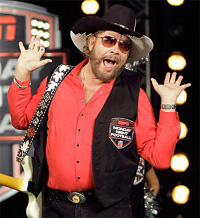 Hank Williams Jr. is literally one application of grease paint away from being a hobo clown.Hank Williams Jr.'s reworking of "All My Rowdy Friends" is perhaps the ultimate sports anthem; in fact, the only thing missing from this perfect summation of the prime-time, middle American football-watching experience is a woman crying hysterically in the background. Sadly, Williams will never get a chance to revisit to his masterwork, leaving the Gary Glitters of the world with no choice but to pick up the pieces with the help of several friendly and flexible boys from Southeast Asia. The reason? ESPN recently stripped Monday Night Football of its longtime theme, all because its creator recently decided a Fox News show made for the perfect occasion to take viewers on a tour of the nightmarishly uneducated political views rattling around his Skoal-diseased brain. They honestly should have expected as much from someone who consciously chooses to dress up as the police sketch of a rapist.

If you're wondering what Hank Williams Jr. said to win the hearts and minds of hayseed morons countrywide, it's actually far less offensive than you'd think. On the subject of John Boehner and Barack Obama putting aside their differences to play a friendly game of golf as the country continued to rot around them, Williams had this to say: "Come on! It'd be like Hitler playing golf with Netanyahu." Delivered with the boastful swagger of a man who just ate a meal served with two kinds of ketchup, this line was undoubtedly pre-planned and written out phonetically on the inside of Hank's colossal post-cataract surgery sunglasses. Given the confidence Williams packed into this quip, it's unlikely that he's ever set foot on the Internet, where the logical conclusion to any argument is one side's gradual and unavoidable transformation into Adolf Q. Hitler.

Of course, we don't need to go into the logistics of comparing Hitler to a shitty, milquetoast Democrat who, in the words of Bart Simpson, folds like Superman on laundry day. Liberals hate Obama for being the same war criminal/corporate shill in the tradition of every American President, so we can only stop and wonder how many n-words would echo though our abandoned main streets and business centers if Obama did anything remotely leftist. So really, why the anger? Hank Williams Jr., you are a millionaire for being able to control your chili burps and chaw intake long enough to sing the names of two teams once a week during football season. Only in America could a cretin who looks like he crawled out of some Hills Have Eyes sequel cash in on the good name of his father to build an empire that celebrates the life of being a sour, bloated barbecue fart. At least Hank Sr. had the good sense to OD in the 50s and escape witnessing his son mutate into some kind of terrible pigman. 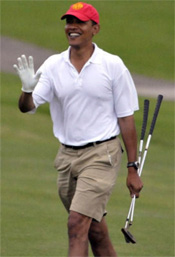 Put the pieces together, people!There's a genuine sense of pro-Hank outrage exploding in Internet comment sections, which usually happens when someone says something incredibly stupid publicly and is forced to take responsibility. And this isn't the first time controversy has struck the dull, foamy domestic beer atmosphere of Monday Night Football; color commentator Rush Limbaugh made the mistake of saying something racist outside of his normal audience of guys in puffy hats hopped up on trucker speed and manifesto-writing gun nuts, and quickly returned to the safety of his studio where he could mock people with debilitating neurological diseases in peace. Dennis Miller's stint on the show didn't end in controversy, but rather ABC's realization that they would never draw in the coveted audience of smart people who are also gigantic, intolerable assholes (this is also why they canceled Sports Night). If Monday Night Football continues its current trajectory, the show will eventually be taken off the air in 2015 when Ron Jaworski rolls up his sleeve on-air to reveal his new tattoo of Bugs Bunny in blackface.

So, in the post-being ready for football world, what are we to do? How can we possibly sit motionless for three hours without a disgusting bearded man first questioning our football preparedness? Are we to tug on our one fastened overall strap in agony, wailing "usetuh be a man could speak his mind," all the while wondering when our local representative will seriously entertain our pleas for a White History Month? Our children may not live in a world where the untalented children of actual musicians continually cash a check for some dumbass song they wrote 30 years ago, but evidence will forever exist in our culture proving that Hank Williams Jr. is a belligerent turd who takes the utmost pride in his astounding shitheadedness. And while "All My Rowdy Friends Are Here on Monday Night" may be lost to the ages, we at least have this: