Folks, I'm excited. I'm really, really, really excited. I haven't been this pumped up since I found a six pack of slightly used Crystal Pepsi in the abandoned meat packing plant down the street. What on Earth could cause me to become so energetic and positive, short of a sequel to Mr. Do's Wild Ride? Let me clue you in:

LESS THAN NINETY DAYS UNTIL THE START OF THE XFL SEASON!

Now many of you out there are probably wondering what the XFL is and why I'm getting so remarkably orgasmic over it. Well to answer the second part, I get remarkably orgasmic for about any reason, from the christening of a Jiffy Lube to the announcement of a new chicken sandwich at Arby's, so that isn't really a feat in itself. However, many people haven't heard of the glorious XFL and the equally glorious legacy behind it. Let me cut and scrape a few sentences describing a bit about the XFL (remarkably enough, XFL.com doesn't have any information regarding this; I had to go to another site to find it):

The XFL is a new professional football league operated by Vince McMahon, the owner of the World Wrestling Federation. It is a separate entity entirely from the WWF, though the XFL will be promoted on WWF events shown on television. 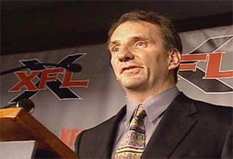 Did you get that? It's FOOTBALL (American Football, not the wussy football that involves kicking a white sphere and rioting) combined with PRO WRESTLING. These are two events which were just made for each other. Just look at the similarities:

Both feature fat people who's goal is to ultimately lay on top of other fat people.

Both have referees who couldn't call an honest game if their childrens' lives depended on it.

Both require massive amounts of alcohol to be entertaining.

Both have fans who think the appropriate attire for attending a formal event can be summed up as "wearing pants."

They belong together like peanut butter and chocolate! Windows and fatal bugs! Gamespy and unpaid employees! Cousin Larry and Balki Bartokomus! It was just meant to be! If you had any doubts, just think about this startling and revealing fact: Vince McMahon was given the WWF by his father. With such a strong background, it's highly unlikely there's anybody else more qualified to run a professional football league. Plus McMahon's got a dent in his chin the size of a golf divot, so you know he really means business.

Every single aspect of the XFL screams "high class." Upon immediately visiting the site, the viewer is treated to a random display of "Crowd Noise" on the right. This shows a few sentences supposedly quoted from an excited XFL "fan" whom I assume was given 100 bucks, a bag of cocaine, a piece of paper listing all the team names and some adjectives, and a tape recorder to save their comments. If you weren't pumped up before, reading some of these gems will surely put you in the mood!

"I predict the Maniax will be the league champs. With the best coaches and players, it is a sure thing." - Shuan N.
"I have only one thing to say about Birmingham - THEY SUCK! Maniax will dominate!" - Chris J.
"It doesn't matter who coaches the Enforcers, we're still gonna be the best team in the league." - Kevin F.

Wow, the XFL fans are sure pumped up and excited, especially considering they haven't even seen a single team practice yet! That's how RAW AND IN YOUR FACE THE XFL IS GONNA BE! They talk shit without even knowing for sure who's even on their team! It's this kind of mindless dedication that leads a team to victory. It's also this kind of mindless dedication which powered the Nazi War Machine, but I think I can safely say that the Nazi reign of terror was nothing like the XFL. For example, Hitler's uniforms looked exponentially less stupid than the XFL's. 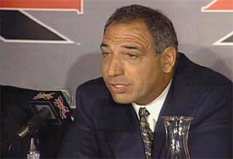 I guess the uniforms are supposed to match the teams' names and attitude, but some of these are just downright laughable. The "San Francisco Demons"? The only thing demonic about San Francisco is the cost of apartment rent there. The "Orlando Rage"? How about the rage people express when somebody from Orlando cuts in front of them on the highway and slows down to approximately nine miles an hour? "Los Angeles Xtreme"? Nothing says "failed marketing campaign" quite like the word "extreme", much less it's forcibly-hip brother "xtreme." I can just imagine the EXCITEMENT and RAW ENERGY that was flowing around when their creative team was brainstorming names:

The XFL.com page also lists the results of the XFL P.A.S.S., which was the draft for people untalented enough to end up in working for the NFL or popular theme parks. The headline just teases you to read it by promising answers to the question, "what ever happened to Scott Milanovich, Pat Barnes, Casey Weldon, and Marcus Nash?" Unfortunately, it doesn't answer who the hell Scott Milanovich, Pat Barnes, Casey Weldon, and Marcus Nash are to begin with, but I can only assume they're some of the most talented individuals to ever earn a management position at Sears. You know how when you were a kid and had to choose teams for kickball, there would always be a couple scrubs that nobody wanted? I imagine that's what the entire XFL P.A.S.S. was like. The challenge wasn't finding somebody that was GOOD, the real trick was drafting somebody who was LESS AWFUL than everybody else. Kind of like somebody walking up to you and offering to give you either Malaria or Legionnaires Disease.

Regardless, I'm really looking forward to the XFL. In tomorrow's news update I'll explain more reasons why, unless I manage to forget them or lose interest in the subject altogether.

Oh, the joy I feel in my bones when I receive a letter from Cliff Yablonski. It's no XFL invite, but it sure is a wonderful experience nonetheless.

From: cliff yablonski
Subject: your site

hey cretin, I updated my site with three new pages of people I hate. in case you're too stupid to see the pattern, Im updating every monday. count on it, schmuck.

Wow, you know what that means! Cliff Yablonski hates three more pages of us!

Muster up your courage and dig into the seven or so classes, if you can manage to work through a couple of class and team selection menus (which, because of some rather lazily implementation, must be taken in the correct order OR YOU DIE). The general class-based bullshit awaits: a scout Arctic Marine, spy Assassin, heavy weapons guy Heavy Marine are all in store, as well as many other highly original classes! There is even a class that has a high powered rifle that can telescopically zoom! The incessant pounding of wacky new ideas is making me feel very dizzy!

Incredible! Read it and weep!

I have changed the left nav bar to Flash, mainly because it looks a hell of a lot nicer and it's also a smaller file size. If the bar isn't showing up for you, then you obviously don't have Flash installed and should probably get it. The general population does have the Flash plugin, so I think it's a safe bet that too many people won't be left out in the dark. Before you write into me, saying you're running L33T WEB BROWSER 5.21938 on your BLACKHEAD LUNIX v4.231289237 BETA ALPHA OMEGA OS, let me express that this site is made for IE and Netscape users. I don't have the time, manpower, or knowledge to code it to be compatible with every obscure browser and OS in existence. Flash is a pretty standard plugin, so there shouldn't be any major issues with it. If you do find any, drop me a line.

Thanks to everybody who emailed me, offering their condolences to me regarding my breakup with my girlfriend. Sometimes things in life just don't work out the way you thought they would. It ain't no thang though; when life throws me a curveball, I... uh... um... make lemonade. I forgot how that saying goes, but I think you get my point. I heard a rumor that there are plenty of women in California, so it shouldn't be a critical problem.