Everybody have a great Saturday, and remember what George Bush Jr. says: 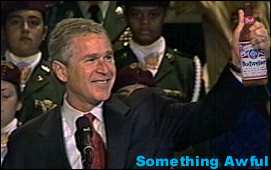 "Don't do anything I wouldn't do!"

Since updating the fantastical E/N Update on the weekends involves me actually having to go to E/N sites (something which is dangerous in itself), I'm just going to provide a couple links which basically sum it up for me.

Something that's starting to bother me recently is a big trend in the "e/n" scene. There are a lot of people writing sites that actually think you give a shit about them. They write their little updates about their boring fucking lives and they are blind enough to think you give a damn.

I don't mean to pick on this poor girl, but on her cam picture she writes, "i still have a bio lab to do. ugh."

Do you care what she has to do? Of course not. I don't care.

All these people are telling the story of their dramatic little life... like the whole universe revolves around them. The majority of sites that I've found like this are run by teenybopper girls, but they aren't the only ones. It's gotten to the point that I'm disgusted with that whole area of the Internet. Yes, I realize some of you think I'm doing the exact same thing, but the difference is I know you don't give a shit.

What's that? The sound of a nail being hit on the head?

The first thing you need to know is being a webmaster of an E/N site puts you in a new catagory of people, no longer are you that loser that sits in #thestileproject and never speaks, NO!, you are now the op in a channel of your very own!!! But before we get to that point you have to build your site...

Now the first thing you are going to have to do is come up with some kind of domain name that will keep your fans coming back... try using words like "stupid", "turd", or "idiots".

The human race is full of people I hate and want dead! My life is a hollow shell of lies! I still have a bio lab to do! Ugh!

Seriously though, I don't know why E/N site have suddenly become glorified bloggers. The "content" is nothing more than "I saw my friend at the grocery store" and "why is everybody but me so stupid?" and "I am watching this show on TV." They don't even try to disguise it as content. People may consider this site to be E/N material, but I put up at least two pieces of content every weekday, something most E/N sites don't. I try not to go into detail regarding my personal life, except when it can result in a semi-interesting or humorous story, either real or fictional. For example, have I ever mentioned on this site that my girlfriend and I broke up? Nope, because it's not very funny or interesting. Of course these are their own personal websites, so they should feel free to do whatever they like, but I just don't understand the growing trend of updating your webpage every ninety seconds with the name of your favorite cereal or your current grade in algebra class. Maybe it's just me.