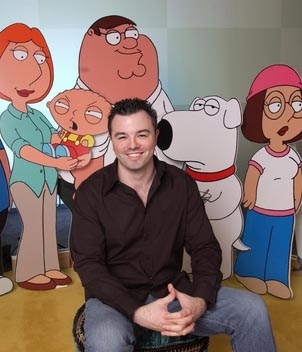 You've seen their images on beach towels, flavored party soaps, genetically altered tomatoes, and yes, even television screens. Do the names Peter Griffin, Lois Griffin, Brian Griffin, Ajax Griffin, Stevie Griffin and Lisa Griffin ring a bell? Not only is Seth MacFarlane the creator of the dysfunctional Griffin Family, but he also voices each one of them, along with all of the other crazy characters on the FOX cartoon, Family Guy. And you know what? With Seth's enormous talent, he wouldn't have it any other way. Singer, actor, writer, director, cartoonist; this quintuple threat may just take over the world with his unique version of humor- if we're lucky enough!

Somethingawful.com celebrity reporter Bob "BobServo" Mackey caught up with Seth MacFarlane on the promotional tour for Family Guy Season 4, Volume 3 on DVD. After sitting down to watch all four episodes on the DVD box set, Bob was ready to get under the skin of who Time Magazine called "The Funniest Man Ever in the History of Creation, 2005."

October 23rd, 1973 was just an ordinary day for Ron and Perry "Stillbirth" MacFarlane. Ordinary, that is, except for the 72 hours of paralyzing labor Perry did not usually experience on a daily basis. Little did the MacFarlanes know, the birth of their son Seth would change the face of television comedy forever. But Seth wasn't always funny enough to come up with those classic Family Guy catchphrases that are repeated on college campuses and Family Guy Fun Fests that have been popping up at restored movie houses nationwide. For Seth MacFarlane, Stevie's famous "I shall triumph over the mother figure!" and "Are you pondering what I'm pondering?" would have to wait, as these examples of timeless humor would not be created until Seth recovered from the catatonic state in which he spent the first seven years of his life. A touching subject for Seth, I spoke with his father about it over the phone.

"Me and Perry were worried that our little boy was never going to talk. It was like he was waiting for something," Ron said. Seth spent these years of his life propped up in the corner of a small one-bedroom Rhode Island apartment, with the only apparent sign of life being his seemingly non-stop defecation. But even with this natural bodily function, some of that classic MacFarlane wit still shone through.

"That's all he'd do, all day, every day. Each time he shit, he would laugh and laugh like it was the first time he did it. It was the craziest damn thing we ever saw." When asked about any further breaks in Seth's childhood state, Ron recalled, "Whenever the in-laws came over, we'd eventually run out of things to talk about. After three minutes of silence had passed, Seth would just erupt with laughter like it was it was the funniest goddamned thing in the free world. And no matter how much I clobbered him, he wouldn't shut the hell up."

"What? It's not like he was going to get any dumber."

But on December 31st, 1979, something happened to Seth that would eventually change the very perception of comedy for all of humankind. Ron MacFarlane explains: "I had just gotten off my second coal mining shift, and as always I threw my bag of tools right at my son's head, while screaming, 'You worthless piece of human waste, do you realize what you cost this family?!'" But there's more to the story than the twisted sense of MacFarlane humor that America has grown to love. "Before my pickaxe could strike my son in the skull, Seth ran to the TV screen, as if drawn there by powerful magnets. While that ball was dropping in New York City, my boy's eyes grew wider and wider."

With the traditional shouting of "Happy New Year!" on that cold 1980 morning, Seth, raising clenched fists triumphantly, broke out of his catatonic stupor. "It was like his life really began that day," Ron said.

And 19 years later, he would reinvent comedy.