You are God's Beautiful Butterfly 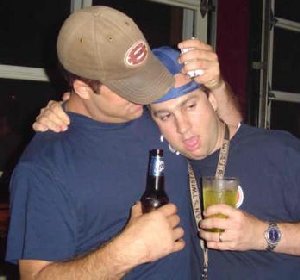 Hi, how are you doing today? Not so good? I'm sorry to hear that, but its alright, that's what I'm here for. You know, I've helped a lot of people over the years with their self-esteem, and by far the Internet crowd has the most issues concerning their sense of worth. Weight problems, insecurities, and depression plague these poor souls to the point of madness and despair. The fact that they are even on the Internet in the first place tells me that they would rather communicate with people behind a facade of fake names and animated icons rather than place themselves in social situations with fellow humans. How do I know all of this, and what makes me qualified as a consoler in these matters? I too have been afflicted with the crippling disease of low self-esteem. I was once like you.

Since I was a young lad, I have never had a good feeling about my lanky body or myself in general. I would shy away from people and immerse myself into a fantasy land of whimsy and magic, and then get thrown into a duck pond by some big bullies. When I grew older this lack of self-esteem grew like a festering sore that had become gangrenous over time. I ate Skittles and Spree to excess, stayed up to all hours of the night watching reruns of the Gong Show, and even started wearing my sunglasses at night, so I could, so I could see. My parents found it impossible to communicate with me and I donned my room with black lights, Danzig posters, and a quilt I stitched by hand that said, "I love Satan". When I finally found the pain unbearable, I tried to take my own life in various ways, but failed miserably every single time. The first time I jumped into a hot tub and turned the water temperature as high as it would go, trying to boil myself like a lobster. I even put a plate of butter and lemon juice next to my suicide note as a commentary on how this existence is so corrupt. After a few hours I just became really dehydrated and my skin was super wrinkled. Another time I tried to hang myself from a hot air balloon but the flimsy knot came undone and I fell into a swamp and befriended an alligator. I even tried swallowing a bunch of tacks and laxatives, but it only resulted in making the most dangerous bowl movement the world has even seen. I was a failure at being a failure.

That all changed after my 17th failed suicide when somebody actually stepped in and asked if I was ok. I told them that I was not ok and that I needed help or at least somebody to read my poems and understand my pain. Once I had somebody listening to all of my problems and I could vent all my anger and frustration out in an artistic orgy of creativity, I felt a whole lot better about myself and my life. I realized that I was the Lord's gentle snowflake and that although I have some major faults, I also have something to offer the world. After my rebirth into the fold of humanity, I made it my life's goal to help people who are feeling depressed and are in the same plight I was once in. Perhaps if I think I can save enough people, that maybe, just maybe, there is hope for me. I will be fielding letters sent to me from people on the Internet who desperately need my expert help. Are you ready to heal Internet?

Dear Frolixo,
I'm really unhappy with my self-image. I have fat ankles and whenever I try to run I trip over my fat and people laugh at me. This makes me even more unhappy and I keep eating Little Debbie snack cakes, making me ankles even fatter, and I fall down the stairs all the time. I eat because I feel bad, and I feel bad because I eat. Is there any way I can stop this cycle of destruction before they have to use a crane to knock down my walls so I can go on the Maury Povich show? Also I think there is a ghost in my basement because I heard noises down there and it smells like Cheetos. Thanks.
-Chubby in Charleston

First of all Chubby, you need to realize that no matter how fat you think you are, you are a very special person and you should not get angry with yourself. You don’t have fat ankles because you eat too much, you have fat ankles because the ghost in your basement is haunting your soul, therefore slowing down your metabolism to such a rate that you gain weight faster than you can burn it. In fact, 80% of overweight and obese people are really just possessed by spirts from another dimension. The only way you can start feeling good about yourself again is to burn some sage in the basement and then call out the spirit to leave the household and your ankles. You might have to wrestle the spirit or call in a specialist if it refuses to leave your bloated body. I myself am infested by a variety of spirits and I’m working on getting rid of them so I can get a handle on my beer gut. They also make me murder prostitutes but that’s another issue entirely.

Dear Frolixo,
I’m really lonely and having trouble finding a girl who will love me for who I am and not just say they love me and steal my wallet and silverware while I’m in the bathroom. I don’t understand women and I always seem to mess everything up. I know I’m not the most handsome or dashing guy in the world, but I’m really nice and try my hardest when it comes to impressing a potential mating partner. I just want to find a girl who I can have sex with in real life and then play World of Warcraft with me so we can run around as Night Elves killing spiders and going on magical adventures. Is there somebody out there for me?
-Blue Balls in Boston

Well Blue Balls, you have a classic case of CNS, or “chronic nerd syndrom”. As a child you were dunked in barrels of water filled with electric eels and this warped your view on the classic male/female gender roles in a relationship, causing you to put your own expectations on other people, and as such you will never find the right woman for you. Woman hate guys who act nice and who are really eager to be intimate with them, so you need to act more like a jerk and play it cool instead of humping her leg on the first date. When she asks you to call her, let her wait a few days instead of leaving her 20 messages and crying on the last one because you think she hates you. Also you are gay.