I interviewed Andrew W.K. back in 2002, and it was one of the most entertaining and inspiring conversations I've ever had with a musician. I remember him being a genuine person who really took the time to answer everything he was asked in a thoughtful and insightful manner. I could say exactly the same for the gentleman to whom I spoke this week, but according to a persistent, recently resurgent theory, he might have been a completely different Andrew W.K.

All nonsense, of course. Based largely on misconstrued passages from a lecture he gave to a London audience in September 2008 (sensationalized e-mail forwards and a Wikipedia entry claim this happened in "December 2009"), rumormongers allege that a succession of actors have inhabited the Andrew W.K. persona, like buccaneers becoming the Dread Pirate Roberts. Forums user Stink Dinner offered a jocular theory about the alleged chicanery: "It's not possible for one man to party so much, it's a team of partiers making merry in shifts." I offered Andrew W.K. the opportunity to confront this claim, as well as letting him address other NMD-chosen topics at great, great length. 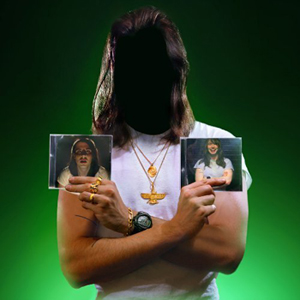 SA: In the past week, you've responded to the rumors about your identity with a written statement and a video. However, the one allegation I'm still getting e-mails about -- that some confused, even betrayed-feeling fans claim you haven't addressed -- is that there have been several Andrew W.K.s over the years, played by actors. To start, I wanted to give you a chance to put people's minds at ease about that, to offer them closure one way or the other.

WK: I've tried to answer those questions so many different ways over the years, first with basic answers that I figured would clear things up right away, but they haven't. Sometimes I wonder if maybe a lot of these people who have the same questions haven't seen my answers in the past, which is understandable, so to them it's a very new situation.

I don't feel tired out by the question, because people clearly still have been wondering about it, and it's my responsibility in that regard to assure people that I am who I am. It just feels odd to me, though, to have it still be in question, because I don't see who else, really, I could be. I don't see how it's possible for anyone else to be me, so it becomes a very personally confusing and, at times, emotionally distressing situation. In general, it's very hard for me to comment except to say that I am Andrew W.K.

The nature of what I've done with my performances and how I've presented myself has made it pretty straightforward regarding what this music is about, and what I'm about, and that's why it's been so surprising and interesting that, even when I've done as much as I could to make it clear, there could still be those sorts of very basic questions. These aren't detailed questions. These seem to be questions about the very fundamental nature of this thing, this person, me, Andrew W.K. The most basic question is "Does it exist or not?" and for that to be in question has been really shocking.

SA: On a lighter note, what are your thoughts about capes?

WK: When it gets cold, it's great to have long, flowing pieces of fabric about your body. Now, a simple overcoat can certainly do a great deal. It's going to go down at least to your knees if not past your knees, it's going to button up in front, it's going to close, but why not have that extra layer that you can get out of the cape? It's an elegant blanket! Capes oftentimes have hoods or oversized collars that add another layer of warmth about your neck and your shoulders. You can push them over your shoulders so they completely flow down your back, or you can pull the cape around your shoulders in front and essentially have it wrapped entirely around you.

Now, I would advise you to still have a coat and not just wear a cape, but that's completely open to debate. It depends on if you're a person who would wear a cape without a coat, maybe just wearing a T-shirt with a cape over it. In that way, you have more mobility, because your arms aren't trapped in sleeves. It's like having a coat you can instantly sling over your shoulder, or a coat that almost doubles as a backpack, though you can't necessarily carry anything in a cape, unless it has a hood. 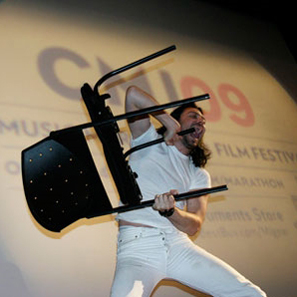 SA: One of our forums members wrote "If I ever feel sad or blue, lonely or depressed, I just throw on Andrew W.K. and I'm instantly transported to a better place." What do you do when you feel down?

WK: First of all, that's a great thing to hear, and that's really what I want this to be about. When people are able to focus on the feelings of joy and excitement and possibility, and they realize we do have the ability to feel however we want, and that music can be a tool to get to those different feelings, that makes me feel really good and hopeful that the focus can remain on those feelings.

For me, personally, what's helped the most when dealing with any situation that's been painful or stressful or depressing, is first of all to allow myself to feel that way, and to not try to actually make myself feel worse by feeling guilty about whatever emotion I was experiencing, and then to see how I can spin that and turn it into a good feeling. Sometimes just letting it go and allowing the emotion to move through you, that can be a therapeutic answer.

I think taking responsibility for my own feelings has been the most helpful in changing them, because if I figure that if I'm the one making myself feel whatever way I've been feeling, then I can also be the one to change that. When I've blamed it on situations or circumstances or other people, then it's been a little harder to feel like I could change it, because I felt like someone else had that power over me. But ultimately I want to feel like I have all the power - not necessarily always being in control, but at least being aware enough of myself that I can navigate through existence.