You Might Be Enjoying a Horrible Joke Email Forward If... 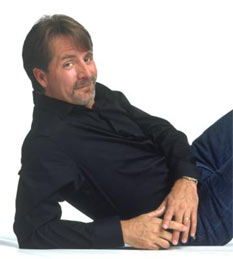 America's face of mediocrity.Let's go ahead and make a bold statement of fact here: Jeff Foxworthy is an abomination. He's the kind of karmic mishap that comes into existence when my country makes "America's Funniest Home Videos" popular enough to merit a spin-off show. Jeff Foxworthy is punishment sent down by a wrathful god to inflict suffering on those of us who would never even consider using the term "funny bone" in relation to anything besides an arm injury.

Two hideous occurrences have prevented me from burying my memories of Jeff Foxworthy somewhere next to my recollections of the TV Show "Automan" and my mental time capsule containing the Transformers Nintendo game. The first of these things is the recent Comedy Central scheduling abortion of "Blue Collar Comedy Tour" featuring Foxworthy among others. I guess working stiffs like their comedians to be aggressively stupid and insultingly formulaic. Personally, I think Comedy Central might as well have filled a lineup for a night with this, "Crank Yankers", and a frame capture from a Margaret Cho routine accompanied by 90 minutes of shrieking.

Worse though is the persistent trend of email forwards consisting of "You Might Be a Redneck…" derivative slop in which the word "Redneck" is replaced with everything from "Anime Fan" to "Furry" to "Democrat". These hilarious lists are one of the many reasons why I fantasize about murdering Al Gore while I lay in bed at night. They are never funny, although they might briefly amuse the sort of person who gets confused while trying to microwave a Hot Pocket, yet they arrive in people's emails daily. For those of us with motor functions and reasoning skills superior to a hobbled veal calf we have the sense to immediately delete these monstrosities without reading them.

Which brings me to a sad fact; someone is not doing this. Someone out there is forwarding these emails to us. Your senile grandparents, a mouth-breathing coworker that needs to be chemically castrated, or good friend who just needs a sound beating, it doesn't matter. They continue to spread virus-like through the inbox's of the stupid.

Here at Something Awful we're always anxious to hitch our chuck wagon to the most repulsive meme possible, which is why I have devised my new email forward list "You Might Be Enjoying a Horrible Joke E-mail Forward If…". This stunningly conceived and endlessly hilarious list is guaranteed to tickle your funny bone and make your sides hurt from laughing!

You Might Be Enjoying a Horrible Joke E-mail Forward If...

No comment other than to say I can't believe this piece of artwork exists....you have brain-afflicting chromosomal damage from eating pieces of radioactive waste you found inside of a hog's skeleton in your front yard.

...you have a psychological condition that makes you like whatever a normal person would hate.

...there is a bomb tied to your chest that will detonate if you laugh.

...your favorite food is secreted by your own body.

...you are a semi-sentient swarm of microorganisms that draws sustenance from light and you are currently nesting on the surface of a computer monitor.

...flashing lights and shiny or metallic objects are, in your opinion, the greatest achievements of mankind.

...you are so fucking high right now that you are tasting this e-mail forward.

...you aren't even really reading it; you're just staring at your e-mail client and fondly reminiscing about that hobo you stabbed to death.

...you enjoy everything because it's what Jesus would do.

...you are really looking forward to the blockbuster motion picture "Torque".

...you just stopped by your cubicle to check your e-mail one last time before the police arrive and arrest you for shooting nine of your coworkers.

...you are still suffering from the confusion of shellshock following an artillery barrage that landed near your foxhole.

...you've been diagnosed with terminal cancer and you want each moment left of your life to last as excruciatingly long as possible.

...the sound of the furnace kicking on at night has you convinced that your house is haunted.

...everything is seen through rose-tinted lenses thanks to that back alley abortion your hugely pregnant girlfriend finally agreed to.

...your last name is Foxworthy and your first name is either "Jeff" or "The guy who just strangulated Jeff".

...the alternative is ritualized torture at the hands of a Uruguayan witch-doctor.

...you complain that widescreen movies have those "funny black bars" on them.

...medication-related priapism just earned you a promotion at "The Bear's Den All Male Revue".

I encourage all of our readers to forward this to every single person they know. To help keep things moving after that I have composed a little introduction that will hopefully coerce the people in your address book to continue the chain.

This is a wish email. If you find it funny then pass it along and your wish will come true. If you don't find it funny then the wish e-mail will no longer protect you from the hardships of a hateful world. This wish email will turn its back on you if you turn your back on it, leaving you to wallow in the sea of futility and unhappiness that threatens to envelop us all. This wish email will step a boot upon your screaming face and push you down beneath the waves to drown, choke, and succumb to the ceaseless smothering cruelty always threatening to steal into our lungs and extinguish the dim light that each of us represents in this vast tapestry of unending black.

John Conroy forwarded this e-mail to 19 people and the very next day he found 19 gold bars on his front lawn and he used these gold bars to buy a golden hat! Megan Boulder forwarded this email to 302 people and that afternoon she was supposed to board a plane but she took so long adding people to the CC field in Outlook she missed the plane and it was the plane that crashed into the World Trade Center! Golmoy O'Zenttroc did not send this email to anyone and he boarded a plane that crashed into the World Trade Center!!!!!!

The choice is yours!

Don't be the guy who doesn't send this important e-mail forward to everyone in your address book and then suffers the consequences. Be a winner!

Hey there folks, Taylor "Psygnosis" Bell here with an all-new rom review! Do you like stupid enemies? Do you like slow walking? Do you like cheetos? Then take a gander at Chester Cheetah - Too Cool to Fool!

Even though Chester complains about being held against his will in a zoo, for some reason you start the first level out relaxing on a bench in the park. The game begins after you watch some guy named Mean Eugene running away with a motorcycle on his back. Apparently this motorcycle belonged to Chester Cheetah, since the entire game is a quest to find the motorcycle, piece by piece, and reassemble it. I thought it was pretty strange that a cheetah would use a motorcycle instead of just running everywhere, but upon starting the game I discovered that Chester Cheetah is the slowest fucking cheetah in the universe. This throws his whole advertising career into question – how do we know his allegedly fast movements in his commercials weren’t done with special effects, or with prerecorded movements of a completely different cheetah? This doesn’t really have anything to do with the game, I just thought it was interesting playing a sidescroller starring the Milli Vanilli of the snack food industry.

Check that shit out!