Warped Tour Report (for the year of your choice)

The Warped Tour began in the mid-90s when tolerance put on a riot grrl t-shirt and started getting all up in our faces with snappy zingers about mean people and the suckiness thereof. Everything I learned about pop punk and how it's 100% more bearable live can be summed up with the following analogy: New Found Glory = autism, crowds at Warped Tour = Temple Grandin's "Hug Box" for autism therapy. When you're trapped in a giant mass of sweaty white people that could implode around you at any second, you don't even bother noticing how asstastic the music is.

I had brought my laptop on which I had installed Tekwar's virtual William Shatner simulation. A multitalented jack-of-all-trades, Shatner was going to serve as my guide through this mysterious land of studded belts and hair gel. The closest thing I have to an artistic talent is my ability to find drama and sadness in the act of wasting food, which means that on a scale of zero to William Shatner, I'm only qualified to write the script for an educational film about the yet-to-be-diagnosed Recurring Short-Term Empathy Transference Disorder (possible tagline: How do you break off your emotional connection with something that's already dead?)

I was dressed in the height of punk fashion: a Steve Urkel t-shirt on which I had written the words "FUCKED ME" in magic marker. For some reason this didn't seem to impress the girl standing next to me in line, so I tried making some vague comments about how I hated authority figures. "I can't believe security took away my alcohol." I said. "Fuck them for not recognizing my right to pour out a 40 for Biggie and Tupac."

"Is that a pink rubber spiked bracelet you're wearing?" the girl asked.

"It's a motivational tool. Each spike signifies one month since I quit my crippling addiction to Japanese horse racing games."

The awkward silence that followed was fairly typical of the mixture of pity and disgust I inspire in members of the opposite sex.

"It's funny," I would later tell Tekwar's virtual William Shatner simulation "I find myself truly attracted to punk rock girls, yet I often feel like it's below me to even talk to them. Do you think I have a superiority complex?"

"That's a tough question." William Shatner said. "I think first you need to ask yourself if you aren't just afraid of connecting with people."

"That's a real possibility, but at the same time, some of the fear you speak of is justified. There are some people I genuinely don't get along with. Dragonball Z fans, for example, or extroverts; people who overstimulate me with meaningless small talk and whatever other mental refuse they can spray out their vacuous word holes. Also, what if every time I meet someone it creates an alternate reality where I'm trapped inside that person's subjective perception of me? And what if scientists create a dimensional portal to that reality but something goes wrong and the whole world gets sucked into a horrible nightmare vortex?"

For some reason I thought eating and then moshing would be good idea. After 15 minutes in the mosh pit my stomach began trying to turn itself inside out, expelling food through every pore and orifice of my body in the process. And since the food at the Warped Tour is so expensive, I was losing about $10 each time I puked.

I always thought it would take years for my youthful punk-rocking ways to give way to a middle-aged need for security, but puking my guts out over a trash barrel accelerated it to about 5 minutes. I became very dissociative and kept telling William Shatner I wanted to go home. That would've been the end of my Warped Tour adventure had the Circle Jerks not come on stage.

It's a well known fact that adding a rap part to the middle of any punk song makes it 100% better.

Keith Morris, lead singer of the Circle Jerks, you rock my world. The rocking begins very slowly and gently but gradually gets more and more badass like a fat cosplayer powering up his super move. I am currently writing an epic poem dedicated to how awesome you are. The poem will be presented in Hyperstudio as I feel that the sound effects and clip art really accentuate the emotion and intensity of the piece.

"I just thought of a fun-filled way we can get to know each other better." William Shatner said. "Draw three pictures representing changes you'd like to make in yourself and I'll try and guess what they are."

"No way." I said. "The last thing I need in my life is more trite symbolism. This morning during my daily pep talk to get myself to leave the house, I caught myself referencing the fucking Matrix as a metaphor for looking beyond my negative perceptions of the outside world. It's too early to say what kind of demoralizing effect this will have on my new resolve to be my own cheerleader, but one thing's for sure; it's a new low."

Before I left, I wanted a souvenir to remember the Warped Tour by. I eventually settled on this "Skateboarding is not a Crime" t-shirt. It reminds us that this country was built on freedom. Freedom to do awesome skateboard tricks whenever and wherever we want! Those cops will think twice the next time they try to arrest me for having an attitude too outrageous for this planet.

"Hey, Virtual William Shatner, I just had an incredibly uplifting thought. Even if the future does turn out to be a technological dystopia like in your Tekwar novels, there will still be rainbows. And as long as there are rainbows, bands like Good Charlotte will always have inspiration for writing life-affirming songs about individuality."

"What if in the future we blow up the sun like in The Matrix?" William Shatner said. 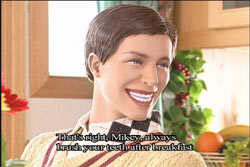 Go and read this way radical special feature before the sands of the hour glass run out!