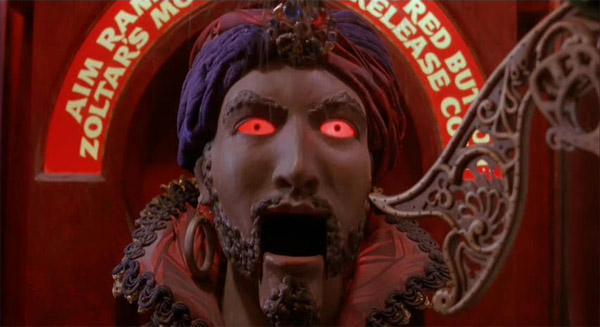 We at Laughton Amusements and Hog Leather regret to inform you that, due to a grievous manufacturing error, our Zoltar Speaks Model 1927-A Novelty Booth has been reported to affect users in ways not originally intended by its creator. While the purchase of a carnival ticket waived your right to sue in the event of physical or spiritual harm -- an agreement understood by all attendees -- we sympathize with you and the very few other children who have unfortunately been "bigged." Waking up at the command of an adult body brings with it a responsibility greater than even babyproofing, and we would like to do our best to help you adjust to your new condition in the most efficient way the following 600 words will allow.

Q. Should I attempt to contact my friends and family?

A. Most likely, you have thought about reaching out to loved ones and informing them of your new condition with a plan that involves disclosing information only the both of you would know. Unfortunately, this age of social media means nothing is too unimportant to share, so the inside jokes and references you trade with close friends have been tweeted hundreds of times, and poorly.

Note: the people who actually believe you will no doubt be dangerously unmedicated, an issue completely unrelated to the business practices of Laughton Amusements and Hog Leather.

Q. What will I do for money?

A. After being chased from your own home by a mother in hysterics about the loss of her child and the subsequent presence of an unknown and strangely comfortable adult in their bed, stabbing hunger pains may eventually have you wondering where the next meal will be coming from. Unfortunately, without a social security number, you'll be "off the grid" and must resort to work given to other invisibles like yourself. Some may find it ironic when they hear themselves wishing for their young, pliable bodies back after the third consecutive 14-hour day hunched over on a strawberry farm. We ask that you not correct these people on their misuse of the word "ironic," since the debilitating back spasms they suffer from may make them unreceptive to these concerns.

Q. Surely I could reconnect with my best pal!

A. We advise you don't. Any child stupid enough to trust an adult with stories about unexpected body projection typically doesn't make it past their eighth year before turning up dead in eight different states, some non-continental.

Many of our bigged have found moderate success living in group and abandoned homes.

Q. What about love?

A. The ownership of an adult body may have you pondering the many uses of your newly swollen and pendulous genitalia. Your complete absence from the process of puberty means that your sense of self-worth must be extremely high, generating an impression that most would regard as confidence. We ask that you remove yourself from the dating market for the sake of those who had to shed pounds of scab and pus to achieve the rank of adulthood.

Q. How could a popular, coin-operated device shape the fabric of reality as I know it?

A. The horrors of the Laughton family are as secret as they are many. As was popular with carnival machinery of the era, each individual Zoltar unit included war trophies from the British Empire -- mostly teeth. So great was the Laughton collection that. shortly before his death, our company's founder designed a chance game called "Junior Spook's Last Draw" in which a mechanically aided baby skeleton played an entire round of blackjack against the user. When testing during the 1939 World's Fair revealed a negative reception towards death and infant gambling, Mr. Laughton had his entire stock of human ivory dissolved in acid.

So yeah, probably that.

Q. Is there any chance of returning to my old life?

A. The unfortunate few bigged who managed to track down another Zoltar unit have been shocked to discover that attempting to rescind their wish actually makes them double-old. Unless you're looking for a 50-year shortcut to the horrors of geriatric brain diseases, Laughton Amusements recommends staying far away from any of our gear-based entertainment devices that include the personal effects of the damned.

Q. Is it okay if I regret trading in the endless joy and wonder of childhood for the bleak, grim realities of my early thirties?

A. Normally, we would recommend dancing your troubles away on a gigantic, foot-operated floor keyboard, but those were pulled from the market in '89 after fatally electrocuting a family of five.

Have you tried suicide-by-cop yet? You'd be surprised how easy it is.