A lot of people like to think the Cubs are victims of a baseball curse. Hardcore baseball fans will tell you this kind of stuff happens all the time. Curses are like the common cold of baseball. To be honest I don’t know why Bud Selig hasn’t banned witch doctors from the MLB altogether. It seems to me that, given all the boiling eyeballs and rivers of chicken blood plaguing the league, you could give anyone wearing a bone through his nose the boot and put a stop to all the bad luck going around. 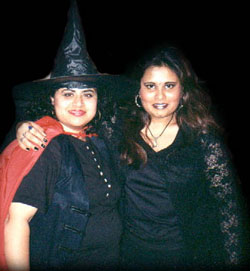 KEEP AWAY FROM MY CUBBIES ALSO MY FRIDGE

While I hate to discredit totally rational theories about immortal, malevolent forces and their nefarious plan to hex a group of professional athletes, I have a few crackpot ideas about the Cubs and their century-long woes. I know my ideas might be a little “out there”, but I’m not expecting you to believe them – after all, I’m just one person. There’s a state full of people who think God himself bent over and cut a divine fart on Wrigley Field, and we all know a large group of fanatics can’t be wrong. Just look at the Muslims!

MY INSANE IDEA REGARDING THE CUBS
by Evan Wade, Junior Conspiracy Theorist

Assuming a gathering of centuries-old forces aren’t out to fuck the Cubs over at every turn – I know, I know, but bear with me – I think my theory might hold a little water. I mean, if they aren’t there, who are you going to blame? Personally, I’d point a finger at the people who traded away Greg Maddux despite having a team ERA so high it could register for Social Security. This is, of course, unless I was a Cubs fan, in which case that finger would be jammed up my nose, looking for some lunch.

But Evan, you may be saying, the Cubs needed defense, not pitching. That’s why they traded a legendary pitcher for a shortstop who kind of looks like Pee-Wee Herman after he got in a fight with a tanning bed.

Well, reader, under different circumstances I might agree with you. We’re not talking about a normal baseball team here, though. We’re talking about the Chicago Cubs. We’re talking about a club that just ditched one of the top arms in the league, even though their second option, Mark Prior, has not pitched a single win since 2005. I don’t know if Chicago has banned rational thinking as a capital offense now or what, but I’m thinking the next “excellent defender” the Cubs pick up should have Inspector Gadget-style spring legs. He’s going to need them to catch all those home runs.

’m sure a lot of you guys are just squirming at the chance to throw the Carlos Zambrano argument at me. Okay, the Cubs have Zambrano. Fine. Say they pull the blinders off his head, he sees the rest of the pitching staff, then instantly drops dead from the world’s first documented stroke/aneurysm/heart attack combination. What do they do then? What happens when someone pulls the rubber cement jar off his nose and realizes “hey, we haven’t won a game since 1997”? Let me pose this question to you: say you had a pile of bricks and window that needed broken, and your two options to do the job were the Cubs’ bullpen and an eight-year-old girl. Would you pick the bullpen? Only if you liked the sight of grown men sobbing uncontrollably, and then you could just buy yourself a ticket to a Cubs game and avoid the vandalism charges.

To be fair, all is not lost. The Cubs (who are about two seasons away from printing “maybe next year” T-shirts decades in advance) traded Prior to the Dodgers, more commonly known as “the Cubs of the West”. Greg Maddux and Nomar Garciaparra on the same team? Ramon Martinez is there, too? Now I don’t need to go to Chicago to feel crippling depression – I can scoot it on over to Los Angeles and do some tanning before I paint a hotel room with my brains!

The Cleveland Browns have made a number of big moves this offseason and had a pretty good draft. With a fairly average schedule this year, what do you think their playoff chances look like?
-Ten Percent

If Ohio added a little iron to its diet the Browns could just as easily be called the Greens. When your team shares a name with something you catch when you drink too much well water at summer camp, you need to be sure you have a good roster or you’ll never hear the end of it. For instance, I could say the Browns need to worry about getting out of the toilet bowl before they plan for a Super Bowl, but I won’t. There’s no need to be mean when I can type a sentence containing “the Browns” and “playoffs” and make my computer crash harder than Shawn Kemp with a straw up his nose.

The NFL recently passed a rule that punishes celebrations after plays. Do you think it's important to encourage good sportsmanship or should the NFL just relax and let the players have fun?
-Goetta

When you can summarize your entire in a single phrase (“steamrolled by fat men”), I think it’s only fair that you can work off some excess energy after snagging a touchdown. Since the NFL’s about two steps away from castrating all its players so they won’t accidentally pop a tent and “dishonor the league”, they might as well go all-out and start impaling people who step out of line. You think a guy’s “got great heart” for dancing around a little bit after making a big score? Sure. We’ll see how great it is when they rip it out of his chest and smear it all over the locker room for doing the Macarena in the end-zone. That’ll teach those stuffed-shirt big shots to be competitive.

Why do sports writers jump all over a college basketball player if he gets a DUI? Who cares if it doesn't affect his performance in the game?
-Bibliophobe

It’s always shocking when a college student makes a poor decision involving alcohol. Popular students, particularly student athletes, have to find ways to deal with their newfound fame. Some turn to religion. Others climb bell towers and see how many heads they can pop like watermelons before some dick in a helicopter decides to fly by spoil their fun. Unfortunately, some tortured souls take a tragic turn towards the bottle, and thus guarantee themselves a life of academic and athletic failure. DUIs are a big deal. Sure, it might be fun to whizz around in a two-ton bullet when you can’t tell if that warm spot in your lap is urine or vomit, but getting caught always sucks. Especially when a bunch of uneducated, untalented penis receptacles (we call them “sports writers”) have trailed you around so long your girl says you smell like a walking associate’s degree. The best way to get back on the right track? Drop a 30-point, 15-rebound game the night after you plow into that bus full of retards. A judge ain’t gonna say shit if you show him you got skills, homeboy. 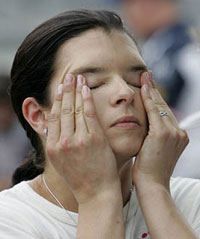 I know the “bitch” in Crybaby Bitch of the Week is usually a lighthearted shot at our target’s masculinity. I know that calling a pro athlete a “bitch” is a good way to get under his skin, and that adding “crybaby” to it infers that he needs to stiffen up a little bit. However, with the current Crybaby Bitch of the Week, Danica Patrick, I need you all to know this: the “bitch” is meant to be taken in the most demeaning, degrading tone you can imagine. I want you to imagine me screaming it at Danica while she quietly sobs in a night gown I force her to wear all the time, trying to vacuum the floor through a torrent of burning tears spilling from her swollen, black eyes.

If you read that and you felt the slightest twinge of distaste because Danica Patrick is a hero who drives a race car even though she’s a girl who kind of has a boy’s name, I want you to find a ceiling beam strong enough to support your fat ass and race your shadow to see who can break their neck faster. If Danica Patrick is a hero I’m Liberace, and looking down I don’t see any prepubescent boys hanging off of my rhinestone-studded penis. Danica is a white-trash role model, a smiling, squinty-eyed mascot that tells the minimum wage women of America that being successful ain’t nothing in the face of being smug. Between her southern-twinged advocacy and that awful “Redneck Woman” song the Dixie Cunts like to spew out of the oozing catcher’s mitts between their legs, it’s only a matter of time until an army of filthy, mustachioed snatches arrive in a fleet of Camaros, looking to plaster every open space with oh-so-witty “I’m The Queen Bitch” bumper stickers. Seriously, people, when they learn to read and/or drive, we’re all fucked.

To be fair, spearheading the “I abuse the welfare system, deal with it” movement isn’t enough to be a Crybaby Bitch of the Week. We all know a dimwitted girl who takes more pride in doing things boys do than performing daily hygiene. You know, the one who looks like a garden slug in too-thick glasses? Kinda smells like an industrial oven full of tuna and used condoms? Cracks jokes about having periods even as the red spot on her crotch expands faster than her waistline? Yeah. Danica’s one of those, but also a huge whiner. For instance: A few weeks ago her car ran out of gas towards the end of a race. Instead of, you know, getting the fuck out of the way so the other drivers could finish, she huffed off like someone hid a tube of lipstick and a mirror in her glove compartment. After a kicking, screaming bitch-fit she finally moved, proving once again race car drivers in general get really fucking pissy over a “sport” that now, because of Patrick, caters to white trash on both ends of the Atlantic.

So now that you’ve made a group of Europeans look better by comparision, what are you going to do, Danica? Move over to NASCAR? Start skydiving? Realize your life is a sham and you’d be a mid-carder in a sport that requires no talent if you weren’t capable of bearing children? Denial: It’s something boys and girls can like at the same time!

Questions for the Ball Bag? Ten-page diatribes about how Jermaine O'Neal is a great forward AND a great kisser? Pictures of supple young breasts? Email 'em to me at pantsfish@somethingawful.com!