Addendum, Re:Karl Being a Fictional Character or Not 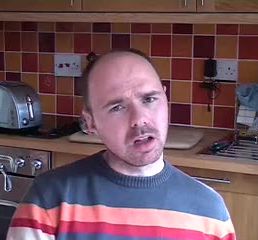 Ok, so one of the other front page writers contacted me asking why I had written an article about the K-Man when he was clearly a fictional character played by an in-persona comedian, like Borat. There's been a lot of arguments since he came on the radio as to whether he was real or not. Obviously, though, I believe that he is almost certainly for real. Here are my reasons, in the form of a list with little letters next to each item:

a. His introduction into the radio show seemed way to sporadic for a written character. At first, he mostly just introduced songs and very occasionally said something weird which they would laugh at, but then they'd ignore him and treat him like a producer for awhile. He only very slowly became part of the actual entertainment part of the show.

b. They had about an hour of talking every single week. I just can't imagine anyone having the time to single-handedly write an hour of material every single week. Obviously Ricky and Steve could've helped some, but they were writing the TV shows at the same time, and they admitted to basically only doing a few hours of writing work a day. I just don't see where the time would come from.

c. Too much of the stuff falls flat. About half the time, they set up something for Karl and he came up with something not very interesting or fairly normal and they'd just kinda move on real fast too something else. They edited those out on the podcasts, but it happens all the time on the radio show.

d. As Gervais has pointed out, if they had come up with a character as good as Karl, why would they spend four years wasting him on a Saturday afternoon radio show? It's not like they have that many projects going on at once where they can put stuff that funny on something a lot of people would never hear. Even Gervais's stand up shows re-use a lot of his jokes from the radio show, so he clearly doesn't have a huge excess of stuff sitting around.

e. Karl's famous enough by now that, if he were a fake, someone would have caught him acting normal at some point. Unless he lives every moment that anyone else is around in character, in which case he's got some dedication

I'm sure he's playing up his established persona at this point, since he acts a lot dumber than he used to at the beginning, but I really don't think he's a fake. The end.

Also apologies to Ricky Gervais for defining you by the fact that you're a fat guy. You're probably the funniest guy working in comedy at the moment. And you are a little fat.