The Hoosiers are an anomaly in the annals of Indiana sports for two reasons – at one point they were good and they won championships. After you wipe up the coffee you just spat all over your monitor I want you to sit down and digest what I just said: An Indiana team was good enough to win a few championships less than 50 years ago. And it was in a real sport, not soccer or the WNBA or some gay shit like that. You remember that scene towards the end of “The Watchmen” where the bad guy kills the giant psychic bug-alien-thing and its death sends a huge telepathic shockwave through the streets of New York? I want you to tell a stranger that an Indiana team managed to accomplish something that didn’t involve a felony charge and see what happens. I hope you don’t mind cleaning your own brains off the ceiling.

The problem with this is that people will not fucking forget about it. Since I live in Bloomington, Hoosier Hysteria's Ground Zero, I can guarantee you this: right now, even as I write this, some middle-aged construction worker with mossy-green teeth and a crippling drinking problem is forcing his faded ‘81 Hoosiers shirt over his turgid, pale beer gut so he can head down to the bar at noon and talk about how much better things were when the Hoosiers were a powerhouse and his kids weren’t old enough to be in jail for meth trafficking. This same man will just as surely miss his chance to plunge his whiskey-dick into the stink cavern of some wrinkled barfly and her wonderful array of crotch-bugs because he cannot fucking shut up about Bobby Knight. Just because she has too much eyeliner and not enough teeth doesn’t mean she’s stupid – she knows that when you’re obsessed with a man whose biggest accomplishment was “throwing a chair” you’re at least psychotic and probably gay on top of that. 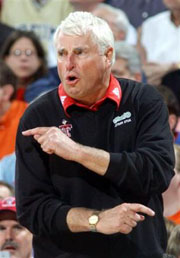 MY BRAIN CONDITION HAS LEFT ME INCAPABLE OF TELLING LEFT FROM RIGHT The problem with Bobby Knight is that he is an insane old coot with the temper of a Chinese warlord. Although I have no proof of this I’m also pretty sure he suffered a stroke or a bout with Bell’s Palsy recently, which makes me wonder a number of things:

I don’t have an answer for the first four I can confidently say no to the fifth. The NCAA could allow the Hoosiers a team that consisted that consisted of four Michael Jordans and Jesus Christ himself at center. They could carry handguns onto the court and shoot anyone they deemed “problematic” for their defense (read: everyone, up to and including the cerebral palsy kid in the wheelchair watching from the front row). The visitor’s locker room at Assembly Hall could double as a gas chamber and still some idiot with an extra chromosome and half an opinion on basketball would bitch because Bobby wasn’t involved. That is, of course, until his sister quieted him by stuffing her scabby muff in his face, but even then you’d probably hear a muffled “’87 champs baby whoooo” coming out of her cellulite-stained ass like she was a disease-infested megaphone.

The Colts are a hard team to root for. When you admit to other sports fans that you like them you are instantly classified as a faggot. I don’t mean the figurative “faggot” people jokingly stick on their friends and Pope John Paul Benedict II, either, I mean a full-blown AIDS vampire with a mouth full of rusty syringes and a lisp that sprays HIV-spit all the way across the room. You say you’re a Colts fan people slowly back away, hoping your opinion didn’t rub off on them and they won’t end up soliciting sex at truck stops with “I Heart Peyton” scrawled across their bare chests in blood from a child they just molested. People put plastic sheets over televisions when watching their team play the Colts for fear that a fan might jump from the screen into their living room, kind of like “Poltergiest” except the ghost is actually a large, hairy gay man and he makes everyone dance to show tunes before systematically raping them all with a window-mount air conditioning unit.

This is not the fault of the Colts, however. To prove this I will use a simple mathematical formula:

If you live in Indianapolis it’s pretty easy to test this theory. Simply walk outside, shout “Ron Artest”, and see how many times you get punched in the face before you hit the ground. Bonus points if cars swerve onto the sidewalk and try to peel out on your face while everyone’s kicking you. With other high-coverage teams, the ones that win championships, it’s not too bad to be a fan. It’s a lot like being a retard with a massive penis: People might make fun of you for your lopsided eyes or inability to take a shit outside of your underwear, but hey, at least you’re packin’. You can roll that fucker up behind your back and belly-crawl around your bedroom like a giant retarded snail if you want. Adversely, when you’re a Colts fan, it’s like being that same retard except your dick looks like a little pink Tic-Tac – they’ll make fun of you for looking funny and shitting your pants, then for having a penis that resembles a GI Joe doll’s index finger. It’s a lose-lose situation. 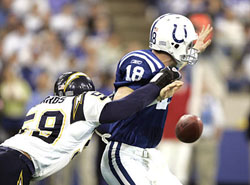 Must be the playoffs!

So what do the Colts do to get over the hump? It’s simple. Keep Peyton during the regular season and hire someone else to take over as QB in the playoffs. I’m no GM but I have a few suggestions that just may work out:

Ben Roethlisberger: I know this isn’t entirely plausible but it could really work well. Peyton Manning, when working in a normal capacity, is untouchable. After he gets sacked, however, his brain goes into some sort of crazy reverse mode and he decides to throw the ball away from his teammates and towards people on the other team, who love to catch his throws and return them for touchdowns. Big Ben, on the other hand, loves getting hit in the pocket. Hell, his completion percentage goes up after he takes a hit. Since the Colts offensive line does great through the regular season then turns into a bunch of six-year-old girls in the second round of the playoffs every year, why not let Big Ben come out and take the hits? I hate to make a tacky motorcycle joke here, but the man can stop cars with his face. If his percentage goes up after a defender touches him, what do you think’s going to happen after he won a battle with a fucking Chrysler? Now that's he's flown face-first into a windshield he's going be unstoppable. Forget 100% completion. He’ll throw for 150% and probably catch half the passes he throws, too.

Adam Vinatieri: This sounds strange on its face but stay with me. Peyton Manning can do no right in the playoffs. Adam Vinatieri can do no wrong. I know he’s a kicker, but what if he played QB in the playoffs? I mean, we signed the guy to some crazy multimillion dollar contract despite the fact that he’s older than the rest of the team combined, so we might as well put him to good use. Honestly, if it’s the playoffs, I don’t doubt him when it comes to anything – he could probably kick a field goal, perform CPR on himself, make a sandwich, and be dancing in celebration before the ball even went through the uprights. Hell, Peyton could even kick in his place: Just do something like on “The Waterboy” and tell him the ball is Mike Vanderjagt’s drunken, gloating head and he’d kick it out of the arena.

One of those football-shooting cannon machines: Say what you want, man, but those things are fucking accurate. If the south would have had one of those in the Civil War I’d likely be mocked for having a “The North Will Rise Again” bumper sticker and supporting some whackjob anti-slavery congressman. The Colts could sign a football cannon for a fraction of Peyton’s contract and have someone on the team who doesn’t choke in the clutch (anyone but Peyton) aim it in the direction it needs to fire. As a bonus, if someone tried to sack that thing they’d break their goddamn shoulder. If they wanted to run a QB scramble the whole team could get behind it and push all the way to a touchdown – they’d be mowing motherfuckers down. That’s ingenuity, folks.