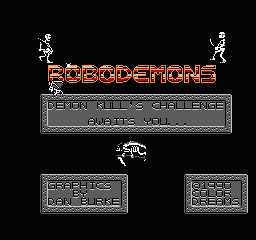 At a Glance: Hey there Romkateers! It's good to be back from my relaxing vacation on the brink of death, and what better game to welcome me than one from the legendarily shitty Color Dreams, Inc.?! In case you're not familiar with the magic, Color Dreams was the only NES publisher not to get the official Nintendo Seal of Quality, which meant it had to "reverse engineer" all of its games. It's sort of like someone shoving random objects into a toaster and expecting to get a delicious mealactually it is not at all like this Raptor Red is a moronShut up and read before I breathe on you. 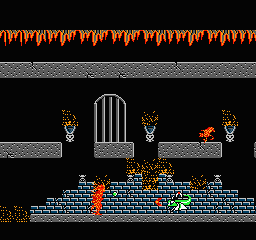 Death by incessant projectiles was, amazingly, the least of my worries.Story: Robodemons is unusual in the world of godawful 8-bit games in that it actually gives you a semi-detailed reason for shooting little blips around the screen. Unfortunately I have no idea what that reason may or may not be because the exposition screen looks like this. Therefore, it's more likely I'll someday get through all 1200 pages of Les Misrables in the original French than the entirety of that hideous block of text, and I could probably do so while being tortured by eels.

Gameplay: Well, you are a futuristic robot man, fighting demons and occasionally flying through space. Gameplay seems innocent enough at first, consisting of the tried-and-true "go right" and "hop" formula. But despite being a superfuturistic cretin with a jetpack and a killer dental plan, your weaponry consists of... a boomerang. Not even a magical space boomerang, a regular didgeridoo, shrimp-on-the-barbie, Bruce boomerang. I assume that whoever came up with that idea was either drunk or Australian. But I repeat myself.

Anyway, the boomerang is bullshit. Demons and their myriad projectiles (because it wouldn't be Hell without projectiles now, would it?) come at you from all angles, but you can't crouch while firing, no sir! You can jump and shoot, but it mysteriously brings you directly into the line of fire 99 times out of 100. The boomerang will curve up slightly at the end of its trajectory, which is how you hit hovering things. Of course, the boomerang's path is also 2/3rds of the whole screen, which scrolls a lot. Therefore, you have to run forward to move the screen along, then tiptoe carefully backwards, making sure to keep your target just barely on screen. The developers obviously realized how difficult this would be, so they put in 22,234,506 dancing skeletons to messily devour you instead. Crisis averted!

Graphics: When even the menu screen looks like vomit, it's hard to be optimistic. I have no idea how I'm

The only good that came out of this game was I now have another adorable critter to add to my List of Things Raptor Red's Parenets Would Buy for Her If They Actually Loved Her. I'm still waiting for that Pegasus-Unicorn, old man.supposed to describe the overall pixel art quality, so I'll stick with the details. Almost nothing is recognizable; if you mean to tell me they actually put effort into making that "key" look like a key, I will be a very consternated raptor. In addition to your boogeying skeletons and oogly googly demons , there are tiny little clots that roll around and can apparently kick your ass. I really shouldn't be shocked that white blood cells are deadly when a barely-perceptible blemish on the floor equals INSTANT ARMAGEDDON.

Sound: "WOBODEMONS," boomed the title screen, followed by a clock's chime that sounded like shrapnel reverberating in a banshee's throat. It was then that I knew I was in for a real treat with this job. One man told me the music was high-quality, but that man didn't have to listen to it loop for four hours and has therefore been demoted from his position as boyfriend to "one man." Every time my gutsy little spaceman bit the dust, he went "ARGH." It was pretty intense, sure, but also kinda cut short, like someone in the midst of some real terrible agony but just spotted an ad for 50% at Art Van and forgot all about that.

Fun: When it comes right down to it, I was a little disappointed in Robodemons. Not for being shitty you understand -it certainly is that. But seeing as it's from Color Dreams, I expected explosive diarrhea, the kind that leaves you squatting above the toilet for two hours and leaves your sphincter in a barely recognizable shape. Instead, Robodemons is just your garden-variety constipation which you could probably fix up with a little more fiber in your diet. Where's the bugginess? The unacceptable respawns? the horrible graph - HOLY FLAMENCO-DANCING BEN KENOBI.

Defining moment: Upon reaching the "Level of Flesh" I immediately assumed my game had glitched out, because the alternative was that someone or something had performed a Satanic ritual on my optic nerves. I mean, 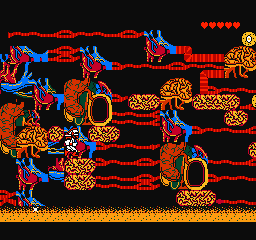 aogjia gorAJGR ag;ra;gr ajorgpAORGJE??!?!!?1/ ?!1look at it. LOOK at it. Christ, it's supposed to look like that -- Jesus. Suddenly, I feel remorse for all the games I have previously given -10 in graphics to; I can hear their innocent voices, crying out to me from a purgatory of pixelated puppies' skulls. Speaking of skulls, the only things that are safe to stand on in this level are those yellow brains. But those slightly more orangey-yellow brains which are totally and completely discernible from the other shit? SIZZLING DEATH FOR YOU. If you can tell the difference, Isalute youwill glue nailbats to my wrists and backhand you until you stop your filthy, prevaricating ways.

But I doubt you'd get to the point where you have to worry about cortex color, anyway, because your mind would first have to cope with this level enough to be able to discern what the Eucharist you're looking at. Whoever built this monstrosity was either an interdimensional masochist or a heavy marijuana user. No, pot doesn't exactly cause you to trip balls, but stoners are always trying to convince me that there's some philosophical merit to uttter retardation. "No no, it's not like these are BAD graphics -they're just DIFFERENT. Expand your mind, man!"

This level expanded my mind all right, causing chronic headaches, a ruptured nasal cavity, and spatter all over my nice linoleum floor.