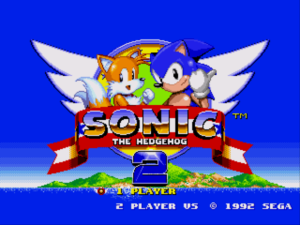 At a glance: As a rule, large groups of other people are almost universally retarded. Therefore, if a game is popular, there's a near 100% chance that it's also fucking awful, and Sonic the Hedgehog 2 is no exception. For too long I've listened to a dark symphony of fanboys spewing its praises, but the past decade has not been kind. Of course, time doesn't really make a difference, as Sonic 2 is, was, and always will be a terrible excuse for a pile of steaming code. So come, neckbearded mouthbreathers, take my hand as I expose this title for what it was: an unfortunate but necessary mistake on Sonic Team's path to greatness.
Platform: Sega Genesis, 1992
Know a terrible ROM? Email me!

Yeah, loads of fun.Story: Sonic 2 wastes no time in screaming "garbage" with its infantile storyline. The medium of video games might have been new, but even in the early nineties the average gamer was a sophisticate in need of an intellectually stimulating plot. Instead, what Sonic 2 gave us was lazy post-Cold War symbolism and dumbed-down (dare I say Disneyesque?) environmentalist propaganda, completely void of the adult appeal of later, superior Sonic titles. Where is the sexual tension of Sonic Adventure 2: Battle? Or the post-apocalyptic drama of Sonic 360, which transcended Orwellian and approached a level of philosophical complexity attained only by masterpieces such as Neon Genesis Evangelion? Sonic 2's sole saving grace is the subtle but poignant homosexual subtext between Sonic and Tails. Sadly, even that doesn't make up for the fact that gamers need some substance behind a bunch of useless hopping and exploding.

Gameplay: Are you honestly trying to tell me that there's a game behind this mess?

Graphics: Even today people rave about how "amazing" Sonic 2's graphics are, which makes me think that the government is drugging our water supply with idiocy-secreting microbes. If people would stop jizzing for a second about how "detailed" it is, they might realize that the "details" are just a bunch of blurry dots flying by at a million miles per second. What the hell is wrong with you? Compare these graphics to a more mature title such as Sonic Unleashed, and it's like 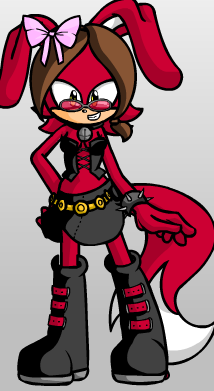 It's pretty painfully obvious that the old Sonic character designs lack the ingenuity of Blaze the Cat or my fursona, Raptor Rose. Incidentally, I've had a chat with Lowtax and we've agreed he's been far too harsh on the furry community in the past. Consider this both an apology for ten years of unjust fursecution, and a promise of beautiful things to come.putting a coloring book on a pedestal next to the Mona Lisa. They lack the shading, the animation framerate, the fucking third dimension. Seriously, Sonic 2 only looks "amazing" if you've suffered brain damage -which, judging from the eye-raping color palette, is entirely possible.

Sound: People who think that this is a good soundtrack are the reason that "non-true" gamers should be bound into straitjackets, weighted to the bottom of the Pacific Ocean, and forced to play games like Final Fantasy VII (the worst RPG I've ever played) for all eternity. What, you think that these "chirptunes" are art? It's a bunch of high-pitched crap clinking at once! Give her a Fischer Price Baby's First Piano and my epileptic dog could do that. There are no lyrics, and none of the blood-pumping drama of titles like "Live and Learn," which I'm pretty sure has been performed by the Japanese Philharmonic. I'll only concede that the music does indeed "mesh well with the level design" -they're both absolute shit.

Fun: But Sonic 2 never stops violating your sense of decency (or your beloved family pets, if so-called "purists" had their way!) Each level glides into a sea of atrocity as if zooming down a diahrea-slicked slip-n-slide: fuck spikes, fuck platforms, fuck water, fuck bumpers, fuck lava, fuck vines, fuck seahorses, fuck everything. On top of the mangled graphics, sound, and storyline, Sonic 2 fails utterly because, much like math, it's too damn hard.

Defining moment: You, obsessing over this refuse without realizing how hopelessly flawed it is. Video games, like anime, come from Japan; therefore, it only stands to reason that the best video games should be as close to anime as possible. I can forgive Sega for Sonic 2 only because it eventually figured this shit out, and now produces titles that I can actually play without dying of embarrassment. Honestly, looking back at Sonic 2, it's almost as if they used to market video games to stupid, lonely children.