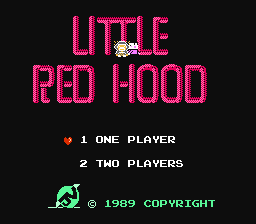 At a glance: Little Red Hood is the second game I've played that's so soul-splinteringly awful that it never obtained a license from Nintendo. There's an assumption that this is a good thing, as the more terrible the game is, the easier a time I'll have writing something about it. This may be true, but it also means that I'll shave more years off of my life by subjecting myself to unhealthy consumption of alcohol as a pathetically ineffective coping mechanism. This week I narrowly escaped with my kidneys, as Little Red Hood comes adorned with the same spine-tingly stamp that graced many of my once-cherished childhood posessions, soon broken into mockingly colorful shards of plastic: MADE IN TAIWAN.
Platform: Pirates of Nintendo, 1990
Know a terrible ROM? Take your hideous secrets to the gwave!

Yeah, I'm totally comfortable with this.m its title, one would assume that this game is either about A) Little Red Riding Hood or B) a midget Fonzie dipped in a boiling vat of pigs' blood. Obviously one would assume wrong, as Option "A" would mean that the entire nation of Taiwan (whom I hold collectively responsible for this title) had thrown me a bone of sanity, and Option "B" would sell horribly, unless there were a secret bonus level in which you could throw polio-laced darts at Ralph fuggin' Malph. Little Red Hood instead consists of a tiny blipping red brick running around a cramped wasteland away from slightly more hostile bricks and occasionally tripping its way down stairs depicted by teleporting tertiary bricks with little lines drawn on them. I smell a classic!

Gameplay: You spend most of your time dodging zooming enemies that, upon closer inspection, prove to be disconcertingly creepy depictions of the typical 4chan user, albeit much, much faster.. After putting poor Red in an enclosed space with them long enoguh to give her permanent psychological trauma, seizure-inducing flashing squares appear in random locales around the map. You arrive in an even smaller, squarer area with more shit that wants to murder you, but possibly also a glorious KEY! You then return to the top level and... well, nothing happens except for the continual cycle of "stairs" "no stairs" and "creepos."

In fact, you have to kick trees to collect fruits. Of course you can't just kick the trees outright; no, you have to hit these goofy little squares next to the trees and only from a certain side. Once you collect five, you may or not advance to the next level, as the voodoo gods and/or demonic gremlins that power unlicensed cartridges see fit. This is a pretty unique feat for a ROM, as it manages to be impossible to discern on your own without being int he least bit complex or entertaining. I had to go to Gamefaqs.com to figure this shit out, thus proving that if you give enough lonely sex-deprived chimpanzees keyboards, they'll eventually produce a 72-page full-color strategy guide for Minesweeper..

Graphics: When I said Godzilla had bad graphics last week, I had utterly forgotten about games like this. Everything is tiny and square, and the realization slowly dawned on me that these are little better than Atari 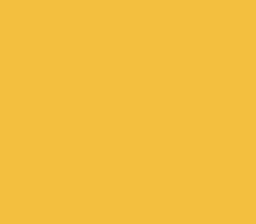 The smoothest animation this side of diabetic blindness!graphics. You'd think that if they leave out the "riding" part of her name, they'd at least make the graphics good enough to point out a hood. Hell, she's not even little, as everything else that's mobile is the same boxy size and shape (well okay, there's some exceptions, but they're nothing to be proud of.) Okay, at least they got the red part, I'll give them that. But colors are basically all this game does right, as they use the same scene for about five minutes of gameplay until you get to a new world and then OH LOOK! A PALETTE SWAP!

Sound: I sure would love to comment on the music! You'd think it would be easy, as it consisted of a single agonizing dull tune that looped over and over and OVER again to the point that I'm pretty sure it sterilized me; the song's so goddamn tenacious in its awfulocity that it's burrowed itself into my DNA to the point that every child I ever have will emerge from the womb humming it, thereby ensuring that all of my potential progeny will end up a red smear on the delivery room floor.

Yet as powerful as its effects may be, I can't actually remember the song, really. It is far outshone by the horrific sound effects, which are obviously sparse in a game of such quality but certainly memorable. Every time you perform an utterly useless jump, for example, the game shrieks at like your mother does whenever you forget to rinse the semen out of your necfkbeard. Of course, it pales in comparison to the game's truly singular sound byte, but we'll get to that in a minute.

Fun: In a strange twist of fate, this game was fun. It was one of the very few games I have ever played that was so astoundingly horrible, I didn't need to put that much effort into it. How many hours does it take to determine 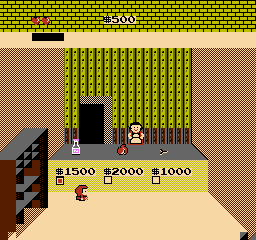 that running down a random blotting of apperating stairways is not much fun? Not a lot of them! So I guess Taiwan is off of my shitlist, meaning next week I'll have to viciously go after a game from the runner-up of hated countries, Australia! Well okay, it's love-hate with Oz, really; someone has to be the only country in the world worse than America and make me feel good about myself.

Defining moment: Despite generally being about as exciting as tooth decay, Red Hood shines through in with the most melodramatic video game death scene in the history of pixels and unpleasant noises. If too many creepypedophiles- I mean refined gentlemen who appreciate the subtly whimsical humor of Nippon's moe genre - run into Red, the screen flashes violently and Red lets out a long continuous noise similar to that of a pair of cyborg rats in a running blender, locked in the carnal pleasures of the flesh. Honestly, the little cube of a harpy should get some kind of award for it. I mean if Penelope Cruz won an Oscar for thrashing around like a heroin-starved maniac, I don't see why Red should be left out. Now all we need is a polyamorous relationship with Jeck Beenstack and Lil Bow Peepers and we've got the perfect awkward movie to see with your whole family!