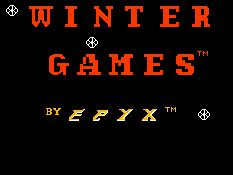 At a Glance: I’ve seen more than my fair share of retarded NES games over the years and years and possibly even more years that I’ve been alive, so I have become somewhat of a shitty game connoisseur. I can easily tell exactly how the developers fucked up a particular game by simply being in the same room as a person who is related to some other guy who knows someone who’s heard of that game. So when I loaded up Winter Games for the NES, I was pleasantly surprised to discover that it was actually an amalgamation of shitty minigames, not unlike American Gladiators. My appreciation for crappy software helped me enjoy the game on a much deeper level once I started playing it, and I felt the way a snooty French trufflephile who critiques fine wine feels after trying some lima bean soup flavored with Extract of The Potentially Malignant Tumor We Tore Off The Leg Of Some Guy We Found Floating In The Water Near The Waste Treatment Plant. And if you think I’m exaggerating, then....well, yeah, okay, I’m exaggerating. But I still hate this game. 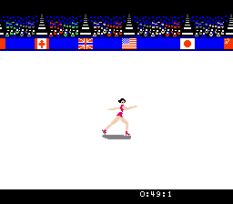 I have no idea what that thing is, but I want it to die.

Every 2 years we have the Olympics, and they demonstrate a spirit of camaraderie and sportsmanship as countries from around the world unite while athletes compete fairly and honorably in contests of strength and skill. However, I refuse to believe the Olympics are in any way a good thing, simply because they spawn some of the most godawful games I’ve ever had the pain of playing and the joy of throwing in front of moving cement trucks. But rather than review one of the more recent calamities like Sydney 2000 for the Dreamcast I decided to review one of the older examples, so that we may reveal the root of this evil and determine a solution. Personally I recommend sterilizing and/or euthanizing any game company employee who is caught saying “Hey, let’s make a game based on...” followed by the name of any recently popular movie, TV show or event. But I’m relatively young and I won’t be able to do that for at least another few years, so for now I’ll do the next best thing, and that would be warning people about the four stupid, stupid minigames they managed to pack onto one stupid, stupid NES cartridge. So enjoy this horrifying glimpse at what Caveman Games would have been like if it hadn’t been any fun whatsoever.

Hot Dog Aerials (ski jumping): This is a perfect example of what ski jumping would be like if the event was created and run by the Organization of People Who Hate Ski Jumpers And Want Them All To Die. Normally ski jumpers get a nice big ramp to build up their speed before they go hurtling through the air, but Nintendo ski jumpers don’t have that luxury. You have to start from about ten feet in front of the ramp, then you slide towards the ramp at a surprisingly rapid speed before you’re flung into the air rotating and flailing your limbs everywhere. Then you plummet earthward and land painfully on whatever body part happens to be closest to the ground when your altitude makes the extremely important transition from one meter to zero meters. And even when I do my trick wrong, land on my face, splatter into a pile of blue goop and lay there with my skis sticking in the ground right through where my leg would be if I hadn’t undergone my rapid goopification process, the bastard judges always give me a score of 0.0. Even the American judge. I swear he’s on the side of the terrorists. 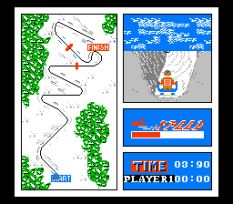 I really, really hope I got a buggy ROM and the game doesn't actually look like this.

Speed Skating: While the premise of “skating really fast” is certainly a good one to base a competition around, it doesn’t translate too well into a Nintendo game. Well, at least not when the graphics look like they were made by drawing a big blue rectangle and then selecting the paintbrush tool, choosing the color white and holding the mouse up against one of the novelty Pokemon vibrators that Epyx employees all keep in their offices. I know it’s an 80’s console game that also appeared on the Commodore, but even by that standard it looks awful. Instead of having the random white spiky things scroll to the left as your guy skates to the right, they simply slide back and forth while he makes a scissor motion with his legs until he goes 400 meters. In the Dino Racing event in Caveman Games they were at least able to make the scenery move to make it look like you were actually covering distance. Although I really should stop mentioning Caveman Games in this review, since Caveman Games was good and I’m afraid if I mention it too many times people will get confused and think Winter Games is good, and that is simply unacceptable to me.

Figure Skating: I really didn’t get this event, even though (as I may have mentioned before) I am the most intelligent person of all time. Of course from now on when I claim to be intelligent I’ll have to conveniently forget about the letter Blockbuster sent me yesterday about the movies I rented over a month ago and forgot to return until today. Anyway, the Figure Skating event is strikingly similar to the Speed Skating event, with two major differences. Instead of controlling a speed skater in a uniform, you’re controlling what appears to be a long-legged, horribly malformed version of Olive Oil from Popeye. The other difference is that she/it can only skate forward at approximately the rate of fungus growth, and she can do tricks. She boasts a huge arsenal of two total tricks – one is falling on her face, and the other is jumping up in the air, twirling around and falling on her ass. Not surprisingly, after my horrible routine and my failed attempt at bribing the French judge with a croissant I ended up with a perfect 0.0 average. 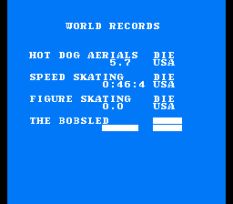 Hey, relax, records screen. Just because I suck at all your events doesn't mean you have to hate my whole damn country.

Bobsled: Having seen Cool Runnings a bunch of years ago, I consider myself a certified bobsledding expert, and in my expert opinion the bobsled event in Winter Games is not particularly good. But it isn’t horrible, except for how when you go off either edge, your bobsled just warps back into the center and turns sideways for a couple of seconds before returning to the beginning of the course. I know it would have been hard for the Epyx managers to get their programmers’ fingers off their triple bacon burgers and onto a keyboard so they could write a subroutine that makes the bobsled sprite slide off the screen, but they could’ve at least tried.

Weapons: There typically aren’t weapons in this type of game. I suppose there were clubs in, uh, that one game I don’t want to mention too many times, but Winter Games is a whole lot crappier, so of course there aren’t any clubs.

Enemies: It’s the Olympics, so the only enemies are those damn communist Russians. But I don’t know if I’d really want to pick a fight with the Russians. On one hand we have the most powerful army in the world, but on the other hand they have Zangief. It’s a tough call.

Levels: There aren’t any levels, so the only way to judge your skill is from the scores given by the evil corrupt judges who for some reason didn’t appreciate my figure skating routine where I made ass-prints on the ice for a minute and a half.

Bosses: No bosses. But I still need to fill this space, so I’ll take this opportunity to wonder out loud how I managed to forget about two rented movies for an entire month. Christ.

Defining Moment: Doing a triple backflip off the ski jump ramp and smashing myself into a mess of blood and organs on impact, and getting a 0.0 average for all my trouble. FUCK YOU, JUDGES!