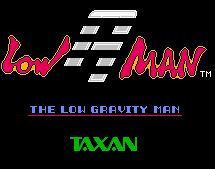 At a Glance: Lots of pointless superheroes have been created over the years, but Tanax has managed to create a superhero that is not only stupid, but also ranks among the top ten of all time in the “why the hell is he bragging about that superpower” department. If you happened to think the fact Raphael had a shell really made him stand out from the other ninja turtles, then then take a gander at this equally unique and fearsome hero. Ladies and gentlemen, I give to you...a Nintendo character with the ability to jump really high!

From the twisted minds of a specialized minority group within the game development community - a minority group I like to call “people who think jumping really high makes a fun game and have obviously never played Mighty Bomb Jack” - comes Low-G Man. Low-G Man (I assume the name stands for “Low-Gravity Man” and isn’t supposed to imply that he’s a tru thugg leader of a gang of angry midgets) apparently is not aware that nobody is impressed by a Nintendo character’s ability to jump high. Hell, Mario can jump as high as this guy can, and he can do it while dodging fireballs and hammers thrown at him by a giant koopa ten times his size. The ability to simply run around and jump over bullets is not remarkable or shocking, no matter what Skip Rogers says.

Such an epic introduction.

Game Plot: The game’s intro spins a fantasic tale of futuristic free enterprise, the beauty of nature, and Low-G Man’s heroic journey to thwart an alien race’s sinister attempt at undermining humanity’s grip on the galaxy. And as an added bonus this entire tale takes 23 words to tell. I’m a big fan of retarded Nintendo introductions (Bad Dudes being my all-time favorite), so I was extremely disappointed that instead of a guy attempting to gauge my approximate level of badness I was greeted by a few screens of text accompanied by drawings that look like they were made by opening up MS Paint and smacking the mouse around for a few minutes with a hockey stick. I was hoping for some backstory on how he got his powers, like he had an uncle who invented anti-gravity boots or the nefarious Doctor Lead Game Developer succeeded in his evil scheme to lower the globalGravity variable from 800 to 200, but since there wasn’t any backstory I had to come up with my own theories on how he got his powers, and as you can see that didn’t turn out too well.

Enemies: Since you’re a magical pogo man with a gun (anyone who’s seen The Phantom knows why a superhero using a gun is bad) normal people don’t even bother trying to oppose you. Instead your enemies are robots – some look suspiciously like the imperial walkers from Star Wars, some look like giant bats and some look like spinning squid. Even though you carry around a gun, your gun doesn’t kill the enemies. Instead they just freeze in place when you shoot them, at which point you can run around on top of them as if they were part of the landscape. But they only stay that way for a few seconds before returning to their previous not-part-of-the-landscape state and damaging you. The only way to kill the enemies is to stab them with your spear, which only goes straight down or straight up. That’s a good part of the reason why this game seems like it was specifically designed to piss you off by programmers who have a deep and personal hatred for you and whose goal in life is to program games that annoy you to the point where you go insane, drink an entire bottle full of rubbing alcohol and stab everybody within a two-block radius to death with the shards of your broken controller. If you don’t have a broken controller in your house right now, I guarantee you will after playing this game for five minutes. 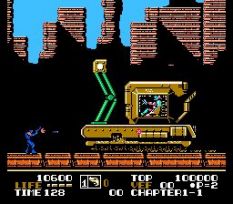 This is no ordinary construction vehicle. This vehicle constructs DEATH!! ...wait, that doesn't even make sense.

Number of Levels: I honestly have no clue. I wasn’t even able to get past level one, and this may or may not be due to the fact that I’ve barely slept at all in the past few days and I feel like my neurons are splattering all over the inside of my sleep-deprived brain like little balls of molasses. But level one was tedious enough to make me collapse on the floor in fright and curl up into the fetal position at the mere mention of level two, so it’s probably good that I never made it there.

Number of Bosses: I wasn’t able to beat the boss of level one, which just might be the reason I never got to level two. When you get to the end of the level, the enemies all mysteriously disappear while a guy in some kind of construction vehicle drives in from the right side of the screen. He then proceeds to shoot at you constantly while driving back and forth and swinging at you with some kind of ball-and-chain rig. Even my tremendous jumping abilities were no match for this foe, so after he shot me a few times and ran me over, I used my awe-inspiring superhero vocabulary to call him “a big jerk.”

Defining Moment: The defining moment will come tomorrow when I see a construction vehicle on the side of the road and swerve to smash it and take it out. Somehow I doubt my Toyota Rav-4 is going to do that much damage to a Caterpillar, but hey, when you’ve had as little sleep as I’ve had, anything is possible!