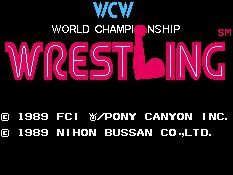 At a Glance: Of all the possible concepts for an NES game, you’d think a wrestling game would be the hardest to screw up. I would understand attempting to create a complex game with deep, varied gameplay and failing, but a company called Pony Canyon wasn’t even able to come up with a good game based on the simple premise of two guys in spandex beating on each other until one of them falls down and gets pinned, shortly before the corrupt ref refuses to count and the wrestler bodyslams him through a table while both wrestlers’ managers come out and beat on each other with chairs until the two wrestlers decide to reconcile so they can become the world tag team champions and they both get revenge on the corrupt ref by stealing his wallet and making big-ticket purchases with his credit card until the credit card company forecloses on his house and reduces him to a withered shell of a man who spends all his time collecting dead rats out of dumpsters to sell to hungry homeless people for cocaine money. Also, run-on sentences are fun. 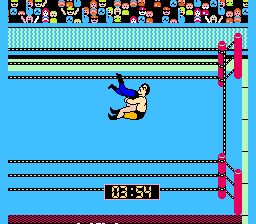 The character sprites actually don’t look that bad for an old Nintendo game. The sound is a different matter – all the sound effects sound like resampled, pitch-altered versions of the same recording of all the members of Slipknot vigorously rubbing balloons on their big, stupid masks. But that isn’t the real reason I hate this game – the real reason is the wide variety of utterly retarded moves you have to use on your opponent. Here is a list of the most common moves you’ll see. I have also included a picture with each one, mostly because I am a terrorist with an evil scheme to bring down SA by wasting as much server space as possible in each review until the server is so overwhelmed with data that it physically implodes in the colocation rack.

Kick to the head: This is a relatively simple attack, since all you do is jump up and give the other guy a good ol’ boot to the side of the noggin. It is an amazingly effective kick, since not only does the opponent register a look of shock when you carve your boot’s tread pattern into his temple, but he continues standing there with a shocked look on his face while you roll on the ground and get back up. Then after his brain kicks back into gear, he remembers that he’s supposed to fall and flops over on the ground. It's very rewarding.

Do-it-yourself Rhinoplasty: This not-particularly-smart move involves you smashing the opponent’s forehead, an extremely hard part of the human head, with your nose. While it’s true that after playing this game for a few minutes you would probably welcome having your nose smashed backwards into your brain, your little guy on the screen is not so lucky. Instead the opponent mysteriously falls to the power of your small cartilage-filled appendange of death while you sit there and wonder how each and every developer apparently managed to find a large enough needle to give himself a shot of heroin directly to the brain stem.

Knee up the ass: If you don’t like your opponent, feel free to simply bust a cap in his ass. A kneecap, that is! HAW HAW HAW! Uh, anyway, this attack consists of grabbing the opponent from behind, lifting him up in the air, and dropping him back in the same place with your knee in his ass. I’m not sure exactly how making someone’s ass hurt would lead to a pin, in fact you’d think it would make being flat on your back uncomfortable enough to make you struggle really hard against being pinned, but that’s just the opinion of a wrestling newbie who has never once had the inside of his large intestine introduced to a stranger’s knee.

Crash Dummy suplex: The game tries to claim this is a “double-arm suplex”, but I know better. In this attack you flip the other guy over by his arms, but in mid-air the opponent decides to do a crash dummy impression and have his head pop off and float above his body on the way down. I tried to find another hidden move to see just how good my opponent’s crash dummy impression could be, but unfortunately I wasn’t able to find the secret button combination that makes you strap your opponent into a Miata and send him into a brick wall at 70 miles per hour.

The “run around the ring, smack into each other, fall down and lay there for a few minutes” attack: This was not the most intimidating move in my character’s arsenal, but he sure did love to practice it. As my clever made-up name for the move suggests, we would frequently run around the ring and butt heads simply because we both forgot to do a clothesline or a dropkick. I probably could have started hitting punch to clothesline after a few collisions, but watching them run into each other and fall over was a whole lot funnier, and trust me, when you’re stuck playing this game you need all the amusement you can get.

My wrestler also had the ability to pick the other guy up and gingerly set him down, dive out of the ring on his head and perform a deadly maneuver that involved picking the opponent up and chewing on his stomach while both characters flashed different colors. However, I couldn’t devote a paragraph to each of them because the ‘weapons’ section is approaching fast and there’s nothing you or I can do about it.

Weapons: Oh shit, it’s here. There’s really only one weapon in this game, and that’s the giant wrench that flies out of the crowd occasionally when someone gets knocked out of the ring. The arrival of this weapon always heralds the end of the match, since the opponent would invaribly pick it up, bust my guy over the head with it and climb back into the ring while my guy collapsed and laid in the same spot until sometime around the 2006 congressional elections.

Enemies: No matter who my opponent was, he would almost always beat me in the same way – kick my guy until he bent over, run up and perform one of the weird attacks mentioned above, and repeat until I got pinned. But everyone loves variety, so occasionally he would take the easy way out and win by reducing my skull to a coarse powder with the aforementioned giant wrench.

Bosses: No idea. Maybe after you beat all the other wrestlers you have to fight Robo-Hogan, a mechanized version of the Hulkster who always has a giant wrench close at hand to knock you out with. That would be pretty cool.

Defining Moment: Being insulted by the continue screen after I lost. Christ, what a bad sport.