Due to a possible disruption in the space time continuum, we're updating on Sunday instead of the usual Saturday. Don't worry though, next week we'll be back to our normal schedule. In the meantime we're looking into what went wrong; a process that involves finding all employees who are responsible for this mixup, dressing them up in Napoleon costumes, then dropping them facefirst into the ridiculously large gears of heavy machinery. Thanks this week go to: Jason "Vengeance Otter" Johnson (Favorite movie named American Ninja 2: American Ninja 2), Matt "Krang" Eckert (American Ninja 2), Aaron "Elcybergoth" Young (American Ninja 2), and Dennis "Corin Tucker's Stalker" Farrell (American Ninja 2).

The Birds, the Bees, and the Horrific Birdbees 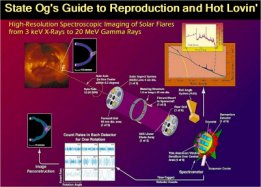 With our kit, the complicated act of courtship that occurs when a man and a woman love each other will be made crystal-clear, even to your ignorant progeny.

Parents: now that your children are getting older, are you starting to feel nervous about soon having to talk to them about the birds and the bees, the three-toed sloths and the red-bellied piranhas, and the differences between men and non-men? Well fret no more, you silly prude. State Og now provides the Facts o’ Life Training Kit. That’s right, now instead of talking to your child, you can simply lock him or her inside a small room with one of our wholesome products!

Our kit includes an extensive collection of manuals and charts, explaining all there is to know about love, sex and how to get revenge after the divorce. From the molecular level on up to the spiritual, your kid will learn everything they need to know about adulthood, and what State Og products can enhance “adult experiences.” Our scientists looked everywhere on the Internet to build this kit and they've regurgitated and paraphrased everything they learned in stunning detail, right down to the inclusion of State Og ads.

Buy our complete set of educational learning-guides and you won’t ever have to talk to, or even be in the same room with, your offspring ever again! With our products the rearing of children is so easy and hands-off, you won’t know how well adjusted your children are, until one day you find the normal television broadcast has been interrupted to show live footage of your child’s latest police-chase or hostage standoff.

The developmental stages of an embryo are explained with such care and attention to detail that it may change your political views regarding abortion and the Strategic Defense Initiative.

Good day to you, State Og enthusiast! It takes a big man to admit when he’s wrong, and that’s why, without his approval, State Og has singled out the failures of a resource employee by the name of Simon Baker this week. The list of Baker’s screw-ups is extensive: he is single-handedly responsible for both the coffee mix up last week so that the decaf machine made regular instead and the September 11th tragedy. He claims both were “by accident,” and that for the latter he “hacked into the airports around the country and mistakenly thought he was playing a game of the Japanese import ‘Fly Airplane Into Building 4: Super Revenge Gaiden.’” Even if all the trouble he has caused was by accident, who can really stand a klutz around the workplace, especially one named Simon?

Instead of firing our below average employees, we prefer to subject them to Dawson’s Creek episodes looped at an accelerated 500 frames per second. In between loops, we point out similarities between what happens in the episode and what we think of the employee we are currently reprimanding. Here is an excerpt from one such interlude with Simon:

“In this episode, Dawson realizes his jealous side when that guy from Friends tries to start a little something-something with Natasha. Simon, this reminds us of how you are unable to properly punch-in before your shift, and then how later in the week you argue about your lower than normal check. We hate you for doing this, Simon. The episode continues as Joey sleeps over at Eddie’s but then misses the Professor’s exam. This puts Joey’s scholarship at a real risk. We are at a real risk of murdering you, Simon. We hate when you trip and spill your tray in the cafeteria every week, just as Joey hates missing exams. Also in this episode, Pacey and Emma are mad at each other, but then make up and have a night of passion. We are mad at you, Simon, and our anger will not turn to passion.”

State Og has a thirst for blood… providing it that is! National blood reserves are at an all time low, what with the sudden terrifying and unexplained introduction of giant robot mosquitoes and hepatitis Y. Therefore the time is right for us to step in and sell bags of the stuff at exorbitant prices. Loki bless capitalism!

The only problem we faced when looking at this situation was how to get all that blood. Some might accuse us of draining plasma from scores of defenseless puppies, but we could never be so beastly! Besides, puppies don't have all that much blood in them to begin with and they squirm too much when you're trying to get the needle in. Also, our lab technician grew attached to one and named it Michael so that plan was right out. Instead we headed over to our skilled team of horticulturists and took at look at what they've been cooking up. What we found in that lab both amazed and amazed us, and we can guarantee that the blood bank industry will never be the same again! What is this miracle invention?

We are proud to introduce the State Og Seeping Willow! This impressive tree is straight out of a thousand tales of the end days, as it stands ominously in an eerily quiet forest, weeping blood from its branches. If that image doesn't make you think health care nothing will! A, B, O, X-, every type of blood that's popular today drips in endless supply, drained from the very soul of Mother Earth. Now everyone can enjoy the bountiful fruits of Her bosom!

For too long the wealthy have been able to look down their noses at the homeless. State Og says it's high time that the world's less fortunate got their piece of the ridiculing action! For a limited time only our highly trained and rightfully feared shock troops will put down their magical singing clubs and pick up deadly spiked ladles at soup kitchens worldwide. Then our Black Hand will ladle out heaping helpings of comeuppance in the form of our special Payback Packs!

The contents of each Pack are guaranteed to elevate any slobbering wino to his highest and mightiest in minutes! Every Payback Pack contains a limited edition glass jar manufactured by Lexus. Now you can store your urine in luxury, and possibly throw it at those rich jerks! The fun doesn't stop there! Enjoy the high life by settling down to a fancy meal, specifically your very own can of Fancy Feast! Unlike dry cat foods, Fancy Feast is loaded with delicious rat blood and dead ticks! That's good eating! Wash down that treat with the subtle flavor of imported mash whiskey, fresh from the exotic locale of Salt Lake City! Only the upper crust can truly appreciate the fine quality of Mormon hooch! Finally, no well-to-do bastard would be complete without a monocle, perfectly poised to leap from your face at the slightest affront. However there was a problem at the Payback Pack plant so you'll have to make do without one.

Some might wonder why Og would give away such high quality items to a bunch of worthless human garbage. We find this lack of faith in our basic respect for life very encouraging, as it shows that our multi-million dollar advertising campaign / jihad is paying off in spades. However this time we are truly attempting to make the world a better place, despite the fact that an iron clad contract binds anyone who opens a Payback Pack to a life of indentured servitude in State Og's spacious uranium mines.

If there's one thing State Og has come to represent over the years aside from torture, global domination, the inappropriate touching of sheep, elderly abuse, and incredibly dangerous defective products, it's science. Every time our scientists wake up from their NyQuil induced stupor, they take a look at the world around them and try to improve on it. Sometimes they look around too fast and get dizzy, at which point they have to lay down for a while. But as soon as they're up again, BAM! Right back to improving the world.

Recently our scientists turned their attention to the plight of astronomers. These poor saps have to study solar objects that are incredibly far away with telescopes, squinting just to see what's going on in the universe. The obvious solution? The State Og Planet Getter. The Planet Getter is essentially a very large grappling hook which will be launched from State Og headquarters and into the cosmos, which is a really big thing that's outside Earth's atmosphere. The grappling hook will latch onto the planet/star/black hole/Death Star in question and pull it back to Earth, where astronomers can get a really good look for once.

Our test launch has already commenced, and if all goes well a trip to the moon will soon be as easy as driving to Wyoming! Unless we miscalculated, in which case you might have to drive to California instead.