Take Me Out to State Og

Welcome once again to State Og, where we don't cork our baseball bats; we just use them to bludgeon officials until they award us with home runs. As a result we currently lead the MLB in runs scored, and we don't even have a damn team. Thanks this week go to: Michael "Slash And Burn" Hollenbeck (catchphrase he's trying to get into everyday vernacular: "Was that my shoe?"), Aaron "Elcybergoth" Young ("Because the puppet said so!"), Brett "Nimmo" Hurban ("Watergate! Ah-cha-cha-cha!"), and Jason "Vengeance Otter" Johnson ("That was your shoe!").

As part of our commitment to providing our employees (be they salaried, indentured, or purchased from rival chieftans) with a safe and happy workplace, several distressing situations must be brought to your attention.

An extremist splinter faction of the cafeteria staff has taken control of most of the fourth floor after a bloody battle with special janitorial forces, and is demanding territorial sovereignity. Extreme care should be taken when visiting the fourth floor, as the latest reports indicate that all captured employees not swearing allegiance to this faction are being robbed and brutally raped. Also, you will have to elbow your way through an assembled throng from the Marketing division, who have been camped out in the dimilitarized buffer hallway since these reports came in.

Earl from Accounting has been confirmed as being back from the dead yet again and terrorizing the third and fourth floor ladies room. Do not use these restrooms under any circumstances, unless those circumstances require being molested by a corpse. If you should encounter Earl outside of the third floor ladies room, do not attempt to capture him on your own. Although in poor physical condition, he is fueled by the very fires of Hell and you will either be killed or stripped of your dignity in a fashion almost wholly nonexistant outside of Thailand, and we'd really prefer to do that ourselves.

Due to a shipping mistake, the hallucinagenic toads available in the torture mine gift shop are actually hallucinagenic, and not poisonous as previously thought.

Aside from those few niggling little concerns, our goal of maintaining a safe and sane workplace is closer than ever to being anything more than a cheap, cynical lie.

School's out for the summer, and once again all the children of the world have something special to look forward to. More accurately, the children of the world who happen to live in certain demographically attractive neighborhoods have a treat coming from State Og! For the four hundred and eighty-third year running our Wonder Wagon will putter down suburban streets all day long, bringing fun and blasting gritty hip hop! As always, the fun comes in massive quantities in the form of a never-ending stream of prizes, launched at great velocity with the pointy ends out. The prizes this year are all new and all excitement, such as:

Dead hamsters with forks in their heads!

This kind of adventure doesn't come around every day, unless it's summer, in which case it does, but the point of this sentence is to make sure that you tell your kids to go out and play in the street right now! Soon enough a Wonder Wagon will come screeching onto the scene driven by an irresponsible maniac, or even a performing artist, hurling prizes every which way! Heads up for fun!

We've been told that Goodwill spends its profits on food for starving families, or something like that. We haven't looked into that, and we're not disputing it. I think we can all safely assume that a company that relies on Susan's sweater getting a hole in it in order to obtain merchandise to sell would probably be stupid enough to give its profits to people who in no way help them create capital in the future.

But, as disgusting as Goodwill is, they do make some money. As a result, we have decided to get in on the surplus goods market as well. The difference between our stores and Goodwill is that we get more unique and hard-to-find objects. By setting drop-off points in odd areas: Rwanda, Miami, The Korean Border; we tend to get the most unusual and sought after items you can imagine.

Let's compare our goods to those of Goodwill:

Goodwill: An old skateboard. That one loose wheel sure adds an element of adventure to acting like a dirty punk, but how does that compare to...
Og Will: An 1100 mph rocket car. We have one, and unlike anywhere else you can obtain these, we don't require you to be certified, trained, or own have a helmet in order to drive this slick baby into the sunset (buildings).

Goodwill: Some bath toy that sucks up water then spits it out.
Og Will: A pipe bomb. For my money, the best bath toy ever made.

Goodwill: 16 O'Jay's LPs. Relive those days before you were born with the magical sounds of the O'Jays. "Ride the Love Train", keep your mind on the "Money", and watch out for those "Back Stabbers"; just like your mom did when she spent her days on her back.
Og Will: A boy. We came to work and he was just there. He's pretty cool. He has one of those bowl haircuts, but that's his mother's fault. He likes to melt things. We were originally going to charge $5 for him until we saw how much he can lift. $10.

And we happen to give our profits to the hungry also, but in a different way. Give a man a fish; he'll eat for a day. Give a man a gun, and he can eat as many of his neighbor's fish as he wants.

Recently, the state government of Oregon proved itself worthy enough to become a State Og business partner! Oregon’s Department of Transportation realized that their simple and straightforward state tax charged on every gallon of gasoline purchased possessed two glaring flaws: it was straightforward and simple. Additionally, it is now a widely accepted fact that all those damn hippies buying fuel-efficient cars do so not to help the environment, but only to spite the good people of Oregon’s state government and to deliberately impoverish her once rich coffers by buying less gas and thus paying less in taxes. So how does poor Oregon plan to rectify the problems of uncomplicated taxes and tax-dodging hippy terrorists?

Well the current project Oregon’s Department of Transportation is researching involves replacing the gas tax with a high-overhead, heavy maintenance, needlessly elaborate and expensive to carryout tax. Of course, this involves the installation of Global Positioning Satellite receivers, radio transmitters, and possibly even solid gold robot chauffeurs in every car. The idea, if this plan is approved, is to generously use expensive satellite-based technology to track the movements of every citizen’s car and then tax them based on the number of miles driven within the state, instead of the current way of just paying a small tax on the number gallons of fuel purchased. We at State Og are stunned! Why the hell didn’t we think of this and market the idea to states and other countries? Let me tell you, heads are literally going to roll at our R&D department!

Just think of it! As you drive down the street in your SUV, people driving in those fuel-efficient economy cars are now paying as much in taxes for using a fraction of the gas you are. Sorry! No more tax loophole for you, mister environmentalist swindler! Also, because the system uses accurate GPS technology, you can feel confident that your travels are being carefully tracked and recorded precisely. You might have to get used to the smirks of a few government officials and gas station attendants who’ll be privy to your travel records, but that's OK. These are open-minded people we’re talking about. They’re probably not laughing at you because they know how often your car is stopped in the parking lots of gay strip clubs, they’re probably just laughing because they know that you like to repeatedly drive slowly around in areas where prostitutes are known to frequent. Also, the number of times a day you go to gay strip clubs really is pretty funny.

So, you ask yourself, how does State Og fit into all of this? Well, State Og wants to make sure that Oregon commits itself to this brilliant plan and we want to be there to help. As consultants, here are some plans we are currently recommending and working on with Oregon’s state legislature and Department of Transportation. So, if you live in Oregon here are some of the services and recommendations State Og plans on providing to help Oregon and her ailing economy. 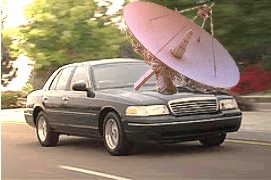 You’ll be ready for a wild adventure out on the road, once your new GPS receiver is installed. Due to the weight and aerodynamic profile of the dish, your car’s mileage will be reduced so much, you’ll be thankful that gas is no longer taxed. The money you save can be used to buy exciting products, like the new State Og periscope.

The Design and Manufacture of the GPS Equipment: To make sure that your car is continuously receiving signals from at least three satellites, we’re going to provide a receiver so powerful it will make NASA scientists weep with envy. Don’t worry about the poor scientists though, they’ll stop crying after they learn how much you had to pay for this piece of equipment state law requires you to purchase. They might even start to cheer up and laugh a little.

State Og Ads: To help Oregon pay for all the equipment they’ll need, we would like to install a special holographic projector inside every car in Oregon, that will at random intervals make large flashing State Og ads appear in front of your face while you drive. It will make driving just like surfing the web, but with more popup ads!

The Tax Tax: Though not limited solely to transportation taxes, this idea of ours should solve all of Oregon’s revenue problems. We realized that when people hand over money to the government to pay their taxes that this particular monetary transaction itself isn’t being taxed. Obviously, there is no reason why the money used to pay taxes shouldn’t be taxed, as well. We call this the Tax Tax and we recommend 10% in addition to a small 50-cent processing fee for every transaction. Here’s the beauty of the plan: Taxes paid on the Tax Tax are not exempt from the Tax Tax, and so on into infinity.

State Og looks forward to many years of partnership with the state of Oregon, or however long it takes for us to get tired and decide to build a giant nuclear-powered spatula and flip it over into the Pacific Ocean!