Reading State Og satisfies readers to the core, but sometimes you're left thirsting for more. When this happens, reach for a refreshing Og Malt Liqour. Not only does it give you 100% of your essential daily liqour allowance, but it has just enough windshield wiper fluid to scrunch your face up comedically and make you the life of the party. Thanks this week go to: Jason "Vengeance Otter" Johnson (got his nickname from: the classic comic book), Aaron "Elcybergoth" Young (eerie inscription on one of the rocks at Stonehenge), Brett "Nimmo" Hurban (famous phrase uttered by football player Joe Theismann as he broke his leg on national television), and Dennis "Corin Tucker's Stalker" Farrell (it's my actual middle name, quotation marks and all). 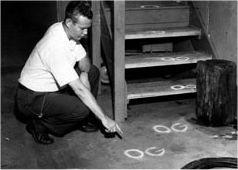 You don't need to be a trained detective to find who's guilty of providing great value and low, low prices!Having spent over thirty years working in law enforcement, I’ve dealt with many different organizations, companies, ordinary citizens, and even strange beasts -- such as the legendary half-man, half-bum panhandling monster. As a result of my work, I feel that I’ve seen a pretty good cross section of society, and from my vantage point I can say without a doubt there is no group of people more beneficial to society than the good people of State Og.

No other organization is as eager to help the police solve crimes. In fact, it’s not uncommon for the first police officers to show up at a crime scene to find State Og agents already there, handling evidence and preparing preliminary reports to help the officers begin their investigation. [Note: Let me tell you, these guys aren’t afraid to get their hands dirty doing forensic work. When we find them at murder scenes, they’re often covered in blood, head-to-toe.] Ever since State Og started providing this special assistance a year ago, I can’t express how thankful those of us in law enforcement are. It really helped decrease our workload, especially after the crime rate started to skyrocket last year. 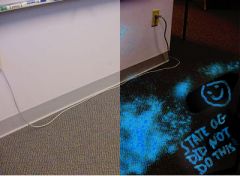 Thanks to State Og brand Luminol, the police can reveal invisible traces of blood, by making it glow in the dark, as shown by this comparative image from a crime scene.

Not only have they been helpful, but Og has also brought my department some incredibly good luck. With the exception of an unfortunate few who all coincidently died in freak otter-attacks last year, every single member of my department has won the State Og Megaton o' Platinum Lottery. After winning untold riches, why do we all remain as officers? Well, like State Og, we believe in giving back to the community, and with Og’s help it’s like they’re doing all the work for us. We just kick back and let Og’s agents go through all available police records. They’ve got a real knack for finding who they consider troublemakers before they cause any mischief. But what surprised me the most about these good Samaritans is their willingness to give criminals a second chance. On a number of occasions, I’ve noticed known felons, some of whom I thought were locked away for life or on Death Row, working for State Og as agents. What a kind and forgiving organization!

Well, I’ve said all that I think I need to about State Og. I hope everyone reading this has gained a new positive-understanding of our friends at Og, and I especially hope all of my compatriots working in law enforcement, in jurisdictions where State Og hasn’t gotten involved yet, can read between the lines and appreciate how I’m trying to help them out. “Looking the other way” and letting State Og run things isn’t too hard to do, and I can say that I’m definitely more comfortable sitting in the leather seat of my solid gold Lamborghini than I would be with a few hundred sets of otters’ teeth gnawing on my trachea.

When you think State Og you think outrageous party fun. Or at least you'd better. Once again we've more than met those lofty expectations, and we are pleased to announce our brand new line of exciting Make Yourself Look Like a Stupid Idiot party games! Yes, nobody's dignity will survive any party intact if they play one of these fine games, because every single one requires that participants scream, shout, leap around like wild baboons and possibly mutilate some very funny bodily organs. It's a hoot!

Mutilate Grandma - try to guess what Grandma is trying to spell with her feet before our trained torturer flays away her wrinkled old skin!

What Did You Just Stuff Up Your Ass? - both the brain and the sphincter get a good work out in this one as your friends puzzle out just what went where the sun don't shine! Comes with a wide variety of vegetables and sporting equipment!

Hide From The Judge - everybody gets in on the fun the second the box opens, as the mysterious Judge seeps out in cloud form, bringing instant death to anyone He touches. Be the last to survive! And then die! The best part? The game is played while wearing party hats!

What Internal Organ Am I Pulling Out From My Navel? - quick wits and gruesome gore combine thanks to a surprisingly small yet potent dose of our own PCP, which, handily enough doubles as sand for the hourglass! You'll never know what your friends think hurts so bad that they have to tear it free from their bodies until the last second. Fun at office parties!

Skewer the Cat - multiple stab wounds never felt so good as you and your friends run around madly, trying desperately to be the first to stick the local cat with one of our oversized shrimp forks.

Druidic Pictionary - feverishly try to guess what demonic summoning spell is being drawn before the drawing summons a demon!

As you can see, there's a wide variety of wacky hijinx just waiting to be purchased at your local retailer, so Make Yourself Look Like A Stupid Idiot today!

Yes, it is a sick world when an institution arises to challenge State Og. Apparently The Society for a Happy Earth (further referenced as ASSFACE for the remainder of this memo) has targeted State Og for several reasons.

1. They blame us for the continuation of slash & burn farming in South America, even after we doused over 1000 acres of rainforest with gasoline in order to deter farmers from expanding their farms into the gasoline-drenched land.

2. They blame State Og for killing their founder's parents, even though it was made painfully obvious that both deaths were suicides in a letter written by both of the deceased.

Dear son or daughter:
Your father and I intend to kill ourselves by tying ourselves to an airliner's landing gear and being crushed by the mechanism. We also intend to sodomize our remains once this has happened.
Love, Mom and Dad

3. They are upset about our current plans to teach praying mantises to fight with knives.

We have tried to implant a spy into ASSFACE, but they have a very rigorous psychological test that must be completed in order to be hired. Question 43 seems to be our weak point: True/False I enjoy stabbing people.

We have learned that "false" would be the answer that ASSFACE is looking for, but none of our potential spies have been able to bring themselves to select this answer. Therefore, we are looking for people who enjoy clubbing seals, judging people, and throwing cinder blocks; but also hate to stab people. If you match these criteria then please head over to ASSFACE and
get yourself a job.

As part of our policy to make the workplace safe, State Og held a company-wide fire/emergency drill this past Friday. The key to this operation was the element of surprise, and we were able to attain this by marking Friday "NOT fire drill day" on the State Og company calendar. So how did the drill go? Disastrously great!

Our Texas offices experienced a simulated nerve gas attack when the feared Og shock troopers blasted hundreds of cannisters of actual nerve gas through office windows, open doorways, and slow moving employees. In the ensuing chaos, 13 of the 1200 workers managed to survive and make their way outside, where they immediately experienced the second stage of the drill: a simulated polar bear attack involving real polar bears and some guy we had never seen before. I think he said his name was Ray. Much to our surprise, Ray not only killed the 13 survivors, but then tore our simulated polar bears apart with his bare hands. With vile globs of spongy flesh smeared around his mouth and a crazed look in his eye, Ray turned to us and ran his blood-soaked hands through his wild hair. We had no choice but to elect him CEO of Bear Massacres for the now-defunct Texas branch.

Next, we simulated a corporate coup when I ran Ray over repeatedly with my corporate golf cart and proceeded to name myself the new CEO of Bear Massacres. I mean, I had to. It was simply too cool of a title to pass up.

From simulated floods to out of control laser cannons to viking attacks, our worldwide drills were tremendously fun to watch. We also gleaned an impressive amount of information from the day's events which will benefit our company's safety in the future. For example: replacing a fire extinguisher's filling with shaving cream is NOT a good idea, nor is "highly flammable pants Friday".