Here at State Og, we've recently discovered that we're rather good at using sledgehammers. In fact we're so prolific that you could say anywhere there is a sledgehammer, there is a State Og agent nearby or not nearby. Thanks this week go to Aaron "Elcybergoth" Young (Intercourse, Pennsylvania) and Jason "Vengeance Otter" Johnson (Can You Believe Our Neighboring Town Called Itself Intercourse, Pennsylvania).

State Og Does the Arts

State Og is well known for its devotion to the arts, spending endless time and resources creating beauty that the world can enjoy. Every once in a while we like to do something without skin in it. Also, not all art needs so much humping. Apparently.

So we've made another mass media breakthrough, providing art that the whole family can enjoy. Next weekend we're running the State Og Artopallooza, your one-stop source for grubby, low budget arts. Every trapping you'd expect from a street festival will be on hand, ready to mildly amuse! We've summoned, bred, built, and nicely asked the best group of artists to perform at our festival.

All weekend long we'll be telling the story of Kawshen Ramo, the wheeling dealing cattle auctioneer and self-styled romantic in the stirring one-act play, "IgottwotwogimmethreeIgotthree." Critics have wisely proclaimed it the theatre event of the year and will be returned to their loved ones shortly. Advance warning to people in the front row: you WILL be forced to shear live sheep at gunpoint and hand knit sweaters for the Gap.

Out and around the grounds of the lovely Vanilla Ice Public Park and State Landfill, we have a gang of roving magicians ready to entertain suddenly and vigorously. In fact we have two entirely seperate gangs wandering around in color-coded outfits, snapping their fingers all the time. Occasionally members of opposing magician gangs will link arms and pull rags out of unlikely orifices. Some of the magicians are ringers from our wizard pool, and will cast hexes that cause your large intestine to wriggle out of your throat and strike like a corba at passers-by. That's some kind of fun!

As if that's not enough art for you, we have every kind of performance artist and freakshow known to man; from the guy who drives nails into his own eyeball to the man who likes to show his peepee to the little girls. We have guys who juggle vials of deadly viruses... with the caps off! We have skilled marksmen who can shoot somebody's soul through a crowd of milling festival goers. We even have people who make Caeser salad without croutons! Culinary madness or taste-based genius????

From the moment you park your car to when you peel out of the lot with an eerily silent mob of mimes trying to claw their way in, you'll know that you've experienced art the way it was meant to be!

The Patron Saint of People Who Patronize Things, Part I 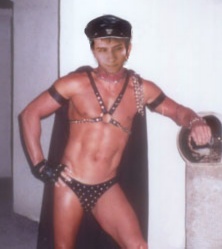 Dennis Farrell is always dressed in the latest styles -- his mother sees to that.

Welcome to another thrilling installment of State Og’s Profiles of the Stars, and of course when I say “stars” I’m not talking about insipid movie and TV celebrities. I’m talking about the gaseous and flaming kind. That’s right! We’re featuring yet another State Og employee profile and we have a very special profile to share with you today: the profile of none other than the State Og Representative himself, Dennis “Corin Tucker’s Stalker” Farrell!

The story of Dennis Farrell is the classic American tale of a young clerk starting at the bottom of the corporate ladder -- sorting letters in the mailroom and delivering them to all of State Og’s bigwigs, using a clunky cart with only one functional wheel which emitted an annoying squeaking sound that tended to attract swarms of large bats. Struggling figuratively uphill, and literally against wave-after-wave of horny bats, he one day finally worked all the way up to the top and became the company’s CEO. Through his hard work and sheer determination, Dennis “Corin Tucker’s Stalker” Farrell eventually achieved this lofty goal when everyone outranking him at State Og mysteriously died after receiving letters laced with anthrax and thousands of very tiny hand-grenades. Coincidentally, that fateful day was the very same day Farrell was hired.

I could talk more about Farrell’s 45-minute rise to the top as a young corporate go-getter and his role as CEO, but since I don’t even know what CEO stands for, I probably couldn’t do it without making up a lot of stuff. Since I don't want any mistakes to reveal me as the fraud that I am, I'm stopping here. Don’t worry, next week I’ll tell you the real dirt on Dennis.