Welcome to another installment of State Og, guaranteed to be the newest Og ever! Special thanks this week go to: Chris "Bimston" Robison and Jason "Vengeance Otter" Johnson. 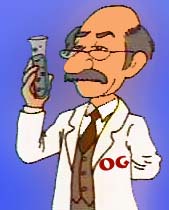 At State Og, we are always pushing the borders of science. Why just last week, we pushed them over into a mud puddle and then kicked them around a bit. It was really funny. Due to the tireless efforts of our Department of Theoretical English, who we force to work in a stuffy closet for 22 hours a day on a diet of imitation brie, we have made exciting new headway in the realm of theoretical verb tenses. With State Og’s latest breakthroughs in verb tense technology, man is no longer constrained to a scant handful of conjugations for expressing the full range of human experience. The DTE has been kind enough to highlight some of its most useful discoveries below.

Use: Any use of the passive voice for passive aggressive purposes.

Example: (sigh) I was am workest on the project you told me to. I thought you would want me to finish that before putting the fire out.

Note: Formerly known as the assive tense but changed due to possible sexual connotations.

Use: Describing an implausible future event that will now come to pass because of Mickey Rourke’s adventures in time.

Example: I will to having become the despotic leader of New Cleveland because Mickey Rourke beat up my grandma when she was pregnant with my dad.

Example: Abe Lincoln would have to be calling you a wop dago to your face.

Use: Describing the exploits of cybernetic cowgirls from the future whose actions in the present negate the necessity of their existence.

Example: She to have took her auto-tracking atomic lasso and captured the eco-terrorists before they could destroy Mickey Rourke’s time machine.

Use: Describing potentially insensitive things that somebody might be doing behind another person’s back (considered to be posterior in the case of four-legged creatures).

Example: At my party, Shauna had tooken a big ol’ dump in my bathroom and didn’t even flush it.

Use: Imitating the broken grammar of an Asian immigrant with poor English skills.

Note: Not to be confused with the Red Man’s Exegesis verb tense.

Stay tuned for more exciting State Og research and technology updates. Next week, our Department of Cost Reduction will brief us on how they trained infants to sew mittens.

The maintenance crew has informed us that the duct systems on the 29th through 41st floors have been infested by a herd, or possibly a bevy or pod, of tiny people. The miniature duct denizens can be recognized by their diminutive stature and adorable shrieks of abject terror at the sight of normal-sized humans. Maintenance Chief Berkonowski advises that the mini-humans are nocturnal and territorial but not dangerous if you avoid skin contact. Nevertheless, caution is advised. To contain the infestation and teach those little bastards some goddamn respect, the tiny people should be squashed or microwaved immediately on sight. Bodies are to be deposited in the mini mass grave on the 34th floor breakroom.

State Og Introduces Its Own Line Of GPS Devices

One of the most useful devices you can get nowadays is a Global Positioning Satellite receiver. Whether to navigate city streets, guide yourself through the wilderness during a hike, or to serve as the heart of your own homemade cruise missile, GPS makes it all easy and State Og’s new line GPS receivers makes it even easier. In fact, our GPS equipment is so simple to use even Helen Keller can use it, and yes we are taking into account she’s been dead for over thirty years!

How does State Og make a GPS device that’s so trouble-free and straight forward to use that even the corpse of a blind and deaf woman can use it? Well, it wasn’t easy and at first even we were skeptical that we could create something technical that even a female could use, let alone a dead one. But we did, by golly. While a conventional and hard to use GPS receiver tells you where you are by triangulating the signals from satellites in orbit, our new GPS device pinpoints your position by triangulating the enraged screams of demons occupying what lies beneath the thin veneer of what our feeble senses are fooled into believing is reality. Why are the demons screaming in the first place? Why not ask them yourself after they displace your soul from your body to the netherworld – a typical but totally harmless side effect of merely touching one of our GPS receivers. Don’t worry, the demons always relinquish their host body after a night or two of hedonistic horrors and, thanks to the Og-Gehenna-Hades Pact of 1994, before they leave your body all demons are legally obligated to carve your GPS coordinates into whatever part of your body they didn’t eat.