My dad was the Thegn and now he's very much dead. You know what that means - time for a Viking MAAAAKEOVER! If I'm going to assume command of this village, I need to look presentable. 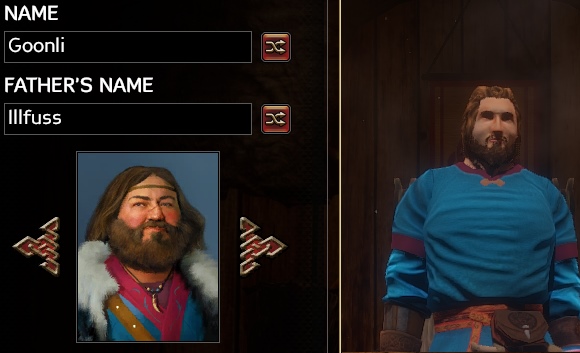 Do you like my new look? My adviser tells me these colors really bring out the dampness in my pits.

After putting a few skill points into archery and charisma (as one does) I'm ready for our big Viking dinner party. Come to think of it, using Viking as a descriptor for everything is a little weird. If you're American do you find yourself proclaiming things like, "I'm going to sit on my American couch and pet my American dog to take my mind off my American country's implosion?"

Before we dig in to the roasted mutton and meat bone shank chops, I need to chat up a few guests. Turns out people hated my dad. Like, everyone. Seems he was real bad at his job. Half the people here are plotting to overthrow me. The other half express their support for my rule, but only after asking if I plan to run the place like a total dipshit. 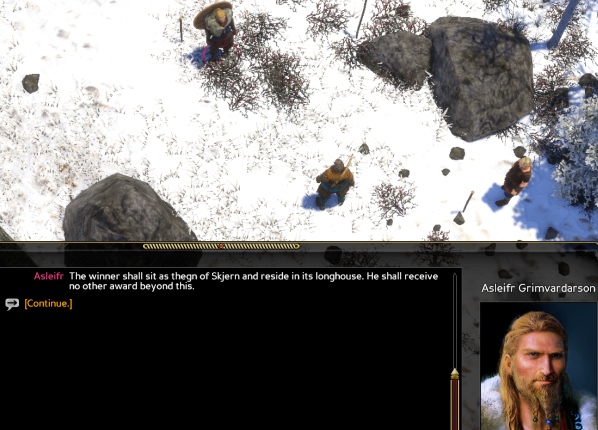 As in real life, my attempts at witty dinner discourse ultimately lead to a desperate fight in the hard-packed snow. The night is a whirlwind of mead, droplets of hot blood releasing puffs of steam as they hit the icy tundra, bellowed challenges denouncing my authority, and lootable containers in strangers' yards. Yes! Rations!

Soon I find myself hanging out with a duo of witches on the outskirts of town. Naturally, their hut is conveniently located near a bog. These witches are easily the most reasonable people I've come across. I've half a mind to ask if I can join their coven. We wrap up our conversation and I walk away slowly, lingering with the hope that they'll call me back. They don't.

It comes to my attention that one old dude has been talking smack about me. I already fought his large dullard sons during the Viking post-meal brawl. Now it's time to sort this guy out. I pull out my handy woven map and set off. During the journey I try to decide if it would be better to apply violence to this man and his farm or talk him into leaving the village. One option involves charisma, which I have, but the other option involves violence.

In the coming days I steer the fate of my village with increasingly major decisions. Do I raid, create alliances, establish trade routes, or hang out with my witch buddies all day? The answer will define the legacy of Goonli and the future of a wary settlement full of yelling drunkards who really hate my dad.

Expeditions: Viking is much more than I was expecting. While I heard nothing but praise for Expeditions: Conquistador, my impression was that the series fell somewhere between XCOM and King's Bounty - a tactics-driven turn-based experience bolstered by a layer of resource and troop management.

In reality, Viking feels like a strategic RPG that lets you decide how often you get to fight. There's a ton of dialog, characters taking part in actual story arcs, skill checks, and choices that seem to have actual impact. You can also spend way too long in character creation obsessing over stats and skill points, which is my personal litmus test for an authentic RPG.

The preview build provided by Logic Artists only included the first of two campaigns. Unless the team has made a breakthrough in reverse design, the full game will have even more stuff in it. More witches? We can only hope.