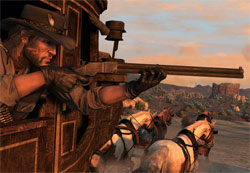 This sort of scene is from a cinematic and not actual gameplay, which is strictly third person.The biggest blockbuster game of the summer has hit in May and the question is why are you reading this article instead of playing Rockstar's mega-budget free-roaming Western game Red Dead Redemption? Not to get ahead of myself, but the answer is, "Because it sucks."

The game opens with a 10-minute snoozer of an introductory sequence showing outlaw turned federal agent John Madsen journey west. There's a lot of heavy-handed anti-Republican references in this intro, like an election-buying Mrs. Bush and shadowy government agents from a town called Blackwater. We get it, Halliburton is bad, no blood for oil, etc.

Following the interminable introduction you wake up in a bunk after being nearly killed by the guy you are chasing. Your nurse is one Bonnie McFarland (get it?), a real buffalo girl who wears parachute pants and has teeth that look like brown bullets (AKA Dragon Age teeth). After a lot of flirting and staring at vistas and talking about how the world is changing, which you do with every character, you finally get turned loose in the wide-open world of Redemption only to find...maybe it's a little too wide open. 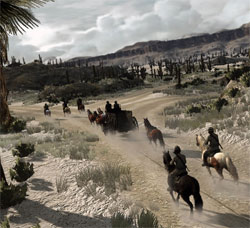 Great graphics can't save this one.The graphics are great. The mountains, desert sky, and many-mile views are impressive to look at, but even racing around on a horse there just isn't enough to do. In GTA IV the world was densely populated with believable people walking out of chicken restaurants, yelling swear words, and falling when you park your car. This game is just empty.

Rockstar's attempts to fill the world up are at times comical. Don't be surprised if you encounter the same "trick" ambushes several times in an hour of playing or ride over a mountain and see dozens of animals scurrying in all different directions in the middle of the desert. I'm no horticulturist, but I don't think it was common even in the much wilder west to see five coyotes, four deer, ten hawks, rabbits, and raccoons all running around in the middle of the day in the same spot. A spot less than a hundred feet from a gun fight.

Historical accuracy is also a big problem in the game. Redemption is set during the Great Depression, so you see plenty of telephone lines and oil derricks mixed in with all the riding around on horses and everyone constantly talks about airplanes like they're magic. Unfortunately, that's where the history lessons stop, as the game seems to think the frontier west's economy revolved around the trade of owl feathers. Owls that can be seen flying in parliaments in the evening and voting above every mountain in search of the coyotes, wolves, and night deer. 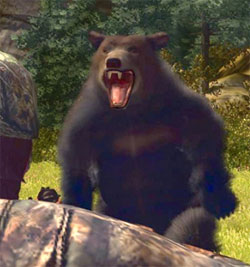 Animals that fight back are a rare treat.The animals constitute another big problem I had with Redemption: violence against animals. Every time you murder an animal, which is gratuitous but I will accept because this is a historical game, you then walk up and gut the animal with your knife. It makes gross sounds, blood sprays on the screen, and worst of all, John Madsen always has some quip. It encourages violence against animals and I'm just waiting to hear of the first kid who decides to shoot mom's parrot and then steal its feathers.

You can ride to a town and play mini-games like poker and a knife game ripped off from the movie Alien3, but in another ridiculous oversight although the saloons are packed with dirty-mouthed harlots John Madsen refuses to get it on with any of them. I realize Rockstar is probably backing off because of the media attention it received for the hookers in the GTA games, but the Wild West basically invented prostitution and to include prostitutes in every town that you can't actually get busy with is torture. What's the point?

If you try to bump into the hookers over and over they'll eventually get knocked back and say something like, "Sorry about that." John Madsen says he's married. Oh, sure, that's great Rockstar. NOT. How about next time include a bachelor protagonist?

One of the big selling points of Redemption was its horse physics. While the horses look realistic, get ready for a lot of difficulty in navigation. The vistas want you to feel like Clint Eastwood or John Wayne, but when your horse is hung up on some rocks or stuck trying to get out from between a bale of hay and a fence the game stops feeling all that epic. It's especially annoying when you're stuck during a random event (these happen infrequently) where you have to react quickly or fail the event. Robbers will get away, screaming women will be killed, and lawless thugs will ride off into the sunset whooping and shooting their pistols while you try to disentangle your horse from the scenery. 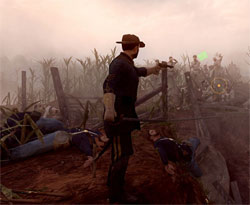 Multiplayer can make for some dramatic battles, but don't be surprised if you wind up disconnected mid fight.The game's soundtrack is terrible. I'm not a big fan of country music, but even I wasn't ready for the minimalist tooting and harmonicas of Redemption. One song, unbelievably, features long stretches of whistling. No, not someone playing a whistle, just a guy whistling. Uh, hello, Rockstar? Yeah, even back in the 1920s they had invented way cooler instruments than whistling, so go wild. Drums, violins, whatever.

I think it was Shakespeare who famously said, "There are only seven plots and they have been retold since time immemorial." Maybe so, but not even Shakespeare could have imagined the connect-the-alphabet-soup on the map plot of Redemption. You see letters on your map signifying characters and you ride to them and the plot unfolds. Occasionally you may have to ride to a purple circle on the map for a little more plot. I don't know which of Shakespeare's seven plots is, "Bump into cows during a storm while some ugly lady with bad teeth yells at you about the herd," but no thanks, Bard.

Multiplayer for the game consists of an open roam system, a posse system for versus games and structured games, and cooperative missions and objectives. The multiplayer elements is ambitious, but marred by glitches, disconnects, and worst of all, racism. When making your character you are allowed to select form several different gang types as well as the categories "Misc Mexicans" and "Misc Women." Blatantly omitted: "Misc African Americans" and "Misc Native Americans." This amounts to Rockstar putting out a sign saying "Blacks and Indians Need Not Apply (to Play)" and is probably worth a lawsuit for discrimination.

If you're looking for a game to ride around and watch sunsets, randomly murdering people and animals, and you're white or Mexican, then Red Dead Redemption might be the game for you. All others should stay away.

If you have any comments or a differing opinion, please contact the author.