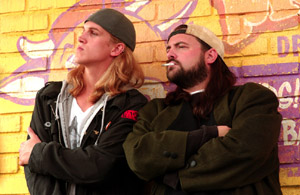 Jason Mewes and Kevin Smith return in the same roles they've had since Smith's first movie, Hey, folks. Pantsfish here. Got an email from long-time reader and contributor Tommy “Turtledove” Malone and wanted to share it with you TM fans. I just hope the news doesn’t disappoint you as much as it did me...

Just got back form an advanced press screening of “Clerks 2” and, as a die-hard Kevin Smith fan, it pains me to say it’s one of the worst movies I’ve ever seen. In a lot of ways it’s like going to a family reunion full of people you’re really sick of, or being stuck on a two-hour business flight with that guy who’s still forwarding Chuck Norris emails around the office. For you sports fans, I’ll use this analogy: You know all the coverage Terrel Owens got a few months back and how sick of it you were? Watching “Clerks 2” is a lot like watching an All-Star game full of nothing but a bunch of Terrel Owenses, except instead of playing football they’re clerks at a fast food station and instead of catching touchdowns they argue about Star Wars and anime and shit.

I’ll try not to spoil too many things, but I’m sure most of you have heard about the opening of the movie, where Dante and Randall arrive at the Quik-Stop for work only to find the building has burned to the ground. What you probably don’t know, however, is the follow-up to that... Randall asks aloud if it’s the work of terrorists, then a CGI thought bubble appears over his head. The camera zooms in on the bubble until it takes up the whole frame, and we see a bunch of guys in the desert using ropes to pull down a statue of Randall’s boss. The camera quickly zooms back out (complete with a “scratching record” noise, followed by something that sounds like a car wreck), and Randall looks at the screen and says “at least no more idiot customers are going to come in looking for a copy of ‘Jersey Girl’,” then winks at the camera.

Unfortunately, this is about as funny as it gets... “Clerks 2” just rehashes old gags until a fart joke is made and someone in the theater laughs just to break the tension... it’s just that bad.

For example, about ten minutes into the movie Jay and Silent Bob show up. Dante and Randall have new jobs working at “Mooby’s”, a fast food joint up the street from the Quik-Stop. This is, of course, a reference to the hilarious scene in “Dogma” where Ben Affleck and Matt Damon kill a bunch of people in a corporation (corporations are soooo bad... my friend Roy told me Wal-Mart often drives out hardworking local businesses) because they’ve sinned so much (because of the hypocrisy of religion... especially the X-tians...ugh). Anyway, Jay and Silent Bob are standing in front of Mooby’s peddling dope when Dante and Randall spot them. Dante rolls his eyes and says “but it’s my last day of work today”. Jay looks, says “snoochie boochies brah”, and he and Bob break out into an air-guitar solo, complete with sound effects.

Really there are sound effects everywhere. At the screening someone told me he closed his eyes and it sounded like the world’s most boring talk radio show, which is pretty accurate... at one point Randall drops a tray of burgers and a “wah wah wah wah” noise plays. In another Jay calls a customer “a real boner” and that “boy-oy-oing” noise pops up... when Dante reveals it’s his last day of work and he’s saved enough money to buy a car and take his fiancee to Florida (the movie’s main plot point) he says “I need...” and the camera zooms up on his face real quick, and then he says “to get a car and get the FUCK out of here” and a “whip-cracking” noise starts playing.

Speaking of Jason Mewes... Kevin really needs to stop giving him drug money. The dude looks like a mummy without the wrapping. In some scenes you can see the track marks in his arms. He mumbles most of his lines and the right half of his face is like... frozen... I don’t know if he had a stroke because of the drugs or what but it’s kinda like watching Abe Vigoda act out a comedy while wailing through his death throes. Not a pretty sight... yeesh. 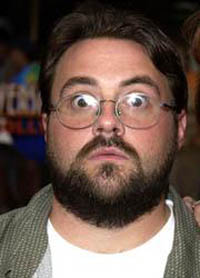 Hahah! He must have just watched Of course the idiot customers are back. Again I’ll bring up Smith recycling old jokes and characters – almost every major character from every one of Kevin’s movies makes a stop through Mooby’s. Brodie and T.S. from Mallrats stop through and argue about comics in front of the counter, then Brodie looks at T.S. and says “dude, let’s go to the mall”. Randall looks at the camera AGAIN and says “those two are a couple of regular Mallrats!” Towards the end of the movie Alanis Morissette makes an appearance as God, when she looks down on Bob and Jay in the parking lot and winks (complete with a little “bell chiming” sound). The clown from Vulgar makes a stop, too (also played by the actor who playes Dante). He orders a happy meal and when the guys tell him there are no happy meals there the clown says “BUT I’M A FUCKIN’ CLOWN AND I’M HAPPY” and then sprays Randall in the face with seltzer water.

Ben Affleck makes a brief appearance as himself, as well. As he walks in Jay says “you were the bomb in Pha...” and Affleck turns and says “shut the FUCK up, junkie.” Then he says something about feeling like he’s in “a bad Kevin Smith movie”... he laughs, then says “just kidding, there’s no such thing” and everyone turns to the camera with a blank expression on their face. It’s supposed to be self-deprecation but it comes off as a masturbatory, stupid little in-joke between Smith and his friends (not unlike the entirety of “Jay and Silent Bob Strike Back”).

But the fourth-wall breakage doesn’t end there... if anything, it’s pretty much all the “humor” the movie has to offer. Randall pauses and looks at the camera so often it’s like you’re watching a horrible episode of the American version of the Office (or a marginally funny episode of the British one). For instance, when Randall drops the tray of hamburgers... after the “wah wah wah wah” noise he says “if this wasn’t a movie I’d be pissed... but hey, it’s a living” and winks at the camera.

In another scene they go to a video store to find a vulgar movie to play on the Mooby’s TV (just to piss the boss off). The store’s walls are littered with Kevin Smith movie posters, and the clerk asks if he can “recommend a little movie called ‘Dogma’” before giving a big thumbs up to the screen.

The movie’s other main plot line comes from Dante’s infidelity. Although he’s saved enough money to buy a car and go to Florida with his fiancé he had an affair with his manager in the earlier days. This doesn’t work out well since neither his fiancée (played by Kevin Smith’s wife) nor his mistress (played by Rosario Dawson) are particularly attractive women... it’s like having two dogs fight over you because you have a hot dog hanging out of your zipper. After another viewer told me Smith’s wife’s head looked like a giant egg with tanning oil splattered all over it I couldn’t look at the movie in the same way...

Of course, the movie revolves around Dante’s decision, and while I won’t spoil the outcome... let’s just say it doesn’t translate well to film. You know that friend... the one you had in high school who obsessed over his exes all the time? Imagine now that he’s 30, he got in an accident that made him look like a giant retarded man-turtle, he grew a goatee, and he’s still complaining all the time. And you have to sit in a room with him for close to two hours while he cries like a pussy bitch. I think I’d rather watch the blood on Jason Mewes’ arm dry...

Before I end this I think I should talk about the Internet grudge thing Kev’s got going on... we all know he made a movie making fun of people who made fun of him... this one’s got twice the anger but half the comedy. He makes a subtle dig at your Web site by having Dante talk about “some piece of shit site that doesn’t do anything but make fun of people in a mean way... it’s really unfunny... it’s something awful...” and many other sites as well. He goes over the top, though, when Dante and Randall are cutting tomatoes and Randall notices they’re rotten. He picks one up and says “these tomatoes! They’re rotten! They Suck! Rotten Tomatoes sucks!” When Dante corrects him on his use of English Randall looks at the screen and says “I hope someone caught that...”

In the end “Clerks 2” is just a big-budget vanity project that does nothing but jerk Kevin Smith off over a number of things. They could have spent a few million more and made “Waterworld 2” and it would have been better... unless you’re a hardcore Smith fan, just say no to “Clerks 2”. If you are a hardcore Smith fan you might not want to go see it either... after this I’m pretty sure I’m done with the Jersey boy until he makes something else with Bennifer... that’s where the real comedy is!

Sad to hear, folks. I had high hopes for this one, too – it looks like you can’t always get back what you once had.