In Praise of David Thorpe's Brother 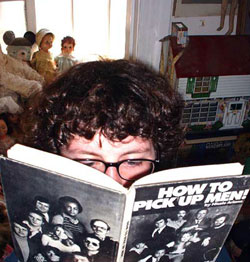 The lesser ThorpeA couple weeks ago I told David Thorpe that I would be writing an article documenting some of his strange habits and destructive behavior. I expected this news to delight him, as he is vain, narcissistic man positively bereft of shame. Instead, it rattled his cage something fierce, as evidenced by his adopting the Bush Doctrine policy of anticipatory self defense, an act in clear violation of international law.

I expect by now that you have read his recent diatribe, titled "the Truth about Josh Boruff." Much of what David wrote is true, just divorced from the explanatory context. Without the necessary framework, some of my behavior might have sounded a little unhealthy. Context is, after all, everything. If you deny the sandwich its bread, all you are left with is an unnerving pile of meat and condiments. David attempted to present to you my life, minus the essential bread.

Now I could go and accuse David of this or that, or go on ad nauseum about his mild kleptomania and how he routinely steals items of little consequence, such as salt shakers and forks, in some childish effort to buck authority. I don't want to wallow in negativity. I want to write about something positive here. David Thorpe is my friend and he comes from hardy stock. He's got a solid family and a great brother. In fact, I'd like to dedicate this entire article to Russell Thorpe, David's adult brother.

It's hard to describe what my favorite thing about Russ is, because there's just so much to like about the guy. With David, it's pretty easy to narrow it down to one particular likeable quality, but that's largely due to the general lack of likeable qualities. With Russ, man, that guy just has so much going for him. He's like a movie with tons of great parts or a book with so many layers that you discover something new and rewarding with each visit.

The first thing you notice with Russ is that he's really got his act together. You know just by looking at him that he doesn't have any unsettling, creepy habits. Like no way does this guy go home and study maps obsessively, like a certain blood relation of his. And why would Russ even want to obsessively study maps? He's not deluded enough to think that he's going to uncover some bizarre Biblical code by calculating the precise distances between Masonic temples. I can't recall Russ ever even mentioning secret codes hidden in maps. 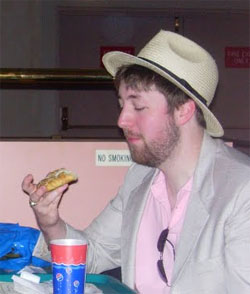 The greater Thorpe as he sizes up a delicacy.Conversing with Russ is always a pleasure. When it comes to good talking points, Russ is fully loaded with all the options. Pick a topic and he's ready to go with a cornucopia of carefully groomed anecdotes, tall tales, and even the occasional ribald joke. He's not going to waste your time with long, harrowing monologues about how the board of health is out to get him or how he got a cut on his arm that won't heal and his cat won't stop licking it. That sort of disturbing talk may suit David, but Russ is used to entertaining a more downtown audience.

When it comes to snappy dressers, it's hard to top Russ. From his fun and carefree summertime attire to his wild experiments in color, he's got it going on. It's like he somehow soaked up all the style from his mother's womb, leaving nothing behind for his baby brother except thin, meager scraps. For the longest time David would wear these ratty t-shirts that were always ripped and stretched in perplexing ways. After about a year I figured out why: David was putting his shirts on feet first, squeezing his entire body through the neck lining. I saw him do it once and it was like watching some kind of deranged birthing ritual in reverse. I'll never forget the sound of his screams.

When you're around Russ, you don't feel dirty. He's a hygienic guy. He washes his hands and cleans up after himself. He's totally sold on the validity of germ theory. For Russ, it's just accepted fact. How such an important scientific breakthrough escaped his brother is beyond me. You can rest assured that Russ does have a problem with eating out of dumpsters and sharing food with wild animals. And while his brother may not have any qualms about meticulously sifting through animal excrement to find seeds, Russ is not down with handling fecal matter.