Divinity II: Ego Draconis didn't exactly have the smoothest launch. It was a dragony RPG that existed at the same time as Dragon Age. It had its fair share of technical flaws. It swung wildly between being a cakewalk and an absolute nightmare, depending on your character's level and the temperament of whichever dark god the game's code served.

With the release of the much-improved Flames Of Vengeance expansion, Larian Studios went back and "re-mastered" the core game, resolving the major issues while porting everything to a new graphic engine. The result is The Dragon Knight Saga, a combination of the improved base game and its expansion. 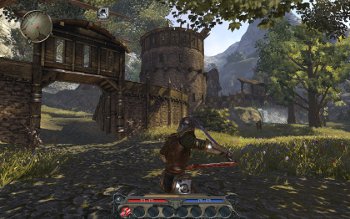 This is essentially a Diablo-style action RPG with a greater emphasis on the RPG, experienced from a behind-the-back perspective. You commit skeleton genocide, collect randomized loot, travel via teleporting waypoint stones, talk to all sorts of people, and embark on some truly inventive and well written quests.

Combat is fast-paced and responsive. You aren't controlling a lumbering doll with stiff animations, but a nimble character that glides along to follow the camera movements, which are closer to a twitchy first person shooter than you might think.

Casting spells and slinging arrows are naturally done from afar, and you are only required to stand still for a fraction of a second as you get off each attack. Then you're free to dodge to either side, jump, and generally run around like an idiot to avoid enemy attacks. You can constantly move while in melee, circling enemies as you hack them apart, performing jumping attacks, and positioning yourself to catch multiple bad guys in the path of each strike.

In addition to your normal attacks, you can invest in special abilities which are fired off with the number keys. These vary from damage dealing spells to unique moves, like a charge that warps you through time and space and deposits you directly in your opponent's face.

All character types can invest in any skill, and while the menu resembles a typical skill tree, you don't need to invest in early skills you don't really want in order to unlock later ones. You still have a limited amount of skill points so it's not unbalanced, just more suited to creating your ideal character.

In addition to regular combat, you occasionally turn into a dragon and murder everything. So there's that.

At some point, you're going to find yourself doing something that doesn't involve the frenzied subtraction of red from an enemy's lifebar. These parts, where you merely walk around seething with barely controlled anger, are the role playing bits, which are every bit as substantial and enjoyable as any fully-fledged RPG of the last few years.

The writing is consistently terrific, from the genuinely creative quests with multiple solutions to the NPCs which are all hand-crafted and infused with personality. Where other games would have copy + pasted Unclickable Villager A and B a few dozen times, Dragon Knight Saga gives you an actual village, complete with gossipers, philanderers, military deserters, the occasional secret murderer, and even a few normal people.

The Mindreading skill drives this concept home, as you always have the option of incurring an XP debt in exchange for a peek into pretty much any NPC's thoughts. Doing so will net you a bit of color dialog to further flesh out the game world at the very least, and in some cases you'll get tangible benefits such as reduced vendor prices, the locations of hidden items, quest solutions, and even bonus points to strengthen your character's stats.

In fact, if you're the sort of person that enjoys exploration, you will be rewarded. Keep an eye out in a dungeon and you'll discover pressure plates that open hidden passages. Read through a book and you'll discover a clue to the location of an extremely useful item, not as a glowy item in your quest log but simply as something that you discovered and figured out for yourself. Sometimes entire quests will be uncovered for people who truly go out of their way.

The game's tone is downright enthusiastic. While Dragon Age had an understated tone that served it well, Dragon Knight Saga goes all out. Instead of hints of gryphons that never appear, you get to see a massive flying fortress right out of the gate - and that's just a glorified bus to get from your training area to the first town. The writing just plain goes for it at all times, whether "it" is humor or excitement or depth, and rarely falls short.

If this review is a bit on the gushing side, well, too bad. Dragon Knight Saga almost flew under my radar, but it turned out to be a lengthy experience that was varied and fun the whole way through.

Cabela's Dangerous Hunts 2011
I didn't realize that hunting was as frantic as House Of The Dead, only with more to shoot and none of the danger. 3/10

Nail'd
They fail'd to make maps with enough visual cues to keep players from getting impal'd on guardrails at every turn. 5/10

Create
No, I'm paying for the game, so you go ahead and create something that's actually fun. 4/10

Golden Sun: Dark Dawn
I was going to be clever and review the game with an emoticon, but I think GamePro would sue me. 7/10

Nine Hours, Nine Persons, Nine Doors
That title was designed to plant the subliminal message in reviewers' minds "Nine out of ten, ninety out of one hundred". 8/10