The Kinect is finally here, and Microsoft's hands-free peripheral been getting everyone so excited about motion-based gaming that a few people momentarily remembered the Playstation Move.

The hardware itself is fascinating, but what's the actual first time experience like, and do the launch titles take full advantage of the technology? Here are a few thoughts after my first week with the Kinect.

Setting Up The Sensor 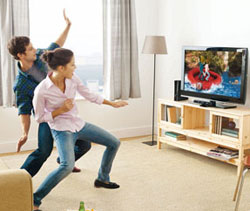 You'll want at least seven or eight feet of unobstructed space between yourself and the Kinect. If you have a small living room, consider opening a window and standing outside, or demolishing a wall. If neither of these options are available, you might want to move a coffee table to make room instead.

Calibration is painless. When you boot the Xbox 360 for the first time after plugging in your Kinect, you'll need to stand perfectly still for seven minutes while your features are scanned and unfavorably compared to your avatar.

A Word About Safety

Do NOT attempt to use the Kinect while fending off a knife-wielding home invader. Too much movement on the screen at once can induce seizures in a small percent of game players.

Kinect Adventures!
I would argue that while rafting is an adventure, kicking balls at hay might not qualify. 7/10

Kinect Joy Ride
Like a real joy ride, the first fifteen minutes are a blast, then the doubt and regret take hold. 5/10

Your Shape: Fitness Evolved
Do yoga, watch a trippy representation of your skeletal system do its thing on a badass Arizona Green Tea bottle. 7/10

Sonic Free Riders
If the past decade of Sonic games were a cry for help, the release of a game alongside a new peripheral was a self-inflicted shotgun blast in the mouth. 1/10

Dance Central
If you approach the Kinect as nothing more than a modern version of a high-end DDR pad, this game alone makes it worth the purchase. 9/10

Kinect Sports
You can wave your arms like a crazy person while running track events and break a bowling alley by throwing the ball overhand, and that's good enough for me. 8/10

Kinectimals
Sometimes it seems like this is about to become an actual game, which just makes the whole experience even more of a letdown. 4/10

Adrenalin Misfits
More fake attitude than every game from the 90's put together. 1/10

Fighters Uncaged
Kick, punch, it's all in the mind- AH JESUS MY HAMSTRING! 6/10

Dance Masters
Featuring the talents of Not Lady Gaga and a version of you that looks like Princess Leia on R2D2's projector. 5/10

The Kinect works surprisingly well as long as you set it up properly and refrain from spazzing out while giving the system commands. It's a remarkable piece of technology with a handful of worthwhile games and very few exciting titles on the way.

As is the case with the Move, developers seem to be taking a wait-and-see approach, making the perceived long-term value of the peripheral plummet, leading to a potentially smaller market for software.

If the positive buzz can sustain the Kinect through this holiday season and get the thing into more homes, that will hopefully lead to more software announcements.

On a personal note, I'd like to see some strange, experimental stuff pop up. How about an adventure or role playing game where your movements correlate to the on-screen character at all times, with his or her posture and demeanor impacting the flow of conversations?

Football Manager 2011
I have no idea what I'm doing with this game, but giving little AI dudes vague instructions and watching them go is a woefully underrepresented gameplay concept and the menus look very pretty. 8/10

Call Of Duty: Black Ops
I love the aesthetic of this series, but the gameplay occupies a space between Rainbow Six and Battlefield that doesn't bring anything new to the table aside from a faster pace and persistent multiplayer leveling. 7/10