Questions That Must Be Answered at E3

Even when E3 is at its absolute lowest and it makes you feel rotten about the direction of the industry, an unintentional honesty occurs every time companies find themselves in the position of addressing their audience and the things they think that audience wants. 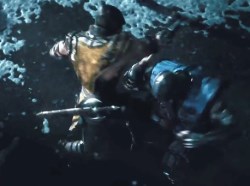 Mortal Kombat X: Actual footage!!! (of a render)"Here's why you should be excited about our games! It's a meaningless tech demo of an old guy's face. Or maybe you'll enjoy a weird dude talking about police brutality as we dim the lights. Or a clearly pre-rendered video that we're passing off as actual gameplay. We don't think you're smart enough to know the difference. Or maybe it's a developer playing their video game on stage, pretending to be surprised by something that happens, because the game is just that dynamic."

Let's say you don't share my fondness for the ridiculous on-stage presentations. E3 is still worthwhile as an event that generates new information about upcoming games. With thousands of developers and members of the games press packed into one building for several days, someone is bound to stray from their rehearsed answers.

I will not be attending this year's E3, as I have never been to the event and refuse to go as anything less than a guest of honor. It is my hope that others will ask the following pressing questions in my stead. The public demands answers.

How do you get the best sword?

Where do I go in the ice level? Follow up: How do I get to that one platform with the treasure and no obvious route?

What skills should I put the level up points into?

How many guns are there?

What are the hottest tips, secrets, and cheat codes?

Can you shoot that guy in the face or is there a weak spot?

How do you get the achievement?

Which spells should I use my upgrades on?

Is this a new path or am I going in circles?

Is that toilet flushable?

Can I use these rockets? Or is this one of those situations where you only get four in the whole game and you need them all in a boss fight?

What does this key open?

Why is that hell skeleton attacking me?

Watch Dogs
A game-shaped product that may be enjoyed by many individuals who do not care about creativity or quality. 5/10

Tropico 5
When people are used to accepting the shoddy scraps that have been tossed down to them from on high, they sometimes convince themselves that it's what they want - oh, sorry, I thought we were still talking about Watch Dogs. 7/10