"Oculus CEO Brendan Iribe just told an audience at TechCrunch Disrupt about one lofty possibility for the pair: building a massively multiplayer experience for one billion simultaneous users. 'This is going to be an MMO where we want to put a billion people in VR,' he told attendees."
- The Verge

First of all: Of course the event was called Disrupt. Of course.

What's the core concept of your game?

Great question. Basically the idea is it's going to be a zillion times more successful than anyone else's game. That's the concept. It's very compelling. This is subject matter that we truly care about. A billion people is a lot of people, so it's going to have that many players at least.

Well, what's it about?

Don't know, don't care. When the time comes we'll buy some people to figure out the unimportant details.

Something else stood out to me:

Screw the PC and consoles. They're small potatoes. Oculus and Facebook seemingly want to take that sweet cell phone market and... put a VR headset on it, I guess?

Yeah. At least a billion people will buy the Oculus headset and feel great about plugging it into their sleek, highly portable phones. That will be the first step. Then there will be a full-scale game that will run smoothly on cell phones. Not a little distractionary puzzler that asks idiots to buy sugar crystals with real money to make zombie plants grow faster. An MMO that people will play for hours at a time. Let's ignore the question of how such a game would be controlled. 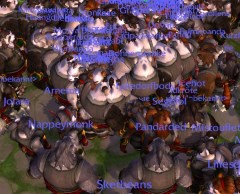 Unless the world was one hundred times larger than WoW's, this is what a billion player MMO would probably look like.Part of this pipe dream hinges on the assumption that a VR headset would be able to make communication in virtual worlds much more natural by somehow incorporating your face and presenting it to other people. I'm not sure if the fine folks at Oculus are aware of the object that they are developing, but it's essentially a thing that goes on top of your face and covers it up. The whole point of virtual reality is the retreat from our world into immersive solitary experiences. The headset actively blocks anything else.

Let's say I'm wrong, though, and this billion user MMO happens. In that case, who would have guessed that game development was so easy? Maybe some of you small time designers out there would be happy to sell ten million copies of a game. Well, you should rethink your pitiful lives. You've been going about this the wrong way for years. There's a lesson to be learned from the level heads at Oculus.

I'm going to pick a developer who most of you are familiar with, Tim Schafer. Here's how he might have designed a game in the past:

"Hey guys, I've been jotting down character, story, and thematic ideas in this notebook for years. I think we have some fun stuff to work with. Let's bring in some of our ridiculously talented artists to visualize these concepts. We'll get super inspired by their work and collaborate on the direction of the game. I have complete faith in the creativity of this studio."

Now here is the correct way for Tim to design a game:

"Hey guys, my idea for an adventure game is that it's the best-selling adventure game ever made. Pretty good idea, right? I'm thinking it should sell more than the latest Call of Duty and Grand Theft Auto installments combined. That sounds like a very nice game."

I've been thinking about this ridiculous story and some of the abysmal things that have happened over the last few years.

Maybe the compulsion to make everything the absolute biggest anything ever is unhealthy. Maybe pouring so much money into AAA titles that they need to sell zillions of copies and fire entire studios just to break even is also unhealthy. Look at the recent announcement that the budget for Destiny has reached $500 million, prompting Bobby Kotick to remark "the stakes for us are getting bigger" as if this is simply a strange and unexpected thing that an outside force flung into the company's lap.

Maybe it's weird that we obsess over sales figures and treat money as a trophy for companies to win, when we should care about how all that money seems to disappear instead of funding stable studios with secure long term jobs for developers.

Nah. One billion is a very big number. It's way more than ten million. We shouldn't stop to think until every game needs to be purchased by the entire population of the Earth to be considered a success.