You can stop sending me all those e-mails now, because AMF Extreme Bowling is finally hitting store shelves in mere days! The single most anticipated release since Paintbrawl Extreme, AMF Extreme Bowling is poised to become the best selling game of all time. We've read the previews, downloaded the trailers and watched them countless times, and daydreamed about what it would be like to play the game. Now all that's left is to camp out at our local software retailer and pray that we're lucky enough to walk away with a copy of the game in hand.

Good luck everyone, we'll have live coverage of Extreme Bowling's launch day and our first impressions of the instant classic as soon as possible!

Touching Is Good, Stealing Is Bad

Over 12,000 black Nintendo DS lite units have been stolen in Hong Kong while en route to Europe. Nintendo is confident that they will recoup the lost profits from these stolen systems when the people who come to own them purchase entirely legitimate and legal DS games. In Hong Kong.

This update to Hitman: Blood Money fixes a number of bugs and improves a numerous aspects of gameplay, making your time as a remorseless killer as enjoyable as possible. 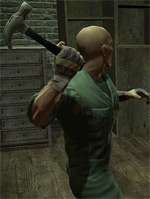 Jaws Unleashed
Because when you think of Jaws, the first thing that comes to mind is collecting keycards and fighting a corporation. 2/10

Rise & Fall: Civilizations At War
You got your third person action in my real-time strategy, and I got my sloppy game design in your boring gameplay. 5/10

Secrets Of Da Vinci: The Forbidden Manuscript
Da Vinci's biggest secret: his goal in life was for his name to be used to sell horrible books, movies, and games. 5/10

Grand Theft Auto: Liberty City Stories
If you play only one PS2 port of a PSP game with absolutely no upgrades this year, I guess this will have to be it. 7/10

Cars
When the racing segments are the worst parts of your racing game, you're either doing something horribly wrong or working on a movie tie-in. 3/10

Major League Baseball 2K6
If you're totally into mediocre baseball games that have already been available on other consoles for several months, this game will blow your freaking mind. 7/10

Metal Gear Solid Digital Graphic Novel
Read a digitized comic book drawn by an overrated artist and search every pixel for meaningless hidden items, or save $20 and get the same experience by poring over your old Youngblood comics with a magnifying glass. 4/10

Astonishia Story
This game is so generic and paint-by-the-numbers that they might as well have just sold a piece of cardboard reading: "Remember all those rpgs you played before? Yeah, those were pretty cool." 4/10