You just bought Homie Rollerz for the Nintendo DS, and you think you're ready to race with the big boys like this? 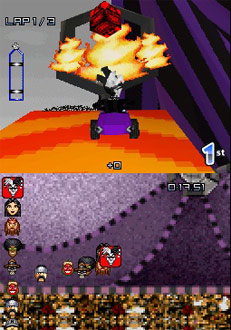 Not so fast, homie! Before you rollz, you need learn how to crawlz. Although most people are eager to jump into the action and never look back, choosing a racer that suits your playstyle is very important to your success as a rolling homie. 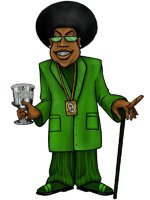 Sporting a unique look that screams "I'm an individual that refuses to be grouped in with broad stereotypes", Mac Daddy has an afro, gaudy jewelry, a pimp cup, and a superfluous cane. He makes the perfect choice for skilled players who have never personally come into contact with someone of another race.

A large latino with an oversized mustache and an equally oversized pair of pants that have been hiked up to his tattooed nipples, Big Loco is a complicated man. A lot goes on under the bandana that's wrapped around his head, solidifying his position as the thinking man's Grande Crazy.

Sure he's capable of working his way up from the back of the pack with his Tailpipe Probe ability, but I find Alien Ese's character design sort of insulting. Green skin, almond-shaped head and large black eyes? Isn't that a little insulting? I'm surprised that the designers dropped the ball after approaching the other characters with so much respect and creativity.

Ay yi yi! Look out, hot pepper in a sombrero and flip flops coming through! 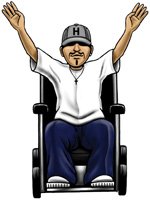 An all-around solid racer with one distinguishing feature that sets him apart. Instead of driving a car, Willie must crawl around each track on his belly.