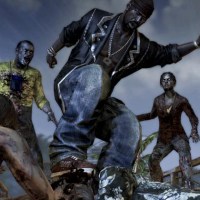 Before we introduce the changes and bug fixes in this version of Dead Island, we would like to thank our customers for their patience.

Sure, we accidentally released an old version of the game at launch, then asked everyone to re-download the whole thing only to realize that this time we had uploaded a DVD rip of Robocop 3.

You, however, stuck by us, and we truly appreciate that. It is our sincere belief that Dead Island is now the open world first person zombie action-rpg that we set out to make.

Warhammer 40,000: Space Marine
An insane, genuinely thrilling third person shooter that replaces "stop and hide behind cover" with "barrel into crowds of dudes, punch them in the face, and saw them into pieces to recover health". 8/10

Tropico 4
If you liked Tropico 3 and are willing to pay for a slight graphical update then you are a crazy person, but for everyone else this is a decent way to dive into the series. 6/10

Hard Reset
More money and effort was spent on the insane animated menus and in-game UI than the game's marketing. 7/10

Gears Of War 3
Now I feel bad for saying that Gears Of War 3 was an unnecessary sequel - it's still unnecessary, but it's more god damn fun than a cover-based shooter has the right to be in 2011. 9/10

Dead Island
It's not the fascinating trailer, nor is it a straightforward shooter, but it is broken as fuck and extremely satisfying in spite of itself when it all manages to come together. 8/10

The Gunstringer
The second best use of the Kinect after Dance Central, though to be fair the previous holder of that distinction was Kinectimals. 7/10

Resistance 3
The game that Resistance 2 should have been, which is to say that it's prettier with a marginally less painful forced story, and that you'll forget about it shortly after completion. 6/10

We Dance
The one thing this game had going for it was that it could have been called Wii Dance, and they couldn't even get that right. 3/10