Why Must Orcs Die? 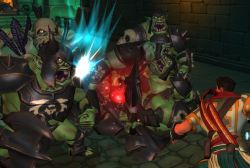 I've been looking forward to Orcs Must Die for quite some time. Your character takes on hordes of Orcs by utilizing weapons, magic, and traps that can be upgraded and combined. The art design is fantastic. The violence is goofy and fast paced. There is more variety and depth than Gears Of War 3's Horde mode.

In other words, it's an unofficial sequel to the SNES version of Home Alone. Sounds fun - until you consider the game's message.

Why must Orcs die? What could they have possibly done to justify this level of Orcicide?

The Orc agenda is to live long, happy lives that end peacefully rather than violently. This subversive act is a direct assault on the anti-Orc weapon industry. If the insidious Orcs got their way, thousands of hard working humans would be out of jobs.

Having green skin is a capital offense in Georgia, which you would already know if you saw the finale of the Hulk television series. Why should this impact Orcs that live outside the state? As it turns out, a century old zoning error expanded Georgia's jurisdiction across all fictional realms.

Having to second guess yourself every time you spell "Orc" or "Ork" is really aggravating.

You know how Brink hasn't had a much-needed patch in quite some time, and the company has absolutely failed to communicate with its audience? The guys responsible for that are Orcs.

Space Marine was great, but it only had like two hundred thousand Orks to kill. Now their innocent cousins must satiate the residual bloodlust.

An Orc wrote the recent WWE storyline that centered around Kevin Nash texting himself.

You know the economic problems that have plagued most of the world as of late? It can all be traced back to a single Orc in Buffalo, New York taking advantage of an all-you-can-eat buffet every day for the past ten years.

Orcs are green. You know who else was green? That's right, Hitler's pal Mussolini.

With any luck I'll be stinking the place up with more humor that no one gets and maybe even some pieces that require thinking and fact checking. If you enjoy Video Game Article, keep an eye out for more features. Thanks!

Trackmania 2 Canyon
Usually sequels do things in addition to making a game prettier, like adding a lot of new content or improving gameplay systems - but luckily for Nadeo an army of people have taken it upon themselves to add enough weird stuff make this worth buying. 7/10

The Binding Of Isaac
How does a Smash TV clone with roguelike elements and Zelda dungeons not have as much depth as that combination of genres implies, or even gamepad support? 6/10

F1 2011
I have no idea what I'm doing, but I'm going to go ahead and assume that the people who do understand this space shuttle simulation of a racing game will have a great time. 8/10

X-Men: Destiny
Every few years we need a new example to point to when talking about low effort cash-ins, and thanks to Silicon Knights we're all set until 2013. 3/10

Dark Souls
A brilliant fillow-up to one of the most unique and satisfying gameplay experiences of this generation, marred only by the fact that there are so many poorly explained systems which present less genuine challenge than confusing bullshit which detracts from the game's actual appeal. 9/10