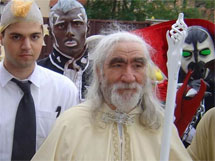 With the launch of Lord Of The Rings Online (or LOTRO Online Rings Game Based On Novels By J.R.R. Tolkien, for short), nerds from around the world finally have a chance to live out their fantasies of being very short and running away from enraged pigs with one another.

For us Pro-Gamers, however, the setting of Middle-Earth means nothing. The game only serves as another outlet to display our superior gaming skills, which can be made superiorer by following this first installment of VGA's new regular feature, Pro-Gamer Guide.

As in all games, performance is the most important factor to keep in mind. You want as many frames per second as possible because that equals more chances to win the game per second. What's the point of being able to see what's going on if it slows your framerate to 129 fps?

Before you get started, go into the settings menu and make the following adjustments:

Resolution: 320 x 200
Color Palette: 2 (black and white)
Textures: None
Details: No thanks
Sound: Disable everything but the noises made by your enemies, then go into the game directory and replace those with wav files of alarms going off.

With a top of the line gaming rig and these settings you should average at least 300 fps, which is a little low but acceptable.

Your character should be a Hobbit, as they are short and are therefore much harder to spot (and target) than the other races. Be sure to choose the "bald" hair style. Constantly rendering hair will put a strain on your system that really adds up over time.

The only viable class to play is the Minstrel. In theory, monsters will take a split second longer to react to minstrel attacks because they won't take a hobbit with a lute seriously. Over time, those split seconds add up, buying you valuable time in the race for the level cap.

Equipment is problematic. It weighs you down, takes time to buy/loot/equip, and makes your computer render additional models and textures. Don't use equipment.

No. Huge waste of time. Have you learned nothing?

First, grab every single quest that's available in your current zone, being careful not to waste time by reading the quest descriptions. Next, work your way around the entire map in a circle, killing everything you see. Chances are you'll kill enough monsters to finish most of your quests. Turn in everything you've completed, then shout "WHAT THE HELL HOW DO I LEAVE THIS SHITHOLE" in general chat while running in a random direction. Time spent standing still is time wasted.

Someone will tell you where to go next.

Aside from the above example, you should never interact with other people. Much like the detailed game world and the immersive lore, other people just weigh down your rocketship to the level cap and the superstardom that comes with it.

If you absolutely, positively MUST join a Fellowship to complete one of the more difficult storyline quests, never slow down for anyone don't say anything other than "GO GO GO", "COME ON", "HEAL ME", and "YOU SUCK".

When you see a tater on the ground, you pick that fucker up. No excuses. It doesn't matter if you're in combat, running a timed mission, or cybering with an elf (while running, of course; never waste time). Those taters are a status symbol. When other people begin to hit the level cap along with you, having more taters than anyone in the game will be the only way to validate your existence. 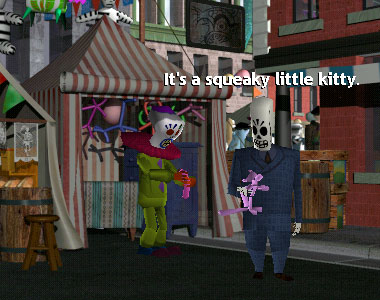 Bust-A-Move Bash!
Because the Wii doesn't have nearly enough rehashed franchises that completely ignore the potential of the Wiimote. 3/10

Lord Of The Rings Online
The greatest implementation of the lute as a weapon since that time I got kicked out of the renaissance faire by an overly sensitive (and fat) minstrel. 8/10

Ancient Wars: Sparta
I wonder why a plain (and therefore quick to churn out) strategy game about Sparta would be released now, there's seemingly no reason for it! 4/10

Whirlwind Over Vietnam
Someone please hire me to write video games right now, because my version of Whirlwind Over Vietnam where a tornado swoops up two opposing soldiers from Vietnam and deposits them in Oz where they learn to work together is way better than this chopper sim. 5/10

Air Battles: Sky Defender
A surprisingly good WWII flight sim for those gamers on a budget, and the lack of multiplayer won't present a problem since poor people don't have any friends. 7/10

Cube
The puzzler that asks: Are you intelligent enough to overcome this ridiculous camera and see what the hell you're doing? 4/10

Aedies Eclipse: Generation Of Chaos
You get a point taken off your crappy game just for making me type that ridiculous title. 4/10

The Fast And The Furious
If you go fast enough, you can travel back in time to when the franchise was mildly popular, or ten years earlier when the gameplay would have seemed exciting. 5/10

Pocket Pool
From the makers of "Monkey Spanker", "Pull My Finger (I Will Fart)", and the highly anticipated "Unemployment Claim". 2/10

Valhalla Knights
The deeper you grind your way into the dungeon, the sleepier you get. 5/10

Pokemon Diamond
Changing the core gameplay mechanic from "gotta catch 'em all" to "gotta hide in a bush and yell racial slurs at' em all" was a bold move, but it paid off. 8/10