Blizzard posted a mysterious countdown on their website to generate publicity for the announcement of a new game this Saturday. Against all odds, it worked. This week the internet has been a hotbed of speculation and arguments, breaking its long-standing reputation for patience and level-headed discussion. Is Starcraft 2 or Diablo 3 in the works? Or maybe a new MMO set in either universe? Is it okay to stand at the foot of my sister's bed and watch her sleep? The internet needs to know.

It's impossible for me to cover the announcement itself since this article will be published a few hours before Blizzard's big reveal, but I can use this opportunity to prove how rock solid my industry contacts are.

You see, my sources within Blizzard have been supplying me with detailed notes from high-level production meetings. Tons of project ideas were pitched during these meetings, and while I may not know which one got the green light, I can guarantee that the game that will be announced today is somewhere in these notes. 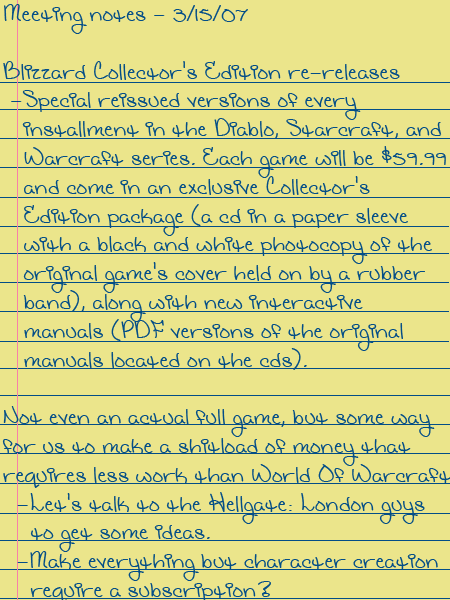 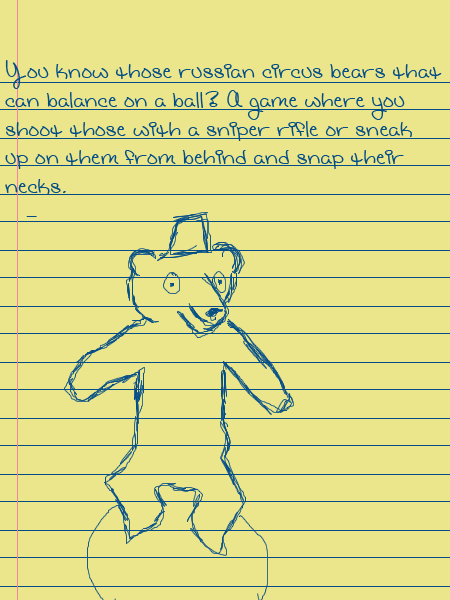 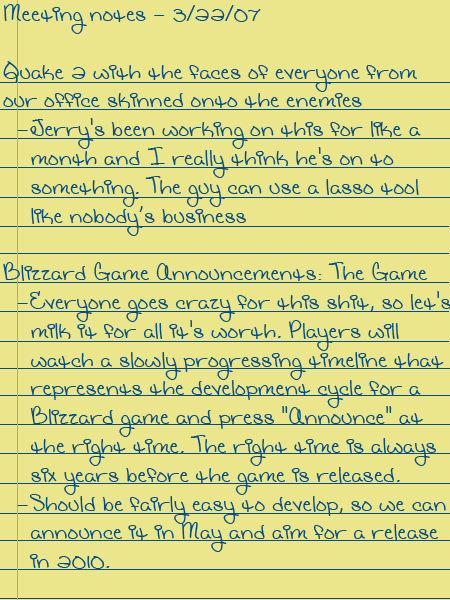 Also, Starcraft 2. The notes for that game idea were so voluminous and detailed that they wouldn't fit in this article, but I totally have them and I'm pretty sure that's what Blizzard's next game will be.

Lowtax, how do I get rid of these Edit messages? Help, quick!

Super Rub a Dub
Following the announcement that Metal Gear Solid 4 has been pushed back to a mid-2008 release, this rubber duck sim's only competition as the PS3's killer app is Folding@Home. 2/10

UFO: Extraterrestrials
Instead of failing to do what X-Com pulled off 15 years ago, maybe all these companies should start off with something easy like Alley Cat or Sopwith and work their way up. 4/10

Theatre Of War
Real-time strategy that's so slow paced it might actually be turn-based, but I mean that in a good way. 8/10

Penumbra: Overture -- Episode One
I'm not sure what's scarier - the frights in this game or the fact that it's so dark I actually played with my monitor turned off for half an hour without realizing it. 6/10

ArmA: Combat Operations
Operation: Flashpoint got a facelift, but elected not to have anything done about the curable neurotic condition that causes it to make jerky movements. 7/10

The Red Star
A pretty darn challenging beat-em-up that actually has very little to do with menstruation. 8/10

.hack//G.U. vol. 2//Reminisce
When you have enough material for one and a half games but you stretch it out to make a trilogy, you make anime proud. 4/10

SBK'07 - Superbike World Championship
Hardcore racing sim fans will bemoan the lack of an option to change each bike's gas cap and casual racing fans will be frustrated at the lack of a loop-de-loop, but their creepy love for digital babes in skimpy clothes will bring them together. 7/10

Driver '76
Has absolutely nothing to do with the ten year old pc game Interstate '76, which has this stinker beat in the graphics department as well as every other department. 3/10

7 Wonders
One of the featured wonders: Does changing the name from Bejeweled to 7 Wonders constitute enough of a change to keep PopCap from suing you? 4/10