It's my first night as a guard here at Plot Point Manor, but I can already tell this is going to be a sweet gig. There's only one path that a criminal could possibly take through the property. Once you get past certain checkpoints, it's physically impossible to go backwards. How? Beats me. There must be some magic at work protecting this place. Even the act of climbing onto ledges and windowsills is limited to specific anchor points.

Well that was an interesting start. My route took me past a door where two people were having very explicit sex. They kept describing the act in detail, and seemed to repeat the conversation as if on a loop. Well, I suppose no one can say this manor isn't mature. 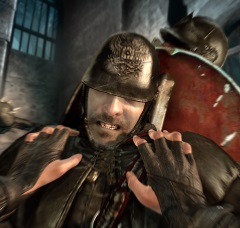 Curiously, the volume of their conversation didn't lower as I walked away. I need to get my mind off them. Think I'll go find another guard and talk about penis piercings. No, I am actually going to do that in great detail and if a thief happens to be nearby they will hear the conversation.

Huh. That was weird. I was just standing with my back to a door when it opened, slowly pushing me aside. I let it happen, my feet sliding and my posture not changing at all as I continued to stare straight ahead. While the view changed I thought about how odd it was, since no one should have been in that room.

Going to continue my rounds, though I am slightly troubled by the incident.

Saw someone. Pretty sure it was a thief. He was crouched and wearing a thief's clothing. Bugger wandered out of a shadow directly in front of me. I began to yell, but he stepped back. No harm done. Back to my route.

Stood still while a cutscene happened somewhere else in the manor.

It was odd, the entire world freezing like that. I get to relax, though, and still get paid by the hour. Even better, these things supposedly happen all the time. One of the other guards say that for every ten minutes that a thief might be prowling through the manor there's another fifteen minutes of cutscene time.

More suspicious activity. I keep hearing someone walking around. The strange thing is, their footfalls make exactly the same noise whether they seem to be coming from outside on the stone, inside on a carpet, or on wood. Exactly the same sound. If I didn't know better I'd think the universe is lazy and/or broken.

My patrol route took me through a darkened area. I'm no scaredy cat, but in the shadows I experience an eerie sensation.

You know how it feels when you know you're all alone, but you'd swear someone was watching your every move? It was like that, but I was also getting smashed in the face by a blackjack dozens of times. As the blows rained down upon my face I stood perfectly still and watched for intruders.

Didn't see anyone, though.

Holy shit, I saw a thief! Chased the scoundrel to a dead end containing a single closet. I saw the closet door shut.

Scratched my head and walked away. This place is full of mysteries.

I just spoke to one of the guards from the upper level. He says a thief came through here. Hardly took anything. Just made a beeline through the only entrance, fought every guard he saw along the way, slowed down time to execute cinematic kills, and left through the only exit.

That doesn't sound right to me. Is someone that does all that even a thief?

Thief
Hello, we put contemporary features and concepts in a game without seeming to understand why, and now we would like you to buy this thing because its visuals are fine and it mostly functions. 4/10

Castlevania: Lords of Shadow 2
Strange, it seemed like there was so much untapped potential Lords of Shadow's rich lore and in the genre of God of War clones. 3/10

Donkey Kong Country: Tropical Freeze
We live in a world where there are more reasons to own a Wii U than an Xbox One, and can we figure out a way to broadcast that message back in time to the beginning of 2013 just to see the looks on our faces? 7/10