I Got a Cat 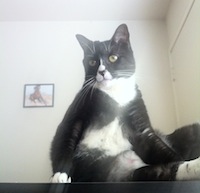 The best part of being an adult is probably the fact that in your day-to-day life, there are really no rules whatsoever except for our society's laws. I sometimes forget about this freedom and it'll strike me all over again that I'm 28 and can eat the largest, most disgusting burger anytime, day or night, if I so choose. Or that I can pull an all-nighter doing absolutely nothing just because I want to. It's a very special kind of feeling. Kids are losers in that way, and reminding them of that is probably another thing you could do with your freedom. Anyhow, a couple of months ago it came to an interesting turn when I realized: Wait, I could totally just go get a cat and bring it home, and nobody can do anything about it.

I've never really been a cat person at all, but I live in one of the smallest apartments I know of, and I didn't have enough faith in my ability to train, say, a bulldog, to shit neatly into a box. Cats would be more appropriate for my situation, so I started looking around on shelter websites and craigslist. The main problem with craigslist is that there's a "no selling" rule when it comes to pets, but bad people get around this by requesting a "rehoming fee" which is also known as "money in exchange for a pet" because as I stated, they are bad people. Dogs and cats are everywhere, dude. I don't need to give you $150. I could just let any cat ever into my house and it becomes my cat. That's how it works.

Shelters are super noble and good, but most if not all of the ones I'd looked at seem to have some kind of interview and questionnaire process that I'd have to adhere to in order to get one of their many cats. I suppose it's for a good reason, but as anyone who has ever interviewed me for a job or been on a date with me can tell you, I'm not good at answering questions about why I'm the best person for some specific situation. I called one of the bigger shelters in town and did what essentially amounts to a phone interview. For example:

What kind of job do you have? Are you home a lot, or do you go away for extended periods?
I write copy and I'm home like all the time. Thanks.

What are you going do with a cat once you get it?
Oh gosh, I don't know. Pet it I guess? Let it hang out near me and stuff? Not hassle it, that's for sure. Not do anything that would cause it to die. I was just going to do cat stuff with the cat, like petting and chilling.

Please provide your landlord's phone number so we can confirm that cats are allowed in your complex.
No, because she will probably tell you about how I was supposed to take care of the plants out front and I let them die.

Do you have any small children or dogs?
If I had that stuff I wouldn't need a cat, man.

It didn't feel like it went that well but they invited me to come by and check out the cats anyway. It was around this time I noticed a really good craigslist pet ad that said simply, "cats need home now. come pick up" with a phone number. I called it, and a woman picked up mid-sneeze to tell me that she's suddenly allergic to her catbabies, and she didn't want any money, she just wanted the cats to have homes. I headed over to her place, we chatted a little bit while she blew her nose, and she introduced me to her two tuxedo cats: Some shitty male cat and Zelda. The latter caught my attention because she wasn't being a dumb idiot running around crashing into boxes, and in fact she was just sorta fat and hanging out on a futon looking at me. I had to respect that because that's pretty much what I'd do if the cat had walked into my place. 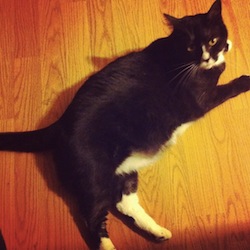 With the small talk continuing, the woman mentioned that she's a working gal-- an actual lady of the night. I'm not one to judge others whatsoever for what they need do to make a living, but this lady was pretty clearly over 60, extremely heavy, and had a really strong tobacco smell coming out of her face that bled over into sour milk smells. Also, I was now in her house. Not being one to visit prostitute apartments myself, I pointed at Zelda and said that it was getting pretty late and I guess we should get home.

So yes, I am the proud owner of a prostitute's cat. I've never seen such a sweet, affable cat in my entire life. She's probably so okay with new people because she's used to having strange men come over all the time. The things she's seen could probably fill an icky encyclopedia, so I make sure to never let her see me naked out of respect. I also bathed her very well. On one of her first nights here she jumped up and snatched a spider off the wall in near-complete darkness. We have a very good understanding of one another's needs, I think.

Her name is now Jub-Jub. She goes to the bathroom in a box and then when she is done shitting in boxes, she comes up and puts her ass in my face. She's fat and sedentary and has the time of her dang life looking out the window and meowing at the guys who walk by. She also goes by Jubs, Steve Jubs, Jubstep, and You Stinky Fat Cat. We have a lot in common, and now I could tell people I was given pussy for free from a prostitute. I don't say that, though, because it's really gross.