In a twist worthy of M. Night Shyamalan himself, we present three reviews for films of increasing quality, starting with Joseph "Jay Dub" Wade's disappointment in Easy A, following with Ian "ProfessorClumsy" Maddison's unexpected delight at Devil and finishing with Martin R. "Vargo" Schneider's unbridled enthusiasm for The Town.

EXPECTATIONS: Easy A looks like Hollywood's latest attempt at making us believe that a hot, 20-something redhead is what passes for an average looking high schooler these days. It seems pretty forward in admitting that it's borrowing some key aspects of the plot from The Scarlet Letter, so I won't hold that against them. However, the movie's tagline doesn't inspire much confidence: "Let's not and say we did." It's always saddening to see movie advertising make the lame jokes so the critics won't have to. I really hope it won't prove to be apt.

REALITY: Watching the events of Easy A unfold might easily wind up being ninety of the most obnoxiously cringeworthy minutes I've had to endure in a multiplex all year. It isn't that the movie is dumbed down, poorly written or just plain terrible like many movies about high school tend to be. In fact, it's a very smart movie with a number of equally strong performances. The problem is that it often goes out of its way to try and sound smarter than it is, and then acts like if it ever lets up it might fall flat on its face.

The movie opens as Olive (Emma Stone) recounts to her best friend about the weekend she spent with a college guy she just made up. Word quickly spreads, and soon she has the school talking about how slutty she is. The situation is made considerably worse by her agreeing to have fake sex at a party to help raise a gay friend's social status. Soon, Olive discovers she can capitalize on her notoriety by letting guys say they slept with her in exchange for an assortment of gift certificates (Why? Is it because teenagers have no concept of real money, or is it to make her seem less like an actual prostitute?).

This behavior brings about a host of problems and drama, most notably the ire of the school's bible thumpers (led by Amanda Bynes) as well as that of the faculty (Thomas Hayden Church, Malcolm McDowell). Will Olive find a way to unravel her nasty web of lies before someone gets hurt? Does the scarlet A on her outfit actually stand for "Adultery"? Do her parents even really give a shit? These are the tough questions Easy A seeks to answer. 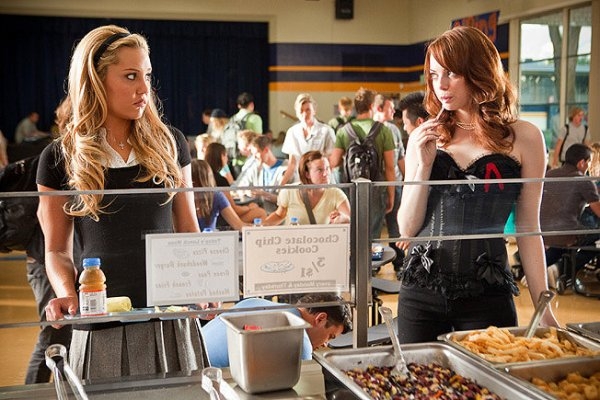 Okay, first things first: Emma Stone does a bang-up job in this movie. She breezes right through every one of her lines and makes each of them sound like an actual, cogent thought. Equally spot on are pretty much all the cast members over the age of thirty. As Olive's parents, Stanley Tucci and Patricia Clarkson bring a bizarre sense of humor to a movie that very nearly forgets it's supposed to be a comedy. Sure, they fit into the "weird mom and dad" roles a bit too readily, but they at least look like they're having fun. More fun than the kids playing Olive's classmates. These people aren't funny, charismatic or even particularly interesting. I almost have to wonder if that was by design, as though any one character with half an ounce of wit might threaten Emma Stone's stranglehold of the spotlight.

One thing that's usually said about the teen comedies that stick around is how there's considerably more depth to these films than is readily apparent. Most of these movies are shallow by design, because what teenager isn't shallow yet masquerading as deep? However, there are the rare few (think Breakfast Club, Clueless, Mean Girls) that do manage to touch upon something more relatable than "The world is against me, so watch me be a dick for ninety minutes." A lot of the critics are making this same claim about Easy A and, frankly, I just don't see it. Sure, the general moral of the movie is pretty easy to pick up: Don't lie to people, and for the love of God, don't lie to people about fucking.

The movie shows hints of depth at times, particularly when we see the rumor mill at work which fittingly enough looks exactly like time-lapse photography of someone wandering through a schoolyard. For the most part, though, Easy A seems as utterly shallow and self-absorbed as the people at whom it so gleefully takes potshots. The movie aspires to the glory days of Sixteen Candles, but it seems little interested in actually getting there herself. 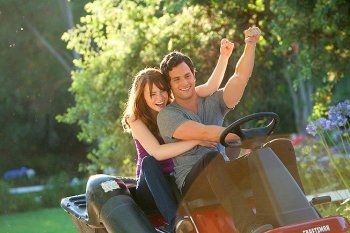 Yeah! Mowing the shit out of this lawn!You know what? As of today, I'd like to announce that the '80s are officially over. It's been twenty years; I think we can let it go now. John Hughes is long gone, Duckie sold his soul to CBS, and Ferris Bueller went to Broadway. It's over. It had a good run. Now let's move on and start ripping off some movies from the '90s for a change. People are calling Easy A clever for satirizing and commenting on the teen comedies of the '80s, when really it's just using them as a crutch. After realizing that sophomores weren't going to sit through an actual updated retelling of The Scarlet Letter, the filmmakers decided instead to insert line after line of Olive talking about how she wished this part of the movie had been more like Say Anything, or why can't life be more like Sixteen Candles, or you know what? Fuck it, let's have a poorly conceived musical number because that's what Ferris Bueller did.

The movie is only ninety minutes long. It's not like we have time to kill. Stop wasting your time fawning over other movies and get on with the one you're in already. I'm all for self-awareness in movies these days, but when your ending consists of references to three of these movies stacked on top of one another just to see how meta you can get, it's safe to say you have no intention of staking your own claim in this territory. Easy A talks a big game and talks it well, but it winds up standing on the shoulders of mopey, sensitive giants.

MINORITY REPORT: If anything, this simply serves to remind me of my own schooldays, during which I would offer to lie for the other boys and simply say that they buggered me instead of having them actually do it. It didn't occur to me at the time that these boys were not buggering me for social reasons, but merely for immediate gratification. As you can imagine, my school reunion ended somewhat messily. - Montague "Legally Sane" Smythe