X-COM: Disappointment From The Deep

Unsurprisingly, No Mutants Allowed ruined everything.

Some people are so overly cynical that they go out of their way to complain about anything, such as those members of the Fallout-centric forum that whined about the series' move to 3D and went on lengthy diatribes explaining how turn-based combat was way more realistic than real-time combat.

There are also, however, reasonably skeptical people, like those who felt that Bethesda didn't exactly have a great track record when it came to putting together creative quests, believable NPC interactions, a tone that properly gelled environment with story, or any gameplay mechanic that didn't require player-created mods.

Turns out those people were right. Fallout 3 had an incredibly detailed world and VATS was solid, if not as polished as it could have been (melee was barely implemented, and targeted attacks should have resulted in way more feedback in terms of variety and personality), but the RPG parts were shit. Any tale that wasn't told through the environment fell flat due to poor writing and Bethesda's patented "you're talking to a mannequin" implementation of dialogue. The world was at its emptiest when you were with other humans, and the humor never really came through in the right way.

Unfortunately, every reasonable concern on No Mutants Allowed was drowned out by outbursts from bitter nerds that were too emotional to find actual things worth complaining about. As a result, the website became synonymous with people who fear change. In fact, the overt cynicism made such an impact that it is now impossible to be skeptical of a sequel or franchise reboot on the internet without someone replying, "When did this place become NMA?" or "I guess it's popular to hate on new things." 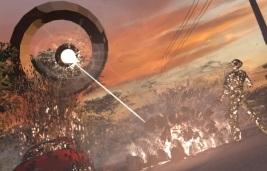 After BioShock 2, 2K Marin changes pace with a first person shooter with a 1950's aesthetic based on someone else's property.Case in point: The very silly news that 2K Marin is making X-COM into a "story-based" first person shooter that promises to be "immersive" and a "gripping narrative ride".

Reactions have been overwhelmingly negative. There are plenty of jerks bleating about my childhood and how this game will be the absolute worst. Unfortunately, a lot of valid points are being swept under the rug, such as:

It's been a long time since a game like the original X-COM has come around. Why not make an update - not just more of the same but an evolution of the concept that stays true to the original's spirit, something that will do what Civilization IV did for its series? I can only imagine that the reluctance to do so is based on the (in my opinion, bogus) belief that there aren't enough modern gamers capable of understanding or enjoying a complex strategy game to justify the cost.

Prison Break: The Conspiracy
All you need to know: Quick Time Event tutorial in the first five minutes, teaching you the intricacies of mashing a button repeatedly to break free of a dude that has you pinned against a cell door. 2/10

Tom Clancy's Splinter Cell: Conviction
This seals it, the best stealth game is Batman: Arkham Asylum, but if you like shooting dudes in the head with guns that become completely inaccurate after the first shot and replaying areas because you didn't guess what the game wanted you to do, this is your game. 6/10